CAG reports have pointed out the gap between production targets and achievements. An OFB audit reveals that the average machine-hour utilisation has been around 75%, while the average man-hour utilisation is about 127%, resulting in a 27% additional salary bill. Some of these issues could be overlooked if the OFB were supplying high-quality items. This is one area that the Army, as the biggest customer, has serious complaints about. 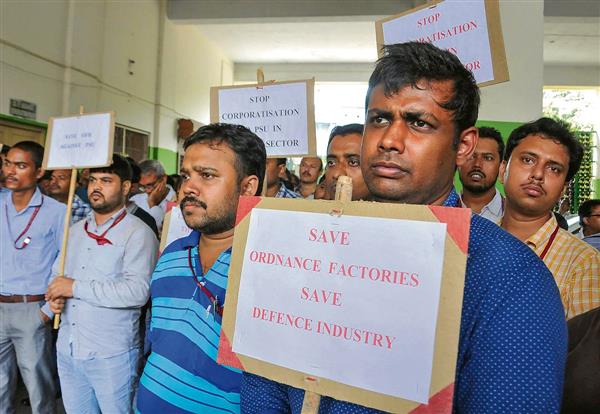 Opposition: The announcement on corporatisation of the Ordnance Factory Board has been followed by a call for an indefinite strike by its employees from October 12.

On May 16, the Finance Minister announced certain structural reforms in the defence sector. Among these was a decision for the corporatisation of the Ordnance Factory Board (OFB) to improve efficiency and enable financial independence. The idea of corporatisation of the OFB has been around for many years, having been first mooted by the Nair Committee in 2000. However, it has faced difficulties in implementation due to resistance by the OFB workers’ unions.

In August last year, an indefinite strike by the workers forced the government to give an assurance that it had not taken any decision towards corporatising the OFB. The Finance Minister’s recent announcement has been followed by a call for an indefinite strike by OFB employees from October 12. The workers claim that they are not opposed to greater competitiveness and self-reliance, but there should be no change in the status of the organisation.

The OFB is one of the oldest organisations in the country, comprising 41 ordnance factories, 13 ordnance R&D centres, and nine ordnance institutes of learning, with about 80,000 employees. It functions under the Department of Defence Production and is a crucial supplier of a variety of products, including armament, ammunition, and personal equipment and clothing. With an annual turnover of Rs 12,000 crore, the OFB is essential in supporting the military’s routine but essential acquisitions.

Precisely because the OFB has such a vital role, it must be ensured that it is run efficiently. Unfortunately, the OFB’s record has been less than satisfactory. CAG reports of the last five years have pointed out that the gap between production targets and achievements has always been above 50 per cent, and in 2015-16, it was as high as 67 per cent. An audit of the OFB reveals that the average machine-hour utilisation has been around 75 per cent, while the average man-hour utilisation is about 127 per cent, resulting in a 27 per cent additional salary bill.

Some of these issues could be overlooked if the OFB was supplying high-quality items. This is one area that the Army, as the biggest customer, has serious complaints about. In May 2019, it was reported in this newspaper that the “Army has sought immediate intervention of the Defence Ministry to check rising cases of accidents involving battle tanks, artillery and air defence guns due to ‘poor quality’ of ammunition being supplied by the OFB.”

The OFB contests the Army’s claims and points towards storage and handling issues that are the responsibility of the Army. However, this finger-pointing does not obscure the fact that between 2014 and 2019, almost Rs 1,000 crore worth of faulty ammunition and mines have been destroyed. Defective ammunition not only causes accidents involving casualties but also erodes confidence among the soldiers. I recall that troops engaged in counterterrorism operations in Kashmir were very frustrated when grenades would not go off after being thrown at the terrorists.

The problem is not just restricted to specialised items like ammunition, but also to basic products like uniform and boots.

In 2015, it was pointed out to me by a corps commander that most of the infantry soldiers were buying their own boots as the ones supplied by the OFB were unfit for use during long patrols. Poor quality of the uniform led to the Ministry of Defence approving a clothing allowance in 2018 that permitted soldiers to purchase their own dresses.

Another major problem relates to overpricing, and just one example will suffice. An Ashok Leyland Stallion vehicle that costs Rs 17 lakh if procured ex trade is priced at Rs 28 lakh by the OFB. It would be assumed that with a captive market and high overheads, the OFB would be able to turn in some profits, but that is not the case. Each year, the government is forced to allocate money in the defence budget to keep the OFB running.

It was in the light of these serious shortfalls that the government decided on corporatisation of the OFB. The employees are resisting this move, and to arrive at a solution, we must also study their demands. There are concerns about wage cuts, health benefits, pensions, and layoffs if the OFB is converted into a public sector entity.

These are genuine concerns, and the government appears sensitive towards these. It was recently announced in the Rajya Sabha that an Empowered Group of Ministers had been constituted to guide the entire process of corporatisation, including “transition support and redeployment plan of employees while safeguarding their wages and retirement benefits.”

The other issue raised by the workers’ unions is related to “leaving the factories to the vicissitudes of the profit-driven market.” The problems facing the Bharat Sanchar Nigam Limited (BSNL) are frequently quoted. The comparison of the OFB with BSNL is misleading. The BSNL operates in a highly competitive environment while the OFB has a dedicated customer base and specialised expertise in niche areas. Bringing in greater efficiency will only strengthen its market share, not reduce it.

A word of caution needs to be injected here. Any future corporatisation must look at bringing in professional management and adopting the best market practices. The board must not become a lucrative parking slot, where one set of bureaucrats replaces another set. This practice has been the bane of many public sector undertakings.

The OFB has expertise and capacities in areas that are indispensable for the military. The problem is not that we do not need the OFB, but the slipshod attitude and practices that have crept in, and a lack of concern for quality control and user satisfaction. In times of stressed budgets and hostile neighbours, any restructuring that addresses these aspects should be welcomed.