Over 170 policemen in Maharashtra, more than half of that number in Mumbai city alone, have died of the virus in the past five months. They were mostly in the upper age bracket. They had been on the streets continuously without relief since manpower was short for such a prolonged deployment. 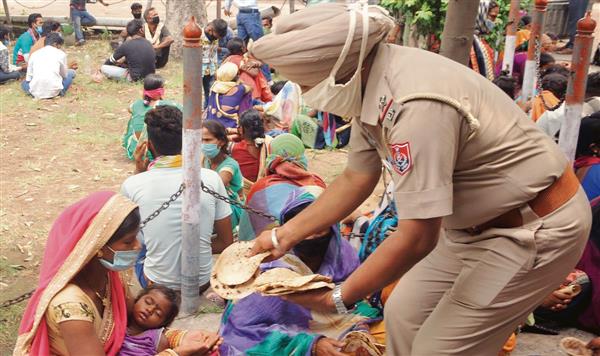 Commendable: During the lockdown, policemen took on the responsibility of providing meals or rations to the needy.

On August 12, my young friend Nitai Mehta, founder and chairman of the NGO, Praja, invited me to a webinar on the topic of the ‘Role of the police during the Covid lockdown’. Will the police role change after the pandemic is controlled?

Nitai also invited a serving police officer, Naval Bajaj, Joint CP (Admin), Mumbai. Hats off to Bajaj. He spoke well and he spoke a lot of sense. Nitai had a series of webinars beginning on August 11 and ending a day before Independence Day. There is a talk by an urban planner, Shirish Patel. It was simply brilliant!

Another webinar on the same subject was organised by a private organisation on August 29. The DGPs of Bihar, Chhattisgarh, Kerala, Sikkim and the Railway Protection Force participated. Kerala’s police chief Loknath Behera advocated common sense policing at such times and the DGP of Chhattisgarh, DM Awasthi, stressed on humane policing where policemen are told never to use lathis to enforce lockdown rules.

During the pandemic, the police, whose assigned role is basically deprivational, got a rare opportunity to endear itself to the people. When Nitai phoned to ask if the police could be roped in to distribute essential items like rice, atta, dal, sugar, salt, oil and tea to starving families out of work and unable to find alternative employment, my co-trustee Sanjeev Dayal phoned his contacts in the police. Immediately, a deputy commissioner of police at the headquarters was appointed by Bajaj to organise the distribution.

The police are best placed at such times to identify really needy families and individuals. All the 90-odd police stations got involved. Officers were earmarked for the task. Nitai’s people acquired the food items from a designated grocery store. The logistics of distribution were laid down by the police. The whole machinery worked as clockwork. All stakeholders won!

People who were rescued from hunger by the police were all praise for the cops. It was not only in Mumbai that the police rose to the occasion. In Punjab, too, I learnt that policemen, and of course, policewomen became saviours by taking on the responsibility of providing cooked meals or dry rations to out-of-work migrants and other hungry families unable to make a living in the time of the pandemic. I checked with Dinkar Gupta, the DGP, if what I was told was correct. He reeled out figures, which he was obviously monitoring personally.

A force that was so feared in better times suddenly turned saviours and friends. Did it require a pandemic, a disaster of sorts, to bring out the human side of the enforcers of law? Every human being has a modicum of love, of compassion, of mercy, of pity hidden away in his psyche.

Does it need a negative event to bring out these qualities? Why cannot police leaders emphasise the use of these sensibilities at normal times? Why can’t these become standard inputs in police training at all levels of the hierarchy?

After the pandemic, policemen will be sent back to perform their normal duties of prevention and detection of crime, regulating traffic and keeping order on the streets. Necessarily, they will wield the stick to keep offenders in check.

This job cannot be entrusted to any other department of the government. Even during the lockdown, the task of enforcing the restrictions devolved on the police. Many of them were rough, sometimes very rough, with offenders. How the top brass plan to train their men to demonstrate their softer side on such occasions is best answered by serving police leaders.

I would like to touch on one aspect of a policeman’s life that has not attracted the attention it merits. Over 170 policemen in Maharashtra, more than half of that number in Mumbai city alone, have died of the virus in the past five months. They were mostly in the upper age bracket. They had been on the streets continuously without relief since manpower was short for such a prolonged deployment.

A policeman’s life is really inhuman as far as hours of work are concerned. Family life, as white-collar workers experience, is just not possible. Mentally and physically, they are at a disadvantage. The public should develop some compassion for the hard life the policemen lead just as we expect the police to be compassionate and just in their dealings with people.

If the government does not think it a priority to make a survey of a policeman’s daily routine, an enlightened NGO like Praja or PCGT (Public Concern for Governance Trust) should embark on such a study.

The public should insist that the government pay heed to the findings if the people are to get better service from its police force. Sending younger personnel to the front and assigning desk duties to the older, more vulnerable, men is one finding the study will surely throw up. But there are other practices the study should expose, like the deployment of trained policemen for unauthorised duties that substantially reduce the number routinely available. Too many men are assigned unsanctioned security duties, VIP bandobast and such jobs for which provision is not made when computing the minimum required.

Sanctioned posts are kept vacant for months, even years, together. No urgency is demonstrated by the Mantralaya to fill those vacancies since money sanctioned is saved.

When a disaster like Covid-19 strikes, the pressure on the cops more than doubles. Since vacancies translate into added pressures on short-staffed police stations, we have a human problem of grave proportions to contend with.

Some non-police participants in Nitai’s webinar suggested that the government should pay attention to the housing and health of the constabulary. I was immensely touched by their concern, as also I was about the steps taken by the police leadership to address these deficiencies, as recounted by Naval Bajaj.

If the people want to acknowledge the valiant work of our policemen during this crisis, they should help in addressing the health hazards of police personnel on a permanent, ongoing basis.