On a more positive note, both Rahul and Priyanka are showing signs of promise. Priyanka has been successful in getting some mind space in UP. Her offer to grant 40 per cent tickets to women candidates is interesting and innovative. The big question is whether Priyanka would muster the courage to contest the UP Assembly polls. 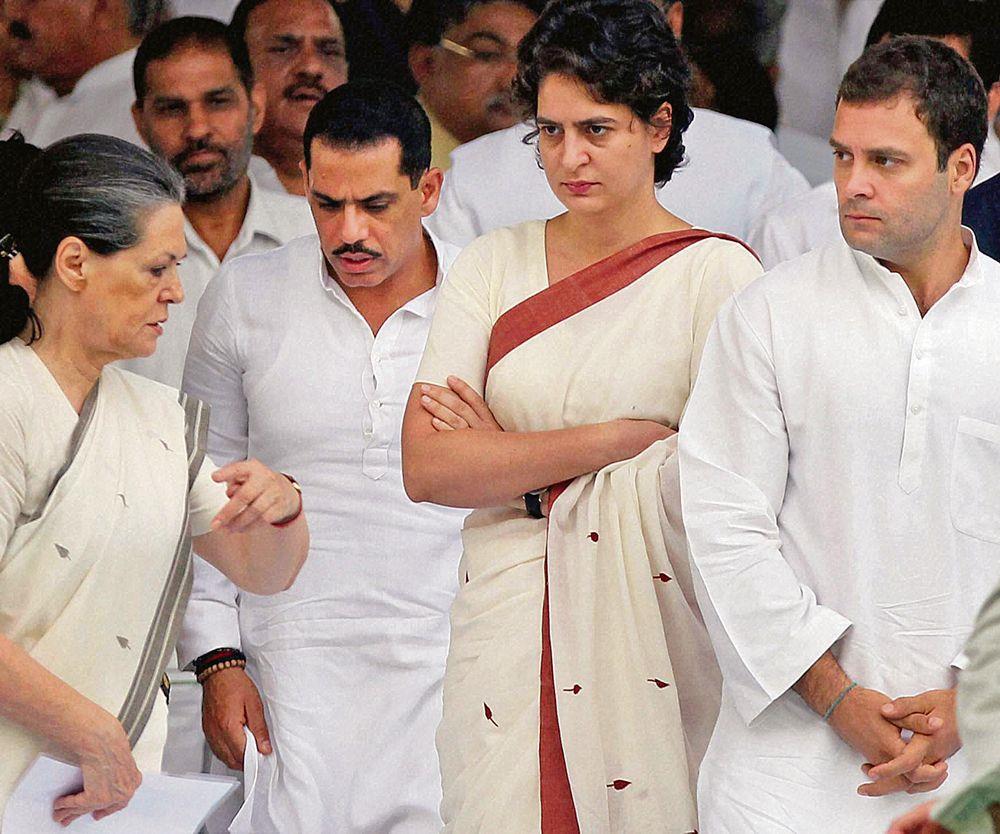 Holding on: No major group of Congressmen has broken ranks despite the 2014 and 2019 defeats. PTI

Amid the many hiccups and disquiet, the Congress under the Gandhi trio — Sonia, Rahul and Priyanka — seems to be getting its act together. The outcome of the 2022 Assembly polls in Punjab, Uttarakhand, Uttar Pradesh, Goa and Manipur is keenly awaited before Rahul Gandhi formally declares himself as a candidate for the party’s presidential polls.

The period between May 2019 (when Rahul had resigned as the 87th AICC chief) and October 16, 2021 (when the CWC announced the organisational poll schedule for the 2022-27 period) was challenging on many counts. The Congress’ electoral fortunes were constantly dwindling. The fall of the Madhya Pradesh government, the desertion of Jyotiraditya Scindia, Sushmita Dev, Jitin Prasada and other leaders, ideological confusion, dissidence and a sense of despondency had reduced the grand old party to a pale shadow of self.

Yet, the party has not seen a repeat of what happened decades ago. In some ways, it’s a failure of the Narendra Modi-Amit Shah duo compared to the Ram Manohar Lohia effect of 1967, the Jaiprakash Narain campaign of 1975 and PV Narasimha Rao-Sitaram Kesri’s own undoings that had seen the formation of the Congress (O) in 1969, the Congress (Reddy) and the Congress (Sharad Pawar) in 1978, the Congress (Tiwari) in 1995, the Madhya Pradesh Vikas Congress (led by Madhavrao Scindia) in 1996, the Karnataka Vikas Party (Sarekoppa Bangarappa) in 1996 and the Trinamool Congress in 1998.

No major group of Congressmen has broken ranks in spite of the humiliating and crushing defeats of 2014 and 2019.

Since August 15, 2020, the G23 had tried to keep the ante up, but on October 16, 2021, it saw a somewhat belligerent Sonia openly throwing a challenge, questioning the premise of its grievance that there was a sense of drift and lack of a hands-on party chief. Three members of the G23 — Ghulam Nabi Azad, Anand Sharma and Mukul Wasnik — were heard murmuring things that could not be dubbed as defiance.

Some leading lights within the G23 privately say that the group has been effectively dismantled, having ‘achieved’ a commitment for intra-party polls. It must, however, be said that the G23 was not unified from day one. Rather, it was an assortment of senior Congress leaders having different objectives in mind. While some succeeded in getting themselves nominated to party panels, others remain “happy to be unhappy”.

On a more positive note, both Rahul and Priyanka are showing signs of promise. Priyanka has been successful in getting some mind space in battleground Uttar Pradesh. Her offer to grant 40 per cent tickets to women candidates is interesting and innovative. There is lack of empirical research on gender-based voting patterns, but in recent years, Mamata Banerjee, Narendra Modi and Arvind Kejriwal have been successful in mobilising a greater percentage of women voters.

The big question is whether Priyanka Gandhi can show some spark of her grandmother Indira Gandhi. More importantly, would she muster the courage to contest the Uttar Pradesh Assembly polls? For the cynic, the 2022 UP polls may be already over for Priyanka and the Congress, but any foothold in terms of 25-odd seats or 10 per cent-plus vote share will hold promise. As the cliche goes, the road to Delhi goes via Lucknow.

Rahul, on the other hand, is focusing on issues of ideology. His move to induct Kanhaiya Kumar and Jignesh Mevani and the importance accorded to Hardik Patel are courageous as Rahul seems inclined to look beyond the Indian middle-class voters. The middle class may have been a great beneficiary of the Congress-led economic reforms, but currently, it is with the BJP. Rahul is keen to court and champion the cause of the poor, farmers, daily-wage earners and other marginalised sections of society. The left-of-centre tilt is there for everyone to see and those unwilling to buy his line of thinking are encouraged to head for the exit gates.

Long-time Congress watchers say the arithmetic is simple. There are over 200 Lok Sabha seats spread across Madhya Pradesh, Rajasthan, Chhattisgarh, Gujarat, Uttarakhand, Himachal Pradesh, Haryana, Goa, parts of Maharashtra, Odisha, Jammu, Punjab etc., where the Congress is in a direct contest with the BJP. At present, the BJP holds sway in almost 90 per cent of such seats. Unless the Congress manages to deal a blow and reduce the BJP tally to 50-60 per cent, the chances of its revival are slim.

Outside this cluster, the Congress is in a triangular or multi-cornered contest with the BJP on the one hand and non-NDA regional parties on the other. The alliance strategy has its limitations as bargaining for seats from a position of weakness is a non-starter in politics.

The Congress leadership's tussle with the regional satraps requires a separate volume. In a nutshell, Rahul and Priyanka are far less reverential towards the regional satraps, including the chief ministers of the party-ruled states or chief-ministerial aspirants in the poll-bound states.

Capt Amarinder Singh learnt this the hard way and is eager to settle scores at a time when age and political clout are not on his side. Navjot Singh Sidhu, by now, must have realised the kind of politics Rahul and Priyanka pursue while appearing to be different, yet effectively on the same page. Rajasthan CM Ashok Gehlot and his Chhattisgarh counterpart Bhupesh Baghel have been on tenterhooks. Even veteran Harish Rawat is beginning to realise that the road to the chief ministerial post is not going to be easy even if the Congress wins the hill state of Uttarakhand. As if the return of Yashpal Arya was not enough, that of bete noire Harak Singh Rawat and Saket Bahuguna is also on the cards.