Since the 1990s, our official strategy has been to encourage private sector investment in health, at the cost of public expenditure. Almost all of this has been concentrated in big cities, where hospitals have mushroomed. Along with private health, the medical insurance industry has boomed. The logic is that consumers as a community will pay for each other through annual premiums, instead of the government ensuring health for all. The Modi government too has bet big on it, rather than building h 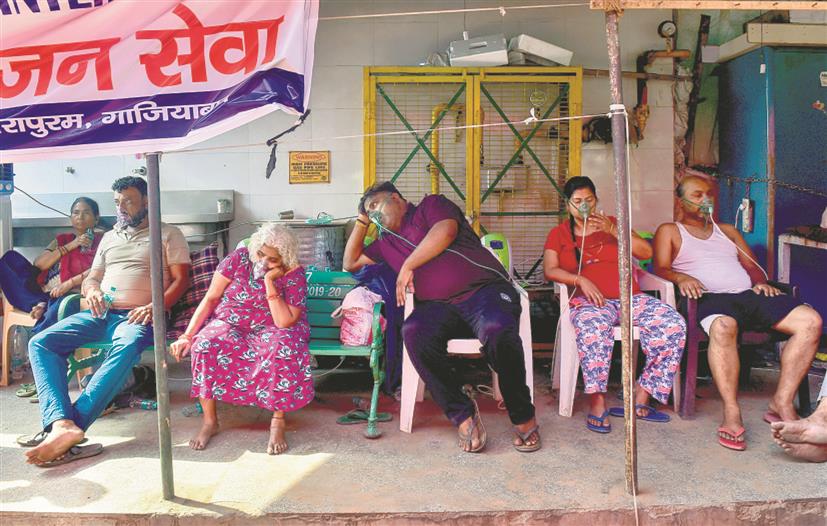 Wake-up call: The loan taken for medical treatment is one of the biggest causes of indebtedness in India. PTI

It is now over 13 months that my family and I have been sequestered at home. We get everything delivered and make all payments online. We wash and sanitise everything. Most importantly, we don't have any domestic help. Instead, we have a dishwasher, a clothes dryer and floor-cleaning robots that can be controlled through smartphone apps.

So, in over a year now, we have had virtually zero human contact. This has been possible because my wife and I can entirely work from home. It is also because we have significant savings to dip into in case of need. This financial security gave me the strength to reject job offers and decline invitations for paid lectures.

Not only is this luxury not available to 99 per cent of the Indians, even the top one per cent cannot afford to stay at home to avoid the coronavirus. If their workplaces open, they have to go to work. Others have to go out to run their factories, shops, restaurants and dealerships. The only people who can isolate themselves successfully are the super-rich. So, we hear of corporate honchos creating ‘bubbles’ with their families and staff. Others have moved to their holiday homes away from the cities. Still others have flown off in private jets to foreign shores.

The rest have to risk exposure even if they are reasonably well-to-do. And that is where all calculations have gone awry.

Till now, India’s affluent classes were confident that they have enough money and contacts to be able to get hospital beds if they got Covid. Our bet has been on private hospitals, with separate, well-equipped rooms, many nurses on each floor and specialists on call. We all have invested in large medical insurance packages because we know health costs money in India.

The real state of India’s public health system has never been of any concern to us. While the government’s low health spending has been a topic of discussion in cocktail parties, we have never really cared that thousands die every year from entirely treatable diseases. They die because they couldn’t get a doctor, afford medicines or reach a hospital bed.

A couple of numbers will help illustrate this. India has 1.2 million registered doctors for 1.38 billion people. That’s a ratio of one doctor for every 1,150 persons. This is very close to the ratio of one doctor per thousand recommended by the WHO. However, a majority of these doctors work in the private sector and are concentrated in cities and towns. When it comes to the poor, who need public health services, we have one doctor for every 12,500 people.

Studies have shown that 39 per cent of Indians do not get any medical attention before death. Most don’t have a medical practitioner close to their home and others don’t try because they cannot afford it.

When things get really bad, the poor take loans, leave their villages and camp outside city hospitals. Touts make money by helping them contact doctors and fill forms. It is common to see illiterate people standing near hospital pharmacies, asking others to help read prescriptions. Many of them are discharged from smaller private hospitals without being fully treated because they have run out of money.

In fact, the loan taken for medical treatment is one of the biggest causes of indebtedness in India. A 2019 study suggested that 55 million people slipped into poverty that year because of medical debt.

This is a systemic issue that has gone unaddressed by successive governments. Since the 1990s, our official strategy has been to encourage private sector investment in health, at the cost of public expenditure. Almost all of this has been concentrated in big cities, where hospitals have mushroomed.

Along with private health, the medical insurance industry has boomed. The logic is that consumers as a community will pay for each other through annual premiums, instead of the government ensuring health for all. In fact, the Modi government itself has bet big on insurance, rather than building health infrastructure through public spending.

There is no doubt that the urban upper-middle classes have much better access to health facilities today than they had 30 years ago. It is easier to get scans, MRIs and a multitude of other tests now. Complex procedures are done in many more hospitals today than earlier. In India’s premier hospitals, surgeons have access to top-of-the-line equipment and can offer cutting-edge life-saving implants to their patients. The installed capacities for such medical services are based on an estimate of how many affluent people will need it at any point of time.

But no one prepared for a virus that does not require expensive interventions. All top doctors agree that Covid requires just a few relatively cheap treatment options. The first is paracetamol to control fever. The second, and most important, is oxygen. The third is an inexpensive steroid called dexamethasone, which is given to those who are already on oxygen. The fourth is a blood-thinner, which is easily available in India. Finally, there is Remdesivir, in a minority of cases, to reduce the duration of hospitalisation.

Covid has shown us that what we need is publicly-funded inexpensive health for all. All we needed were mega ‘oxygen-bed’ hospitals and decently paid government doctors who could perform triage, to decide which patient needs how much care.

It is the absence of such health facilities that is the reason for this tragedy that is unfolding before us. No amount of medical insurance or high-end equipment can tackle this crisis. It is a wake-up call for India’s policy-influencing, discourse-deciding, affluent middle class.