All eyes on the police : The Tribune India

All eyes on the police

Be it NE clash, or Asthana’s appointment, it’ll be interesting how events unfold 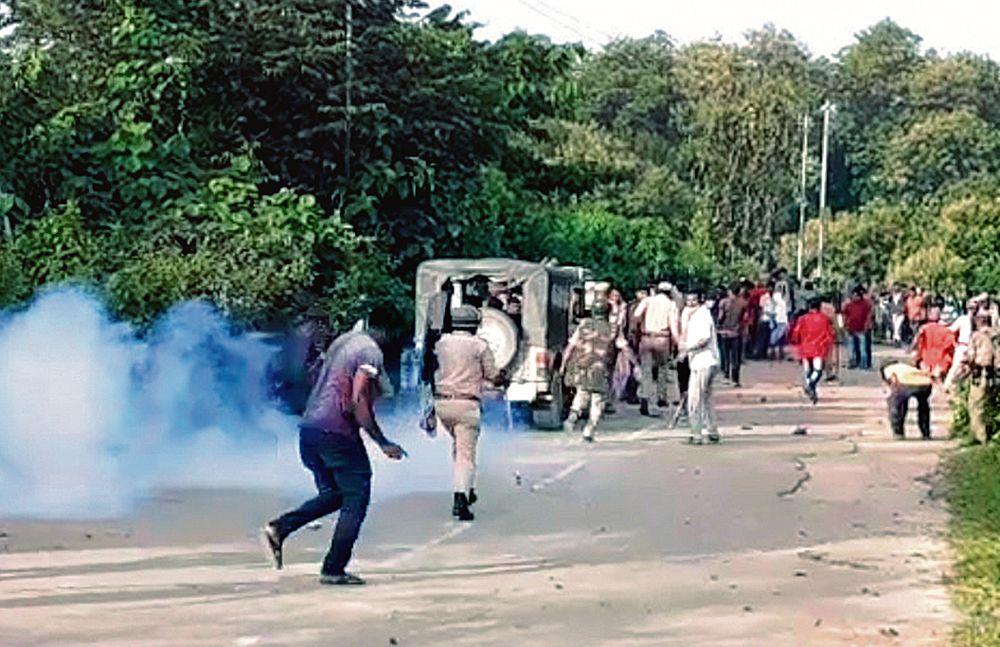 Unprecedented: Never before has the police of any state faced off with their brothers of a neighbouring state. PTI

We are living in interesting times, but they are becoming extraordinary, too. For the police which formerly were trained to meet the menace of stone pelters, there arises now the need to prepare to skirmish with the police of neighbouring states!

I remember no earlier instance of policemen of border states training their guns on each other. And suddenly the Mizoram Police snuffed out the lives of six cops of Assam with their machine guns, as per the claim of the Assam Chief Minister.

Never before has the police of any state faced off with their brothers of a neighbouring state. As a Sub Divisional Police Officer of Gadhinglaj in Kolhapur district of Maharashtra, I had to travel by road to visit areas in my jurisdiction through Nipani in Belgaum district, now a part of Karnataka. The current SDPO of Gadhinglaj, I presume, is doing what I needed to do in 1955, in which case he may now need an armed escort if an Assam-Mizoram state of combat is permitted to develop on the Maharashtra-Karnataka border.

During my stint with the CRPF, I visited Mizoram twice. The road to Aizawl from the small airport of Silchar wound through Vairengte, a town now in the news. It was an arduous journey, but at no stage did we have to prepare for an attack by the Mizo police! The firefight that took place recently has the trappings of a festering sore, but when the sore began to fester I do not know.

What has been told to us is that the Union Home Minister had called a meeting of the Chief Ministers of the ‘Seven Sisters’ of the Northeast, and warned them to settle all their differences amicably. Three days later, the Assam Police in the border district of Cachar, and the Mizoram Police from the border district of Vairengte faced off with guns blazing over a long-standing dispute over a piece of land that each state claimed as its own.

I would imagine that Amit Shah would have been shocked and even furious at the gall of a BJP-ruled state and another ruled by a BJP ally shooting bullets at each other, like Indian and Pakistani troops or the BSF and Pak Rangers sometimes do across the LoC on our western borders. If the country’s Home Minister thought that a stern warning from him was sufficient to settle such disputes, he miscalculated. Possibly, if the government in place in Mizoram was not a political ally of his own party he might have found it easier to bully it into subservience.

Armed skirmishes at international borders are a common occurrence, but not within a country’s own borders. In the US, the Democrats wield power in some of the 50-odd states and the Republicans in the rest. I have not heard of armed conflicts between two neighbouring states, even if ruled by two opposing dispensations.

Hindutva’s goal of a uniform culture in the entire country seems to be facing insurmountable hurdles, with the Assamese and the Mizos involved in a mini-warlike situation. Such a situation had not cropped up even when the Congress or other regimes ruled in Delhi.

This border dispute between two states cannot be foisted on the shoulders of the Modi-Shah administration, but the controversy about the appointment of Rakesh Asthana as Delhi Police Commissioner could have been avoided. The government should have picked an officer from the AGMUT cadre, according to well-established rules of governance. Bringing in an outsider from Gujarat, in what can be considered normal times, is very demoralising to the Delhi Police. Many serving and retired officers I know continue to debate the reasons for this self-inflicted wound.

There is agreement only on one point. Modi and Shah felt obliged to pamper Asthana. They have to show him that they are grateful lest others fail to oblige in future. When I initially turned down the offer of ambassadorship at the end of my journey in Punjab in 1989, the PM’s Principal Secretary, BG Deshmukh, invited me to his home, primarily to convince me to accept. My wife was also invited. Deshmukh’s wife and mine had been classmates in Pune, and so she, too, assisted in the task of persuasion. In fact, my wife required much more persuasion than me. She was not interested in a foreign assignment, away from her daughters.

The argument Deshmukh advanced was that it would become difficult for the PM to get suitable officers to tackle difficult assignments if my colleagues felt that politicians just used officers and later dumped them when they are no longer required.

The important issue is the use the leadership intends to make of this officer of the Gujarat cadre, which no other officer of the AGMUT cadre could have tackled. And here the speculations differ. There is nothing he can do now about the investigations in the NE Delhi riots. The cases are in court and will be decided by those tasked to dispense justice.

The farmers’ agitation lumbers on. But what exactly does the government have in mind? The time to convince the farmers has long since passed. They have dug in their heels. It would be suicidal to use the big stick. The farmers in any country are a special breed. They cannot be treated like critics or activists are often treated. How then can a police chief help?

If he resorts to some form of state terror it will be self-destructive. And he has been recognised for his skills in investigation of crime and not for controlling peaceful protesters who turn violent.

An interesting possibility advanced was that he would be asked to neutralise AAP and its leaders. That is not a job for the police, but if that is going to be his secret mandate we are in for even more exciting times. It will require Machiavellian twists to all the laws on the statute books. But such twisting may end in the tails of the twisters being twisted.