All not lost in Afghanistan

Central Asian countries are standing by the government 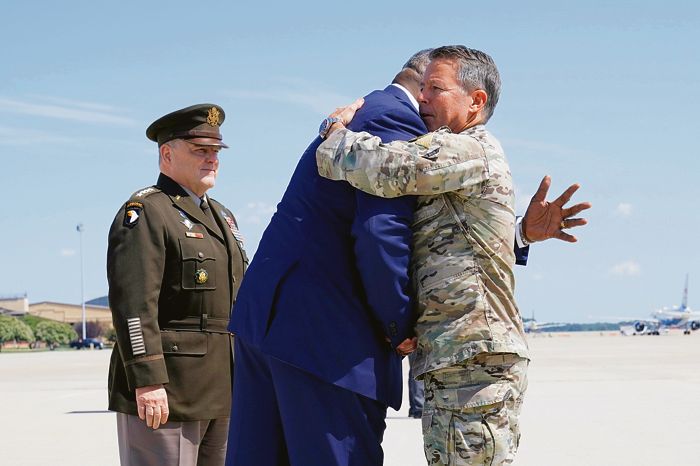 Together: It’s vital for everyone to keep their nerve and take on the challenge. Reuters

The US walked away from Afghanistan in the dead of the night. That was an understandable manoeuvre to prevent any Taliban grandstanding attack on them. Instead of the dramatic photos of the evacuation of the Saigon embassy, all we have as a visual is a frame of the detritus of the American civilisation left behind in Bagram, their biggest base.

The developments in Afghanistan pose an agonising challenge for India. Since 2001, it has operated in the country, mainly in executing development programmes under the US/NATO security umbrella. Now the latter have walked away, and we along with many others are scrambling for a strategy.

India would be advised to measure its steps carefully. Minus security, it cannot, obviously, operate the way it did for so long in Afghanistan. India hardly has the capacity to take up the US burden. Indeed, there could be a good argument for simply walking away from the whole mess. It would be a cold-hearted decision, but the situation there is not of our making, and we have been tertiary players anyway.

For more than a decade after defeating the Taliban, the US discouraged any Indian military involvement in Afghanistan, deferring to the primacy of Pakistan in its calculations. By the time the US got around to accepting the need for Indian military assistance, the situation had deteriorated significantly.

The Afghan National Security Force (ANSF) was constituted in the early 2000s and in the first decade, the US and the International Security Assistance Force (ISAF) was careful in limiting its size and capabilities so as not to offend Pakistan. Unlike regular militaries, they were deliberately kept deficient in artillery and air power. They were viewed as a support element whose primary task was counter-insurgency.

Since 2012, when President Obama spent just six hours on a visit to Kabul, it has been clear that the US would leave Afghanistan. Even though it signed a strategic partnership agreement with Kabul at the time, it did not quite spell out what that meant in terms of financial and military commitments.

In 2013, President Karzai turned to India to provide artillery and military transport aircraft, but New Delhi, too, balked, not wishing to annoy Pakistan. As per a strategic partnership agreement signed in 2011, India had promised to assist in the training, equipping and capacity building of the ANSF, but hesitated in supplying the equipment. In 2015, India did begin a programme that led to the Afghan Air Force getting eight Mi-35 attack helicopters.

In the past decade, however, the US and the ISAF put in a systematic effort to build up the ANSF. But their goal was to train a force with counter-insurgency capability, and not the capacity to militarily disrupt or block the Taliban supply chain leading to Pakistan.

Since 2014, the US began providing some artillery, helicopters and armoured vehicles, but the ANSF’s biggest weakness is in the air force. The US has limited their close air support capacity to some 20 A-29 Super Tucanos and 10 AC-208 Cessna. These are light fighters and can be lethal for the Taliban, without worrying Pakistan. However, there are simply not enough of them. The bigger problem the ANSF faces is in maintaining this equipment.

There is little point in crying over spilt milk. The US and ISAF could have done better, and so could India. All is not lost. If the ANSF is crumbling in parts, the Taliban, too, are not the kind of force that fought in the 1990s. The surge of attacks we are seeing are essentially psychological warfare, aimed at paralysing the ANSF and the government in Kabul. It is important for everyone to keep their nerve and take on the challenge.

It would be foolhardy to underestimate the Taliban. But the ANSF are numerically superior to the Taliban, and perhaps through trial and error, they will find their own set of strategy and tactics and let go of those taught to them by the Americans and the NATO. What they need is unambiguous support.

As of now, the US has promised to provide $3 billion to support the ANSF, which is about 75 per cent of its requirement. The Europeans, too, need to spell out their commitment. Countries like India can play an important supporting role in assisting the Afghans in ensuring the serviceability of their equipment and training their personnel.

Geopolitically, too, things are not bleak. All the Central Asian countries are standing by the Afghan government. The Chinese, too, have cautiously expressed their support for Kabul. Turkey has said it is willing to have its forces defend the Kabul airport.

Perhaps the most important player here can be Iran which shares a large border with Afghanistan, and through whose Chabahar port, India can access the country. The recent visit of External Affairs Minister S Jaishankar to Tehran is not without significance here.

A Taliban Afghanistan is not a threat to Kashmir. Afghan jihadis have been there earlier and failed. India needs a strong, stable and independent Afghanistan to prevent Islamabad from being tempted to use the country as its ‘strategic depth’ area.

Contrary to the popular adage, history does not usually repeat itself. There is no certainty that the Taliban will prevail in Afghanistan. If the US and NATO countries step up with financial assistance, which they can easily provide, effective regional diplomacy and Afghan determination can lead to another, more positive outcome for the unfortunate country.