An epochal transition : The Tribune India 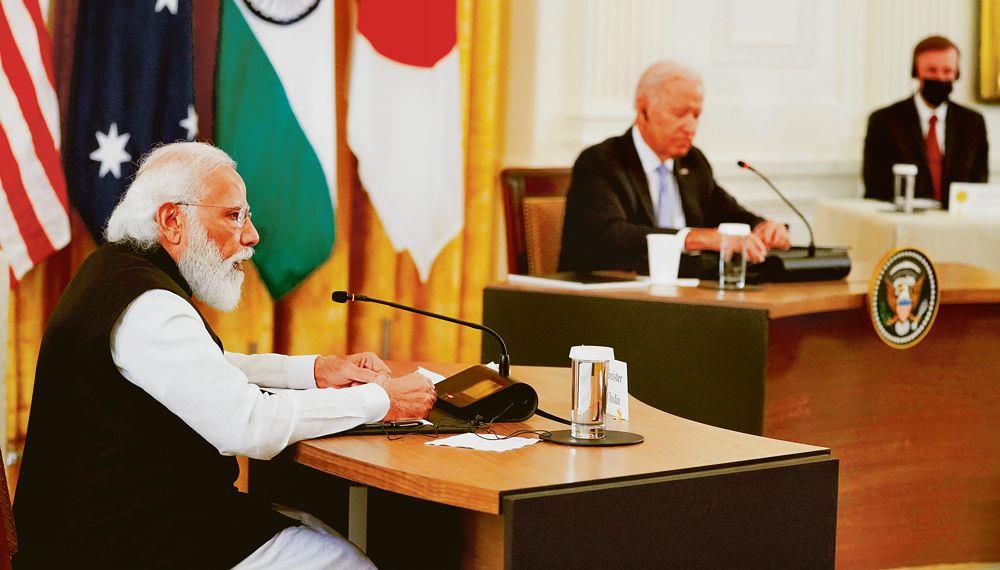 Scales tilt: The power dynamic is shifting from the West to Asia. AP

Cervantes’ epic hero Don Quixote said before dying, ‘Never look for this year’s birds in last year’s nests.’ India should not miss another opportunity in its foreign policy — for the third time in 75 years since Independence.

The choice is between a subaltern role for perpetuation of US hegemony, or a more just world order where nations can pursue their own paths of development as equals.

The first occasion was the then Chinese Premier Zhou Enlai’s 1960 visit to Delhi, bearing a workable solution on the border dispute in the nature of a package deal for final settlement — China would accept India’s control over today’s Arunachal Pradesh, which meant its de facto recognition of India’s jurisdiction up to the McMahon Line, if India accepted China’s control over Aksai Chin. India rejected the Chinese proposal (which may look so alluring today).

The second occasion came during the tenure of the Narasimha Rao government when the Cold War era had ended and a reset of Indian compass became necessary. The 1990s was a decade when India could still claim parity with China. But even as Russia under Boris Yeltsin seized the opportunity to reach a border settlement with China and begin a new chapter freed of cobwebs of history, the plodders in New Delhi establishment walked slowly.

Delhi laboured under a flawed, illogical belief that ‘post-Soviet’ Russia was condemned to remain a spent force. Ironically, while the US spin masters brainwashed the Indians, Washington was finessing its own stratagem for NATO’s eastward enlargement in anticipation of a need that may arise to contain a resurgent Russia on global stage!

The result was a patchy transition riveted on the flawed estimation that the world was entering the New American Century. India’s ‘unipolar predicament’ eroded its strategic autonomy and stymied its foreign policy, and spawned notions that the US would make it a world power, as ‘counterweight’ to China. India is in no longer delusional that the US is our saviour.

PM Modi’s doctrine of atmanirbharta testifies to it.

The current transition, as India turns 75, is far more profound. India today is more than a bystander. And the transition is much more than about China’s rise or Russian resurgence. Unlike the US, which is paranoid that China may soon become the world’s number one economy and Russia’s strategic capabilities once again pose challenges, India’s focus should be on sustaining its development and transforming as a middle-income country.

The transition is about the world order in the 21st century. The US has fallen from the pedestal of being the ‘lone superpower’. The belligerent US interventions in Yugoslavia, Afghanistan, Iraq, Syria and Libya, which littered the commons with death and destruction and refugees, cannot be repeated. Yet, the US refuses to reconcile with this reality. That is the leitmotif of the Ukraine conflict — bringing NATO to Russia’s doorstep on its journey toward Indo-Pacific. The US behaves like a revisionist power — weaponising the dollar and confiscating other countries’ reserves. The cornerstones of the international system are arbitrarily removed.

The non-western world understands this. President Biden’s initiative in Jeddah to form a military alliance with the US’ closest West Asian allies to roll back Russian and Chinese influence not only had no takers but Egypt, Syria, Saudi Arabia, the UAE and Qatar have, instead, sought membership of the Shanghai Cooperation Organisation, a regional security platform that Beijing and Moscow created! (SCO has already approved Iran’s accession.) Again, Saudi Arabia spurned Biden’s entreaties to abandon its OPEC+ alliance with Russia on oil production.

The US’ narrative about ‘values’ of democracy, human rights and rule of law lack credibility in the non-western world where 86% of world’s population lives. Biden drew ridicule upon himself by once condemning Saudi Arabia as a ‘pariah’ state, only to embrace it 18 months later. US sponsorship of colour revolutions — latest being Sri Lanka — adds to the sense of insecurity of the global South, which has lost faith in the fairness of the US-led international system.

India should have strategic focus — choice is between a subaltern role for perpetuation of America’s global hegemony and western dominance in the international system, or a more just world order where countries can pursue own paths of development as equals with mutual respect. It is nonsense that without the US conducting itself as the world policeman, ‘anarchy’ will set in. Almost all hotspots in the post-Cold War period are traceable directly or indirectly to US recklessness.

Fundamentally, this transition is about the global power dynamic shifting from the West to Asia. Clearly, five centuries of western domination are coming to an end. This historic shift has huge economic implications. The West’s prosperity historically depended on the seamless transfer of wealth from the rest of the world. The colonial era has ended but neo-colonialism survives. One unspoken grouse against China and Russia is that they have made deep ingress into the African continent, be it Sahel region or Sudan and Ethiopia. This is a losing game for the West, as African countries are gaining space to negotiate on equal terms for the first time in history with predatory western powers whose strategy of ‘divide and rule’ is no longer working.

The imperialistic overtone makes the struggle over the world order and the functioning of the international system an epochal one. The US made it clear last week that for advancing its interests, it neither rules out its first use of nuclear weapons in all cases nor will it specify the circumstances under which it would use them.