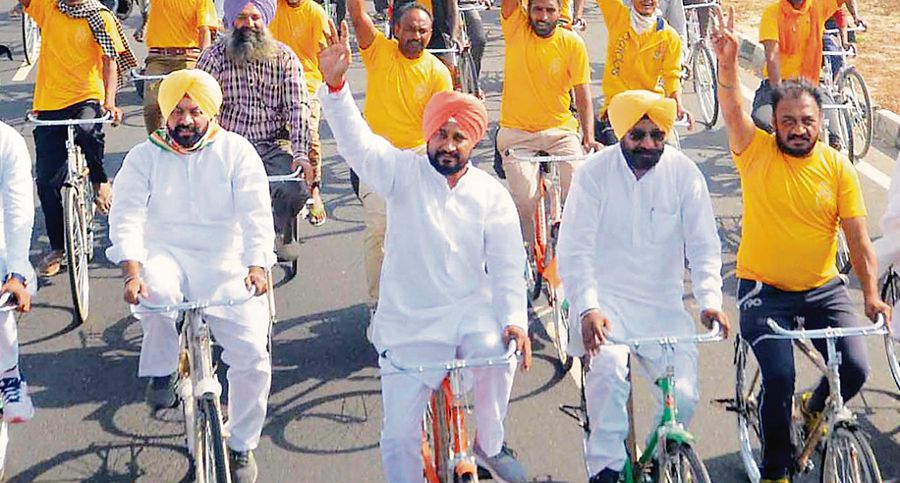 Lead the way: It is in the new CM’s hands to prove right political presumptions with an element of Gandhian idealism. PTI

When caste identities become barbed wire fences that separate, hurt and bleed neighbours, there comes a point in time when it is intolerably urgent to transgress community markers and remove the concertina wires that have been hurting the body politic. It was one such moment in our contemporary history when Charanjit Singh Channi was picked by the Congress central leadership to replace Captain Amarinder Singh, making Channi the first CM of Punjab from the lowest stratum of society (I am consciously avoiding the term Dalit as the Punjab State Commission for the Scheduled Castes has barred the use of this expression).

Punjab was always an extremely important part of British India and Punjabi soldiers, including those from the oppressed castes, had served the empire loyally. But when it came to recompensing the disadvantaged sections, the British denied the oppressed castes entry into the higher echelons of power — all they did was to try and create fissures within the freedom movement without empowering this huge section of the population. So the first Scheduled Caste (SC) CM of Punjab obviously is symbolic of a shift in Indian politics towards genuine representation and a long-awaited process of assimilation.

The seeds of identity politics were sown by colonial administrators when they promoted the idea of separate electorates to create separate nationalities within the Indian society based on religion and caste. The British succeeded in helping Mohammad Ali Jinnah practise his two-nation theory, tearing apart the nation and leaving millions dead and homeless, with Punjab bearing the brunt; but in the 75th year of the Partition, the Gandhian idea of reconciliation and empowerment is getting a fillip with a mainstream political party, overcoming social prejudices, recognising the merit of real representation and offering the Chief Ministership to a person from the state’s single largest community.

The political identity of the SCs, as created and nurtured by Dr BR Ambedkar, no doubt has helped to empower the community and to assert itself electorally. The distinctive characteristics of oppression — primarily untouchability — easily lent Gandhi and Ambedkar to mobilise the SCs in two different and competing political streams: one anti-colonial and the other pro-colonial. Ambedkar's political project took off long after his time with Kanshi Ram’s All India Backward and Minority Communities Employees Federation, which later got converted into the BSP. Kanshi Ram’s work in organising and crystallising the SCs into one political unit is still awe-inspiring. Though a Punjabi, he rightly chose UP — with the largest number of SCs — as his prime laboratory for its caste arithmetic possibilities. And his experiment paid off when he made Mayawati the first SC Chief Minister of UP and the country’s first woman SC Chief Minister in 1995.

But the BSP did not do it all alone. It had to seek the support of the BJP after breaking off with alliance partner Samajwadi Party. When Mayawati did come to power on her own, she had coined a slogan of bhaichara or brotherhood with the Brahmins of UP, proving that even in a state where a community is numerically significant it cannot capture power by itself. The social alliance of the SCs and the Brahmins worked in Mayawati’s favour in 2007 and she is again trying to woo the Brahmins by offering bhaichara. The political slogan of bhaichara is actually the admission of the limits of identity politics where no one caste can capture power by putting up barbed wire fences of hatred.

Parties and their leaders professing identity politics, after acquiring the critical mass of their own caste votes, would still need social alliances with other communities to become electorally effective. For, in any given constituency even the electorally dominant group can be defeated by all the other communities coming together. There are, of course, rare exceptions, but when all the other groups gang up against the ‘majority’ caste, it gets reduced to a minority. Interestingly, the BSP’s original idea was to have a social alliance between the SCs and the Muslims and UP was the most fertile ground for such an alliance as it offered the oppressed minorities an opportunity to defeat their oppressors. However, Mayawati’s political acrobatics, which included campaigning for the BJP after the Gujarat riots, ensured that the unbeatable SC-Muslim combination did not always materialise, forcing her to opportunistically seek Brahmin patronage.

Theoretically, BSP’s Brahmin bhaichara politics ought to signal the death of the Ambedkarite identity project, but that is how caste politics works on the ground — looking at the voters not as individuals but as religious and caste blocks. It is in this context of cynical electoral opportunism that the Congress has played its own SC card, no doubt for similar reasons. But the very fact that a multi-caste, multi-religious political entity decided to promote an SC in a state dominated by the upper caste farming community of Jat Sikhs shows the possibility of the politics of assimilation beyond the limits of identity. Channi, for instance, ought to be a leader who appeals to multiple overlapping SC and Sikh identities, bringing in a sort of reconciliation between different blocks.

This assimilative politics has the potential to herald a new era of emancipation and empowerment for the marginalised groups without keeping neighbours cooped up in caste containers. The Gandhian idealism which was wrongly interpreted as condescension — the term harijan was born out of a genuine sense of atonement — professes the empowerment of the marginalised as a collective goal. Thus, Channi’s elevation should be celebrated in the spirit of the assimilative politics of equality and proportionate representation, and not merely as tokenism or plastic election-time bhaichara. It is now in Channi’s hands to prove right these political presumptions with an element of Gandhian idealism.

If he fails, it would just be the failure of political tokenism, but if he succeeds it would be the success of a political project to annihilate castes and community identities, and to create meritorious victors from among the most oppressed.