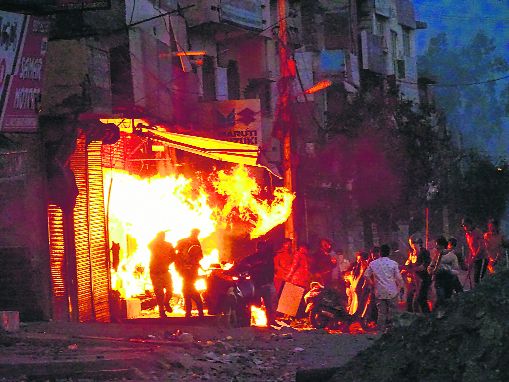 Partial: Delhi’s Special Commissioner of Police (Crime) wrote to cops heading the probe that the arrest of some Hindu youths had caused ‘resentment’.

The Delhi violence of February and the events that followed make for a looking glass to view the profound changes that have shaped the Indian polity after 2014. A day before Parliament met, the Opposition — disarranged by a Congress shaken by internal convulsions, the apathy of the otherwise vibrant regional parties and an enfeebled Left — woke up and declared it would protest the Delhi Police’s move to implicate the BJP’s ideological adversaries for their alleged role in instigating the communal bloodshed that claimed over 50 lives, largely those of Muslims.

Among the arraigned were Sitaram Yechury, the CPI(M)’s general secretary, Swaraj Abhiyan founder Yogendra Yadav, economist Jayati Ghosh, Delhi University professor Apoorvanand and filmmaker Rahul Roy. The depth of their involvement is uncertain, although if the ‘official’ version is to be believed, they were part of a ‘larger conspiracy’ to stoke the violence that coincided with President Trump’s visit. The American press naturally questioned the Indian State’s commitment to upholding religious amity.

Although the police later ‘clarified’ that Yechury and the others were ‘only mentioned’ in the disclosure statements made by those arrested, it was apparent that they were on its radar at a juncture where the investigations could conclude. These individuals articulated their opposition against the CAA-NRC-NPR. The dissent erupted in a spate of largely non-violent confrontations between the agitators and the police the country over until the Centre and the UP Government turned the screws and gave the police carte blanche to act.

The character of the anti-CAA agitation was different from the well-coordinated ‘crusade’ against corruption initiated by the India Against Corruption (IAC) outfit during UPA’s second stint. The IAC was backed by the RSS. The anti-CAA protests lacked institutional, political endorsement because like every other issue dominating the political discourse post 2014, the citizenship package was polarising. Those who spoke against the CAA were Muslims and a class labelled as ‘liberal’ and ‘secular’. Both were outnumbered by pro-CAA votaries. Even the Congress toned down its responses, knowing that the repercussions of leaning on the anti-CAA side could be electorally damaging.

When Delhi flared up, the police minimised its role to begin with and allowed the clashes to pan out between the pro- and-anti CAA groups into fierce, but unevenly fought street fights. The police’s prejudices were indubitably chronicled. Anurag Thakur, a BJP minister, and Parvesh Verma, West Delhi MP, and Kapil Mishra, a former AAP legislator, were filmed, exhorting the crowds to take up arms against anti-CAA demonstrators. No action has been taken against them. On the other hand, Delhi’s Special Commissioner of Police (Crime) wrote to police officers heading the probe that the arrest of ‘some Hindu youths’ in riot-hit areas had caused ‘a degree of resentment among the Hindu community’.

A dog whistle? No, the establishment’s message did not stay coded or subliminal for long. It was a directive to throw the book at one community and excuse the other. The ‘azadi’ chant, a spillover from the 2015 JNU sit-ins against the BJP’s project to alter academia’s ideological and political thrust, became the anti-CAA slogan. ‘Azadi’ was akin to waging a war against the state although various protests against the CAA adopted the Tricolour, the Constitution and Gandhi and Ambedkar as totems.

When Parliament convened on September 14, there was not a murmur from the Opposition on the Delhi probe. By then, Umar Khalid, a former JNU student activist who, along with Kanhaiya Kumar and Anirban Bhattacharya, was charged with sedition for commemorating the second anniversary of the hanging of Afzal Guru, convicted in the attack on Parliament, was arrested under the Unlawful Activities (Prevention) Act or UAPA. Khalid was the eighth student arrested since last February.

Outside of the House, the reactions were muted. While one Congress leader said invoking the UAPA to quell protests would have a ‘chilling effect’ on democratic rights, another legal luminary asked for a fair application of the law. There were no takers for the Left’s notice, demanding the suspension of business to discuss the Delhi violence investigations.

It appears that the battle to ensure a modicum of justice in the inquiry will be fought outside the political arena by a dwindling segment of civil society. Dwindling because some of those who had identified themselves with the rights at stake distanced themselves. Not long ago, Kanhaiya Kumar and protests were synonymous. He fought the 2019 elections from Begusarai and lost to BJP’s Giriraj Singh. On September 16, Kanhaiya, who is with the CPI, was slated to address a press conference with five other activists, academics and lawyers, who included Prashant Bhushan and Syeda Hameed, a former Planning Commission member, in Delhi, on the police’s ‘fact-finding’. He had reportedly agreed the day before but did not show up. A former Kanhaiya associate called his absence ‘heartbreaking’ and wondered if it had to do with his electoral ambitions. Kanhaiya, who seems keen to live down the image of an ‘urban Naxal’, has not said a word on Umar’s detention. He has Begusarai’s Hindu votes to think about.

Hark back to 1984 and Rajiv Gandhi’s assertion that ‘when a mighty tree falls, the earth around it is bound to shake’ resonates. Over 2,000 Sikhs were killed in the backlash that followed Indira’s assassination. Thirty-six years and 11 commissions on, the families of most victims await reparation. It seems unlikely that the current circumstances would allow a judicial commission. The government wouldn’t want to remember that from 1970, the judicial agencies that looked into communal clashes, from Bhiwandi to Tellicherry, Delhi and Mumbai have documented the police’s prejudice towards the minority communities. That will touch a raw nerve.