Augmenting air defence in Ladakh with Navy : The Tribune India

Let us not forget that there are chances of any conflagration escalating to the maritime domain around our sea domain and the Malacca Straits, where the carrier-borne MiG-29s would find better employability. In fact, the Vikramaditya could see a potent deployment in coordination with our assets in the waters around Andaman and Nicobar. 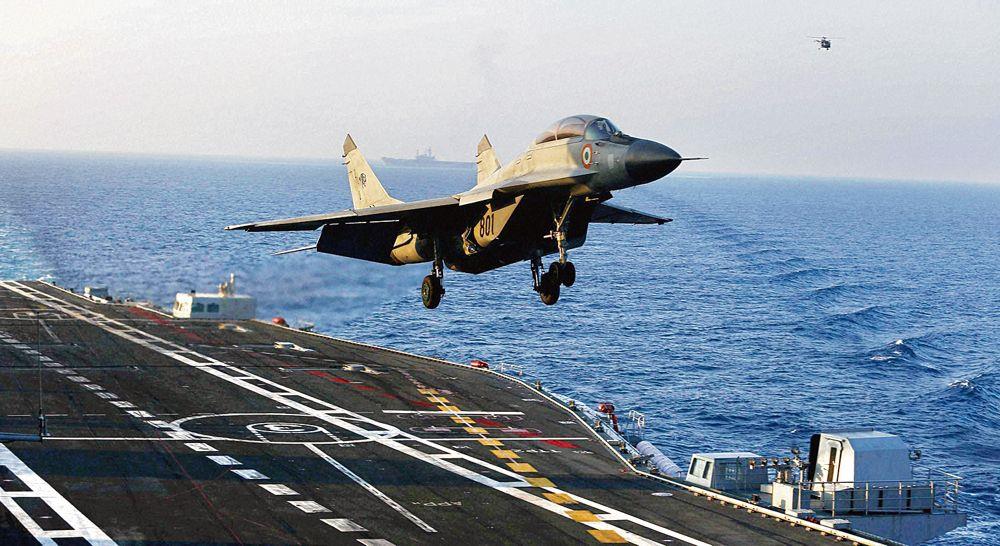 For the tri-services, fighting a war is essentially about integrating the assets of one service gainfully into the operations of another to further the overall war aims. Historically, smart-thinking commanders in the IAF have not shied away from exploiting the capabilities existing in the Army and Navy to augment their own air campaigns and plans. The integration of the Navy, and the civil and Army radars into the IAF’s air defence order of battle (ORBAT) has been one such example in the past.

Naval maritime commandos (MARCOS) or the Army special forces could thus find employability within the IAF’s counter-air, counter-terror or suppression of enemy air defence (SEAD) campaigns. The induction of the Indian Navy’s Poseidon P8-I in Ladakh is, therefore, something to be lauded. Its inverted synthetic aperture radar capabilities (high resolution of the order of one metre) would definitely enable a joint surveillance target attack radar system (JSTARS) kind of exploitation of the P-8, as was apparently achieved during the Doklam standoff.

But the decision to deploy the MiG-29Ks in the sector, if media reports are to be believed, is perplexing indeed. Now, the integration of assets does not mean throwing everything you have at the enemy, even if operational viability is suspect. The MiG-29K is essentially meant for carrier-borne air defence or limited maritime and ground attack roles.

But to use it to augment air defence and strike capabilities in totally unfamiliar terrain and air bases is another matter altogether. Naval pilots are not trained for valley-flying or ground-attack missions in high-altitude regions, unlike their IAF counterparts. Technical challenges such as engine start at high-altitude bases are another matter to contend with, which the IAF has mastered over time and the Indian Navy has no experience with. In any case, what is the real operational urgency for such a deployment, one wonders.

And let us not forget that there are chances of any conflagration escalating to the maritime domain around our sea domain and the Malacca Straits, where the carrier-borne MiG-29s would find better employability. In fact, the Vikramaditya could see a much more potent deployment in coordination with our assets in Andaman and Nicobar to dominate the sea lines of communication (SLOC) in the Indian Ocean.

In any event, at present, only posturing is being indulged in by both the parties. Should there be a reason to fire a shot in anger, what type of air operations could be envisaged?

Possibly, counter-surface force operations along the high valleys against Chinese troop deployments or formation headquarters, some SEAD missions against the air defence radars or missile batteries or some strategic strikes against the logistic and communication hubs? All such missions could well be handled by the Sukhois, Mirages and Jaguars. Strike options in the mountainous terrain could also be exercised through our Hawk and Pilatus trainers, AH-64 Apaches or MI-17V.

The biggest worry, of course, would be the ground-based missile threat to our strike aircraft. So also for the P-8 I which could mainly be employed in a border surveillance role, as any deep ingress beyond the LAC could open up the threat spectrum of the Chinese S-300 HQ-9 class. In such a scenario, where does the IN-MiG-29K fit in? Surely, we have enough SU-30 MKIs, MiG-29UPGs and Mirages to take care of the air defence of the vital areas and vital points in this sector?

Also, there could be issues with aerial refuelling for the P-8 and MiG-29Ks which I understand are not compatible with the IAF tanker probe and drogue systems. If the intent is only to psyche the adversary by showing the number of aircraft deployed, that would be counter-productive as the aim should be to achieve combat-efficiency for all fleets deployed and not show doubtful capability. The doubtful aircraft availability of the MiG-29 K — around 52 per cent — as brought out by the CAG, would be another operational milestone for this fleet.

Another media hype has been about the yet-to-arrive Rafale. The highly successful air raid earlier this month by the Egyptian or French Rafale over the Al Watiya Turkish airbase in Tripoli could not have been timed better. Besides, with the limited number of Rafale expected in the country this month, we are talking of may be half a dozen or so available over the next three months.

So, against the current China border standoff, the induction of the Rafale would be a bonus if at all they could be operationalised in time. Once again, we have capabilities in place to prosecute an air war effectively with our existing assets.

The aim now should be to optimise air defence in the Ladakh region, integrate assets such as radars, AWACS and SAGW and give the operators confidence in round-the-clock operations. The emphasis should be on accurate delivery of weapons over tricky targets in the mountains, peculiarities in terrain-masking and its impact on sensor ranges, air defence etc.

It needs recalling that Kargil was a one-sided air battle and yet it took us long to get used to the altered operating domain. Now, if there is going to be another capable Air Force attempting to play spoilsport for you, the challenges are clear. So, my advice to our air warriors would be to keep it simple: hone your marksmanship and outwit the opposition through superior flying and associated aerial tactics.

Given the relative distances of the tactical battle area from the launch bases being in our favour, the enemy is going to be operating at the extremities of his ranges, looking for quick tactical solutions in weapon delivery and air combat.

Let us not be on the defensive, therefore, and put our superior training and proven weapon platforms to good use.

He however managed to dodge his chasers as he briskly ran of...