There is now an unmistakable ploy adopted by leaders of democratically elected governments to get the agenda through by the sheer force of majority. It is becoming increasingly difficult to differentiate between the brutal suppression by China of the student-led Umbrella Movement of Hong Kong and the recent excesses against certain universities in India. 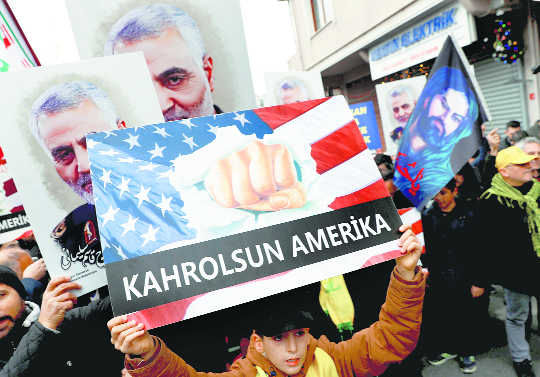 Blatant: Muscular use of military assets to project a tough image.

The US airstrikes that eliminated the Iranian Revolutionary Guard Corps (IRGC) commander, Gen Qassem Soleimani, as his convoy emerged from the Baghdad airport has rocked the world by the dramatic upping of the ante. Much like India’s airstrike in Balakot after the Pulwama terror attack, the US action against Soleimani was a strong message that the country and its leadership were prepared to take action against what were earlier considered ‘untouchable entities’. In fairness, it must be brought out that the escalation was exacerbated by Iran’s storming of the US embassy in Baghdad, which itself was a result of spiralling events towards the last days of 2019.

There are visible similarities between the US and Indian governments in the blatant and muscular use of the military assets to project a nationalistic and tough image. This is even so more pronounced as both have used the military in election circumstances to garner political gains from kinetic and spectacular displays of military capabilities.

The creation of the IRGC during the rise of the present supreme leader of Iran, Ayatollah Ali Khamenei, is a saga of how a parallel centre of power was created by the formation and consolidation of the IRGC under Soleimani. Soleimani’s rise, by his effective conduct of operations of the Quds force and his flamboyance, stemmed from the unstinted support he had of the supreme leader.

The US President is facing impeachment proceedings led by the Democrats and though the trial stage is to begin, there is a large White-dominated section of the US population that staunchly supports President Donald Trump as it firmly believes in his slogan of ‘Making America great again’. Such supporters’ dominant belief that the Whites have been underdone in their own country is what swept him to power and now gives him confidence against being tried.

As President Trump prepares and the US military braces for an expected retaliation-cum-escalation across the spectrum, the opposition Democrats are in the process of firming up a motion to vote to limit Trump’s war-making powers, thereby restricting free and unilateral actions to deal with the looming crisis. This resonates with the collective questioning by the Opposition in India when it challenged the motives and the results of the Balakot airstrikes. In both cases, two facets emerge: the leadership is being put under pressure by what is perceived to be an opportunistic political opposition; but where the population in general is enthused by the nationalistic pitch that such military actions evoke and stoke patriotic passions.

Be it the CAA-NRC imbroglio, abrogation of Article 370 in J&K or the belligerent nationalistic stance in the elections by the NDA government, the emphasis is on a religious agenda. There is an unmistakable familiarity that links the authoritarian streak in both countries.

In the use of the law and order machinery, there are dangerous parallels that are unfolding too. The passive role, amounting to complacency, of the police force in the recent events at JNU is as culpable as the role displayed by the same police force during the anti-Sikh riots in Delhi and other places in 1984. The control of the police was in both instances — then and now — with the Central government and indicative of the use of force to suppress dissent by the party in power.

The use of the military for political advantage and of goons to suppress dissenting groups is becoming almost synonymous. Both are serving no national interest if they are wielded to garner electoral and other petty agendas. The fact that it’s happening all over the world is no justification or stamp of legitimacy.

These are dangerous portents and indicative of an unmistakable ploy adopted by leaders of democratically elected governments to get the agenda through by the sheer brute force of majority. It is becoming increasingly difficult to differentiate between the brutal suppression by China of the student-led Umbrella Movement of Hong Kong and the recent excesses against certain universities in India. These trends of various hues, like the arrogance of majority, religious intolerance, politics of nationalism and hyper-nationalism are being witnessed with unfailing regularity in different corners of the country and are disconcerting to the average citizen.

The role of Facebook-Cambridge Analytica (a political consulting firm that used data mining towards opinion modification) during the US presidential elections which is alleged to have used the data of voters to selectively target them to influence their voting is revealing as to the technological capabilities that exist today and the extent that political parties can manipulate voters and public opinion. The Indian news and social media space is similarly flooded by technologically supported opinion-forming and planted news stories to sway or distract the population from issues. The mantra to govern seems to be that the best public is an uninformed public or, better still, a misinformed public.

As the count of dangerous parallels increases, so does the disturbing volatility, leaving the average citizens wondering of the direction in which efforts are being made to lead them. A discerning look at various analysts and commentators does, at times, provide some clarity on the trends and the ‘why’ behind the goings-on. However, fact-finding in the maze of information is the key. It does not help that most of the news channels are either so cluttered with shouting matches arranged between virulent speakers or are so tilted to one side.

The existing tinderboxes across the globe and closer home have in many ways confused the masses. This is probably the stuff that political parties want: to keep on the boil to distract, deflect and distort sane thinking. It’s probably wise in these times to fall back on common logic and chose what needs to be believed and decide what affects us the most. There are many shades of grey betwixt the black and white.