Since the majority of the Sunnis in Pakistan are Barelvis, the TLP has a vast reservoir of support that is matched by the large Barelvi network of mosques and shrines that it has succeeded in tapping into. Several events since 2017 have catapulted the TLP into limelight and allowed it to capture the imagination of the people. They include its stunning maiden performance in the 2018 General Election when it emerged as the fifth largest party in terms of vote share. 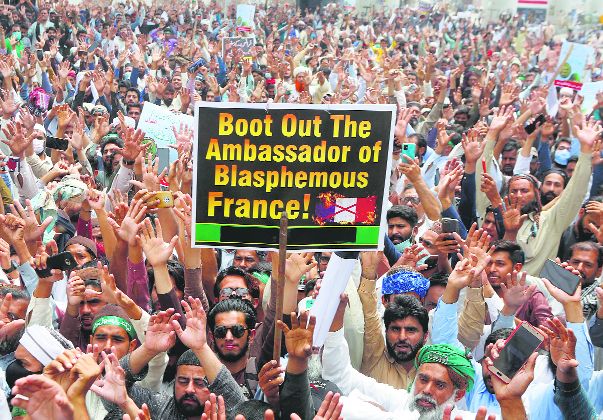 Predicament: The danger for Pakistan is that if the issue of the sketches of Prophet Muhammad in France is not resolved, the Barelvi upsurge could escalate. AP

The three-day upsurge of the Barelvi assertion, led by the Tehreek-i-Labbaik Pakistan (TLP) witnessed in the major cities of Pakistan in mid-April, seems to have subsided, at least for the moment. While it lasted, it led to clashes between the TLP and security forces, leading to the death of several people, including police personnel, injuries to scores, arrests of many more and damage to property.

What was ominous was that several police personnel were held hostage by the protesters (subsequently released) and clips on social media that went viral showed soldiers fraternising with the protesters and warning of taking matters into their own hands.

The TLP was formed in the wake of the 2016 execution of Mumtaz Qadri, a police guard, who killed the then Punjab Governor Salman Taseer for sympathising with Aasiya Bibi, a Christian accused of blasphemy in January 2011. The founder was Khadim Hussain Rizvi (1966-2019), a former employee of the Punjab Auqaf Department. Rizvi used a mixture of earthy Punjabi abuses, humour, fiery rhetoric and poetry of Mohd Iqbal and Sultan Bahu to attract people. His catchy slogan was: Gustakh-e-rasul ki aik saza, sar tan sey juda (there is only one punishment for the blasphemer, beheading). His son, Saad Rizvi, succeeded him in November 2019.

The Barelvis are the followers of Ahmad Raza Khan Barelvi (1865-1921) of Bareilly in India. Their trademark is popular sufism, a cult of shrines, and a profound reverence for the Prophet. This distinguishes them from the austere and literalist Wahabis and Deobandis. They are generally regarded as adherents of a gentler, more moderate approach, except when it comes to khatm-e-nabuwwat (finality of the Prophet-hood) and tauheen-e-risalat (blaspheming the Prophet). While both these elements are a fundamental matter of faith for all Islamic sects, it is the Barelvis who have operationalised them due to their philosophy of Aashiq-e-Rasool, or a ‘Lover of the Prophet’.

Since the majority of the Sunnis in Pakistan are Barelvis, the TLP has a vast reservoir of support that is matched by the large Barelvi network of mosques and shrines that it has succeeded in tapping into.

Apart from the movement around Qadri, several events since 2017 have catapulted the TLP into limelight and allowed it to capture the imagination of the people. These would include its three-week-long agitation in 2017, blocking the main route between Islamabad and Rawalpindi due to a perception that the khatm-i-nabuwwat oath of legislators was being watered down by the Pakistan Muslim League-Nawaz (PMLN) government. Then came its stunning maiden performance in the 2018 General Election when it received 2.2 million votes for the National Assembly, making it the fifth largest party in Pakistan in terms of vote share and the third in the critical province of Punjab.

This was followed by the Supreme Court’s acquittal of Aasiya Bibi in October 2018 of the charges of blasphemy that led to another TLP agitation, forcing the Imran Khan government to capitulate and set a dangerous precedent for the future.

Finally, the current protests are a follow-up to another capitulation of the Imran Khan government in November 2020 over sketches of Prophet Muhammad in France. The government had to sign an agreement with the TLP that it would take a decision in Parliament regarding the expulsion of the French Ambassador within three months, a deadline that was subsequently extended till April 20.

Subsequently, however, the government expressed its inability to ‘implement’ the agreement and arrested Saad Rizvi on April 12 in a pre-emptive swoop that led to countrywide protests and violence. The government again capitulated and agreed to present a resolution in Parliament regarding the expulsion of the French Ambassador, though it also banned the TLP under the Terrorism Act. This, however, is unlikely to dent the fervour and street power of its followers or the sentiments of millions who sympathise with its ideology.

Another factor has been the role of the military, which, since the 1980s, has promoted the rival Deobandis and Wahabis for use as jihadis in Kashmir and Afghanistan. Now, however, given the international attention on terrorism, the Barelvis have been brought to the foreground as a balancing force. The military also found the Barelvis useful in eroding the support base of Nawaz Sharif in the 2018 elections, especially in Punjab, at a time of heightened civil-military tension.

Pakistan’s predicament is, according to the country’s media reports, that disrupting relations with France would be a near disaster. Quite apart from how the EU would react, France has an important position in the IMF that is bailing out Pakistan; it is the headquarters of the Financial Action Task Force (FATF) on whose grey list Pakistan has been since 2018; 30 per cent of Pakistan's Air Force is French (Dassault Mirage III and the Dassault Mirage V); all five of Pakistan’s attack submarines are French.

Not surprisingly, the government has sought a compromise: a private member's resolution was introduced in the National Assembly, but only seeking a debate on the French Ambassador’s expulsion. At the time of writing, the Assembly has not been able to come to a conclusion due to procedural issues.

The danger for Pakistan is that if not resolved, the issue could escalate. Banned terrorist outfit Tehrik-e-Taliban Pakistan (TTP) has offered support, as has the mainstream religious party Jamiat Ulema-i-Islam of Maulana Fazlur Rehman. Others, too, could join the bandwagon. The TTP has publicly threatened to take revenge for “each drop of blood of the TLP members.” This is, perhaps, the first time that a Deobandi organisation (TTP) is trying to forge an alliance with an exclusively Barelvi organisation (TLP) for non-political purposes.

Another issue for the future is that if the ban continues (though speculation is rife that it won’t), would the TLP remain within the system or opt for the path of militancy and violence? This could have grave consequences for Pakistan.