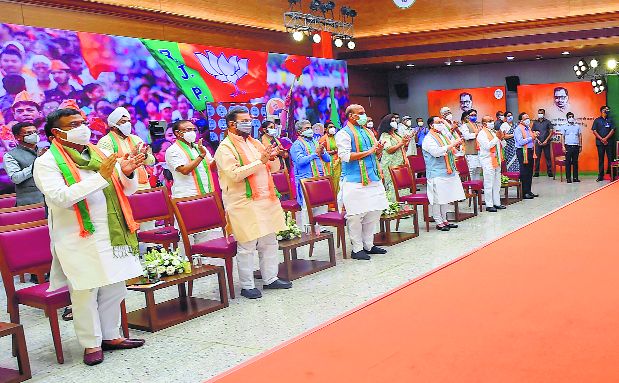 All set: The Sangh-BJP equation that was in a permanent flux has settled into a constant during the Modi government’s rule. PTI

An organisational restructuring in the BJP is rarely newsworthy unless the change is effected at the top or a big-time functionary such as Ram Madhav is dropped from the central team of office-bearers and Vasundhara Raje is shafted to pave the way for a leadership makeover in Rajasthan. Recently, JP Nadda, the BJP president, quietly tweaked the organisational hierarchy to reinforce a significant political message: the BJP will exercise complete control over the party and its apparatuses and the patriarch RSS’s interventions could become minimal, if not nominal. The Sangh-BJP equation that was in a permanent flux has settled into a constant in the Modi regime. PM Modi rules over a BJP-majority government that is not rocked by the coalition partners or an Opposition. Until he confronted his first challenge in the farmers’ movement, his authority appeared incontestable. The RSS is hands-off towards the protests. Its farmers’ front, the Bharatiya Kisan Sangh (BKS) issued innocuous statements. The paterfamilias is in no mood to rock the boat.

The BJP took advantage of its commanding position to minimise the presence of the RSS pracharaks in Nadda’s team and overturned an arrangement ostensibly cast in stone. BL Santhosh remains the general secretary (organisation), and there is no dilution in the power he wields as the second-most important person in the party. In the past, a general secretary, however influential, had two or more deputies ‘assisting’ him. This line-up of the general secretary and the joint general secretaries (organisation) under him was generally made up of obscure figures who avoided the media, although Sunder Singh Bhandari and KN Govindacharya were exceptions and liberally shared information and political insights. Santhosh and Ramlal, his predecessor, had a trio under them, comprising V Satish, Saudan Singh and Shiv Prakash all of who were ‘loaned’ to the BJP for long-term work.

Last week, the loanees were relocated in the BJP with new designations, their mandate vastly diminished. It is unclear whether the joint general secretary’s post will remain. Essentially the recast means the Sangh will have only Santhosh to deal with. He will be the sole conduit between the RSS and the BJP, and for all intent and purpose both will depend largely on the feedback he gives and the inputs he shares. A quintessential pracharak from Karnataka, he earned the moniker, poornavadi karyakarta (full-time volunteer). Every pracharak is a full-time volunteer but the sobriquet denoted Santhosh’s ‘exceptional dedication’. During his stint in the Karnataka BJP, also as a general secretary, he allegedly played his share of intra-BJP politics and was rarely on the same page as CM Yediyurappa. But he is credited with ‘discovering’ and nurturing young ‘talent’ such as Lok Sabha MPs Tejaswi Surya and Prathap Simha and the Karnataka BJP president, Nalin Kumar Kateel. The choice of protégés reveals Santhosh’s unmistakable preference for those who are wedded to hard Hindutva.

In that sense, Santhosh, as also the BJP brass, sorted out the existential dilemma that dogged Vajpayee when he was the PM. Vajpayee had the RSS snapping at his heels. If the VHP got aggressive and amped up the Ram temple demand with violent consequences, on occasions, it was the Swadeshi Jagran Manch (SJM) and the Bharatiya Mazdoor Sangh (BMS) that scuttled Vajpayee’s pet reforms. He was disinclined to give the Sangh fronts unbridled latitude, and suffered as a result.

Modi has no such issues, regardless of the problems he lived with in Gujarat from the VHP and BKS. He is adept in managing their occasional tantrums. In December 2019, when the VHP threatened to besiege the government if it would not intervene decisively to seek a ‘resolution’ of the Ayodhya ‘dispute’ and got the RSS sarsanghachalak’s endorsement for the agenda, the Centre earned more than a breather when the apex court cleared the way. For Modi, it was an opportune moment to dispel the few misgivings the VHP cast over his ‘commitment’. He presided over an elaborate ground-laying ceremony in Ayodhya to mark the start of the construction.

Of all RSS fronts, the VHP has the greatest potential to marshal agent provocateurs, whip up communal passions and immobilise an administration. If the outfit is given a free pass to flout the law, a government can breathe easy. This is what has happened in MP. The VHP galvanised its storm-troopers to strike terror in the minority-dominated pockets in the guise of collecting funds for the temple. CM Shivraj Singh Chouhan has embraced hard-core Hindutva, and giving the VHP leeway suits him politically. In UP, the temple’s epicentre, the VHP does little or nothing because CM Yogi Adityanath has everything laid out: a pliant state machinery, public opinion and the voluntary militia of his Hindu Vahini in case action was demanded.

In contrast, an issue stares the BKS in the face, but it refused to react. In the Centre-farmer face-off, all that the Sangh’s peasant wing asked for was guaranteeing the MSP in the open market and a designated court to adjudicate disputes related to contract farming. At no point did it suggest that the farming laws should be relooked, let alone repealed. Like the BKS, the SJM opted for the straight and narrow.

Had the RSS, the BKS and the SJM confronted the Centre on the peasantry, it would have been forced to respond and perhaps withdraw the laws. In 2015, it was an ultimatum the SJM served that nudged the government to freeze the proposed amendments in the Land Acquisition Act. The RSS astutely figured that keeping the peace with the Modi dispensation is mutually advantageous and disputes must be buried.