Budget a let-down on the education front

Such budgetary apathy would adversely affect the enrolment of the poor and marginalised communities and cause a jump in the dropout rate at schools. It fails to be inclusive of the lowest stratum of society and provides little or no relief to the poor and religious minorities as it glosses over the key concerns of access to education which have long prevailed in our country. 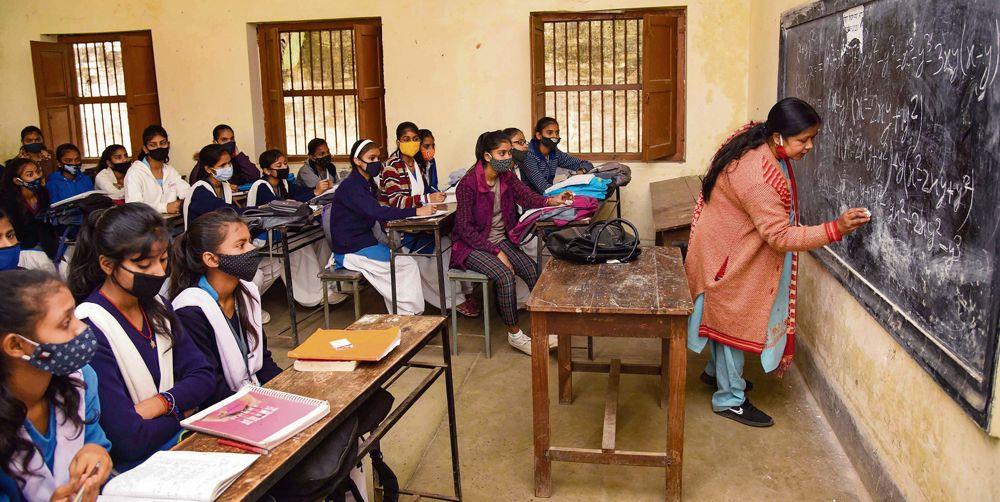 Hope belied: The Budget falls short of allocating 6 per cent of the GDP on education, as promised in NEP-2020. PTI

The Union Budget 2021-22 has come as a big disappointment for educationists as it has failed to allocate the required amount to undo the impact of the Covid-19 pandemic. The Budget fell way short of allocating 6 per cent of the gross domestic product (GDP) on education, as promised in the National Education Policy (NEP), 2020.

The Finance Minister’s assurances of more and better schools are likely to remain a dream with the allocation of Rs 93,224.31 crore, which is a mere

Rs 8,000 crore more than that of the financial year 2020-21. This slight increase of 5 per cent from last year is considered ‘disappointingly insufficient’ by education activists.

There was hope that the Budget for 2021-22 would bring some succour to the education sector, more so with the announcement of the NEP last year. The Union Cabinet had approved the NEP in July 2020, which aimed at the universalisation of education from the pre-school level to the secondary level. The situation demanded a more generous allocation of funds, especially due to the challenges that the education sector faces.

This allocation is totally insufficient to meet the required educational needs. The schools have been shut for nearly a year now due to the pandemic and it has been a real struggle for the education sector to keep going in the prevailing circumstances with a near-total dependence on digital education. A significantly higher amount is needed to promote infrastructure and digitisation of school education in view of the pandemic and also implementation of the NEP that would require more institutions, courses and other infrastructure around it.

In the educational sphere, it is the girl child who has been most severely hit due to the lockdown and the closing down of schools. An appraisal of the situation reveals how the education of girls as compared to the boys took a more drastic and severe downward turn. While the boys were given priority for online studies due to their access to computers or smartphones at home, the economic crunch due to Covid-19 put the girls at a disadvantage.

According to a survey, only 26 per cent of girls were able to get a smartphone for studies as compared to 37 per cent of the boys who clearly got a priority from their families when it came to accessing mobile phones and Internet facilities. No provision has been made in the Budget for children who were left behind in the digital race.

The survey, titled ‘Gendered impact of Covid-19 on education of school-aged children in India’, conducted by the Centre for Budget and Policy Studies, states that 71 per cent of the girls disclosed that they had been at home since the Covid-19 outbreak and were expected to do domestic chores even during the time of their online studies. As compared to the girls, only 38 per cent of the boys confirmed that they were asked to do any domestic work. The survey also cites a number of cases during the pandemic where girls were made to drop out of school and marry early.

The need is for a separate and special provision in the budgetary allocation towards girl child education, as was demanded by many educationists before the Budget. This demand stood ignored and contrary to all expectations as the Budget has provided just Rs 1 crore for the girl students under the National Scheme for Incentive to Girls for Secondary Education.

In the 2020-21 Budget, the initial allocation for the same was Rs 110 crore. This, however, was revised and reduced to Rs 1 crore only. The NEP, enacted with such fanfare last year, speaks of ‘gender inclusive’ funds for promotion of girl child education. But it also did not find a mention in the current budgetary allocation. This is when it is well known that nearly 57 per cent of the girls in India are forced to leave school in class X or soon thereafter.

Such budgetary apathy would adversely affect the enrolment of the poor and marginalised communities, especially girls, and cause a leap in the dropout rate at schools. It fails to be inclusive of the lowest stratum of society and provides little or no relief to the poor, caste and religious minorities as it glosses over the key concerns of access to education which have long prevailed in our country.

This is when the Right to Education Act, 2009, lays down free and compulsory education for children between the ages of 6 and 14 years in India. This Act had made India one of the 135 countries to have made education a fundamental right for every child.

However, this inclusiveness remains on paper only. Nothing has been implemented so far. The budgetary allocation for education that could have been an important step towards this end continues to be elusive even in 2021-22. How long do we have to wait — another year of promise which is belied in reality?