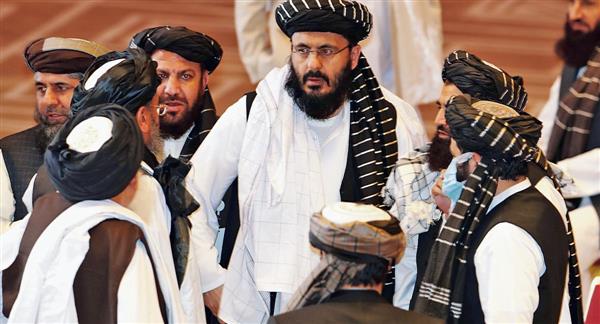 Deadlock: The conflict between the Taliban and Afghan government is set to continue.

Global attention on developments in Afghanistan is now focused on the uncertainties and confusion surrounding the ongoing American withdrawal. But the suffering inflicted on the people of Afghanistan by the ambitions of its neighbours, like Pakistan, and by the rivalries between external powers, notably the Soviet Union and the US, should not be forgotten. About 4.3 million Afghan refugees fled to Pakistan and Iran during the Soviet intervention. Soviet casualties included 13,310 killed. The Soviets departed from Afghanistan in 1992. What followed was a brutal civil war, pitting the Soviet-backed Najibullah government against the ISI trained, radicalised Afghan mujahideen, who were joined by 28,000-30,000 radicalised Pakistani Pashtuns. These were the developments which led to the emergence of the Taliban. The present American intervention in Afghanistan has lasted 19 years.

Pakistan appears to have forgotten that its Taliban proteges are almost exclusively Pashtuns, who constitute 42% of Afghanistan’s population. The majority 58% of Afghanistan’s population are made up of Tajiks (37%), together with relatively smaller numbers of Uzbeks, Hazaras (Shia), Baloch, Turkmen, and others. The united resistance was initially against the Soviet Union and thereafter against Pakistan and its Taliban proteges, who wanted exclusive control. It was Afghanistan’s legendary Tajik hero, Ahmed Shah Masood, who forged a military grouping called the Northern Alliance to resist advances by Pakistan and the ISI-backed Taliban. The alliance, in turn, was given political, military and diplomatic support by India, Iran and Russia.

Emerging from bases in Pakistan, the Taliban moved northwards, only to meet resistance from the alliance. The Americans started their post 9/11 military intervention two days after Masood was assassinated. In these circumstances, the exclusively Pashtun, Afghan Taliban, cannot come to power. They are not only unacceptable to the non-Pashtuns, who constitute 58% of the population, but also to a substantial number of Pashtuns who loathe their extremism. But, with the Americans set to leave, the Taliban and its ISI backers are continuing military operations to acquire more territory under their control before formal discussions with the government on a ceasefire. Pakistan’s aim is to have a Taliban-dominated government which would be beholden to it.

Recent changes in the Afghan Taliban’s leadership, both in Pakistan and in its negotiating team in Quetta, indicates the emergence of an uncompromising, hardline new leadership. Pakistan is, however, announcing cosmetic moves to avoid global sanctions, like placing the Taliban chief negotiator in Doha, Mullah Baradar, and Sirajuddin Haqqani, the head of the ISI’s favourite Afghan Taliban group, the Haqqani Network, under sanctions. This is laughable, as no one has any doubt that Haqqani, which operates from North Waziristan in Pakistan, remains Pakistan’s most important Afghan asset for operations within Afghanistan. There is also little doubt that in the minds of the Taliban leadership, their greatest achievement has been to force the sceptical President Trump to pack up and leave Afghanistan. While the Americans have welcomed the agreement of the Taliban to talk directly to the Afghan government, the Afghans have surely noted the recent appointment of Mullah Mohammed Yakub, as a member of the Taliban delegation for talks with the government. Yakub is the 30-year-old son of the Taliban founder, the late Mullah Omar, and a hardliner.

Even as American forces prepare to leave Afghanistan, the Taliban are not prepared to lay down their arms. The conflict between the Taliban and the Afghan government is set to continue, including in the non-Pashtun northern provinces. The ethnic Hazaras, Shia descendants of Genghis Khan, have close ties with Iran, which will inevitably play a more active role in Afghanistan. It is evident that even as the Pentagon prepares to end active combat operations, there will be pressures on the US to continue equipping the Afghan armed forces. There will also be moves to persuade the Americans to provide air support by retaining warplanes and helicopter gunships in places like the Bagram Base near Kabul, and in Kandahar, while also using carrier-based airpower. The US and its western allies would also be well advised to provide the Afghan government adequate financial assistance to have the resources to meet the Taliban challenge. New Delhi should also have serious discussions with the Taliban to ensure that the security of our diplomats in Kabul, Kandahar, Jalalabad and Mazar-e-Sharif, and for Indian personnel involved in aid projects, is guaranteed.

The recent visit of Dr Abdullah Abdullah, the chairman of the High Council for National Reconciliation in Afghanistan to India, has been timely and useful. Dr Abdullah is one of the few individuals who transcends ethnic, cultural and religious barriers in Afghanistan. His father was Pashtun and his mother a Tajik. More importantly, he joined Masood in the struggle against the Soviets and the Taliban, while becoming a trusted associate of the Tajik leader. The Afghan government thus has a highly experienced and respected political leader to head the government delegation in talks with the Taliban.

The Taliban have been in close touch with China, from well before the US intervention commenced in Afghanistan. China was then not seen internationally as being anti-Islamic. The persecution of Uighur Muslims by China is surely known to the Taliban. Are they going to speak up for their fellow Muslims, or will they remain silent like their Pakistani mentors? Finally, nowhere have women been treated so badly and brutally in the modern world as in Taliban-ruled Afghanistan. On October 5, Fawzia Koofi, the first woman Deputy Speaker of Afghanistan, was declared a nominee for the prestigious Nobel Peace Prize. Refusing to accept Taliban bigotry, she courageously proclaimed, despite threats from the Taliban: ‘Peace means the ability to live with dignity, justice and freedom. There is no alternative to democracy.’

Twin teens fall to death from 25th floor in Ghaziabad

In the North Western Railway, traffic was affected in some s...