Weakening of federal structure, increasing economic inequalities and the rise of communalism are creating fissures in society, and pose a real threat to the country. The question is, do we choose the path of repression or reconciliation? Take the people along on the path of development and secularism; only a united India will ensure a secure India 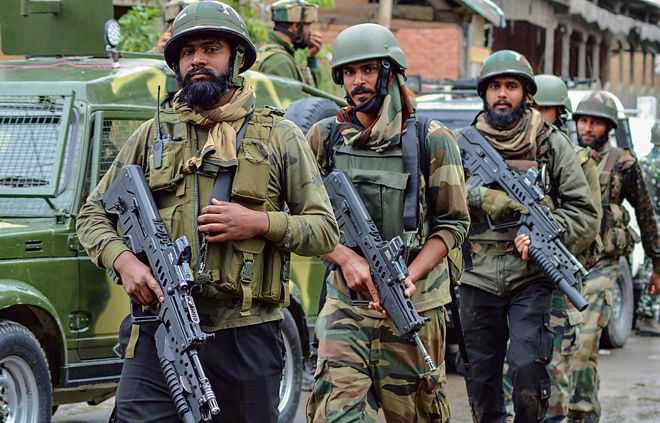 At a time when we, as a nation, are concerned about external threats from countries inimical to our security, what worries me equally, if not more, is the growing discontent within the country. In fact, the two go together hand in hand and a peaceful, united country can face external threats with great confidence and efficiency. The weakening of our federal structure, increasing economic inequalities and rise of communalism are some of the issues facing us. Each leads to fissures in society, creating a ready body of manpower and resources which can be easily manipulated and used by external agencies to create serious internal security threats.

One of the gravest challenges facing us is the weakening of the federal structure. This is not a development which has taken place overnight, but the process has now snowballed and is visible to all. In recent years, the Centre has abrogated to itself many of the financial powers of the states and in other matters also, like agriculture. Ever since the implementation of GST, the states (especially those ruled by Opposition parties) have lost a large part of their financial independence and are dependent on the Centre for even their dues, forget any largesse. According to a written statement in Parliament in February, a massive Rs2 lakh crore in GST dues was owed by the Centre to the states by November 2020. As per media reports, Maharashtra is owed almost Rs30,000 crore, Bengal claims Rs77,000 crore. The economists and accountants amongst us might want to comment on this sovereign default. Furthermore, the states were forced to borrow funds to meet their dues, thereby increasing their debt load and keeping the Centre’s books cleaner. The financial crunch facing the states is such that they cannot carry on normal development activities without the help of the Centre. In emergencies like floods, droughts, earthquakes, etc, they are utterly helpless and dependent upon the Centre. The Centre follows a carrot and stick policy, which leads to further increase in tensions that exist. This is also a part of the weakening of the federal structure, with the states left holding the bag. This will lead to antagonism and alienation.

The weakening of the federal structure can further be seen in the enactment of laws regarding agriculture, which is a state subject. This has led to one of the biggest and longest agitations in recent history. Farmers across the length and breadth of the country have come together in a face-off with not only the Government of India, but also the mighty industrial honchos whom they suspect to be behind these laws. We are entering uncharted territory with these new laws, where large sections of the peasantry are being alienated. This has led to tensions between urban and rural India and does not augur well for our security. Added to this is the fact that most of our officers and men in the police, paramilitary forces and armed forces come from rural areas and are sons of farmers. They form the backbone of our security forces. The role played by some sections of the media in heightening this divide is highly biased and suspect. Foreign agencies will not be sleeping on these new self-made fissures and will use people both inside and outside the country to create further problems. Evidently, large funds have already been sent by dubious organisations — this will all add fuel to the existing discontent. Many parts of the country have been embroiled in internal conflicts (Kashmir, Punjab, Assam, Manipur, Nagaland are all a case in point), are we not again amplifying the voices of dissent and alienating sections of our society?

The next serious threat is the open proliferation of communalism in most parts of the country. It was always present below the surface and used as vote banks during elections. There were periodic clashes between the two communities and rioting also took place. At some point, the strong criminal underground owing allegiance to both the communities started playing a major part in the clashes. This was witnessed in the Bombay riots, as also in other states. Recent developments have pushed secularism further into the background and differences have begun to surface more openly and a sharp polarisation is taking place. Issues like CAA and NRC have increased the polarisation of society and further heightened the insecurities of the minority communities. The minorities fear that their Indian citizenship itself is in danger and that it may lead to large-scale disenfranchising of a community. These laws are still hanging fire and when acted upon have the potential to aggravate the security situation. Added to these have been other incidences to keep the pot boiling regarding suspect cow slaughter and ‘love jihad’ laws, which again target Muslim youth. Laws have been enacted in BJP-led states and cases are being registered and the accused arrested.

This total polarisation of communities is not a good thing for our internal and external security. The minorities are in sizable numbers and if misled, can pose a threat to our internal security. Unlike Pakistan, Myanmar or Afghanistan, who have primarily chosen the path of repression against minorities, we had so far walked the path of secularism and tolerance. This has been our strength not only by creating a vibrant democracy and a growing economy, but also globally it gave us a voice in democratic forums. The foreign media today is increasingly describing India as a state which no longer tolerates dissent and is bracketing us with countries which have throttled freedom.

In case of hostilities, we would have to look over our shoulders while facing the enemy. The recent occurrences in Ladakh are a case in point. We have had trouble at the LAC and LoC because China and Pakistan have never really accepted the border lines. Now some kind of temporary détente seems to have been worked out, but can we repose trust in it? Last year, the ceasefire violations were the highest in recent times. China has never accepted the unilateral change in the status of J&K after the abrogation of Article 370, and the resulting tension on the border has a direct correlation. The entire erstwhile state of J&K was under lockdown for a full year, hundreds of additional companies of PMFs have been deployed since then, crores have been lost in revenue. Politicians chest-thumping on Aksai Chin and PoK rarely have any personal stake in the battles which follow. Only a greenhorn would say that the Kashmir issue is dead. It reminds one more of the lull before the storm.

Unemployment and economic disparity are ever increasing. The disparity between the rich and poor is reaching mind-boggling levels. These are creating ripples in society across the board and we may soon be faced with a tsunami of protests creating further law and order situations. This inequality of income and unemployment levels are ticking time bombs perhaps posing a greater threat to our internal security than the enemies across the border. The Maoist and Naxalite movements have had large-scale consequences spread through numerous states — Chhattisgarh, Andhra Pradesh, Jharkhand, Karnataka and Maharashtra have all suffered extensively. The root of these movements lay in the perceived disparity and exploitation felt by the cadres who joined.

It would be in the national interest if we could settle some of these and reduce the tensions. The question is, do we choose the path of repression or reconciliation? We must remember that these are our people and our country. We have to make a choice, our leadership has to make a choice, for we stand at the crossroads of history. All my life, wherever I have gone in the country, the common man has wanted peace and education and health for his children. It is the leadership with its vested interests which advocates divisiveness and is an obstacle to peace. Take the people along on the path of development and secularism to form a united and secure India free from fissiparous digressions.