Chance for India to make its mark on UN stage : The Tribune India

Chance for India to make its mark on UN stage

The UNSC meeting today under PM Modi’s presidentship would be the right occasion to walk the talk and showcase the Indian ‘commitment to international law’ so as to be taken seriously as a global solution provider. As it is said, res ipsa loquitur — things speak for themselves. Hence, the right content in the PM’s presidential address would do so. The UNSC monthly presidency provides a unique opportunity to showcase India as a ‘different’ power. 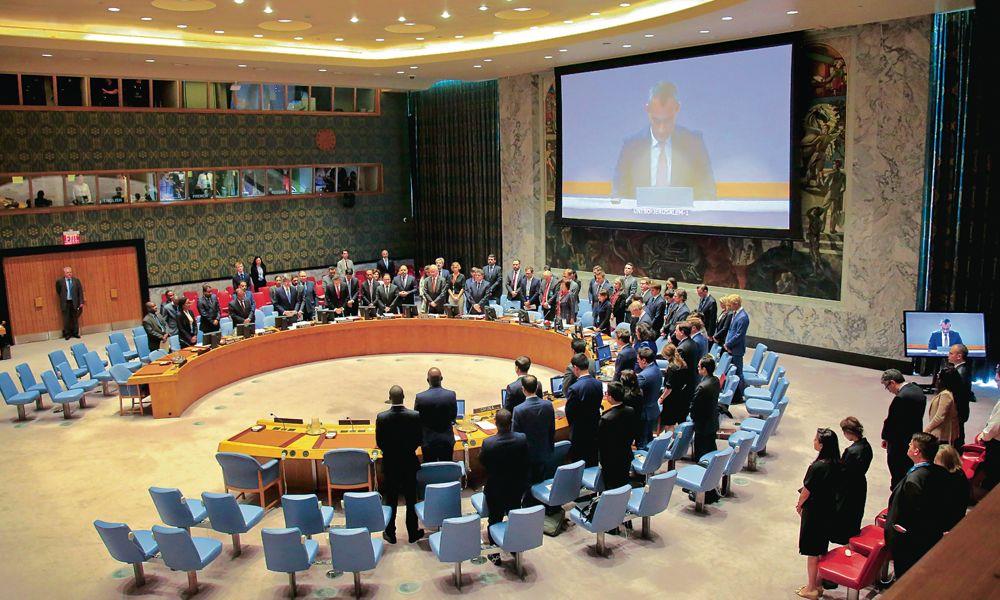 At helm: Peace and security should be the framework for India’s UNSC August presidency. AP

India has assumed the monthly presidency of the United Nations Security Council (UNSC). On August 1, India took the seat at the head of the proverbial horseshoe table after a decade. India would be a “voice of moderation, an advocate of dialogue and a proponent of international law”, S Jaishankar, the Indian External Affairs Minister (EAM) said.

Though India took up the non-permanent seat of the UNSC for the seventh time on January 1, 2021, the assumption of the rotational presidency has come to India for the month of August. On August 9, Prime Minister Narendra Modi is slated to chair the meeting of the heads of government of the UNSC members.

The UNSC monthly presidency is high on symbolism. Still, it provides a unique opportunity to showcase India as a ‘different’ power as well as to make a difference to the functioning of the UNSC and to international peace and security. In global peace and security concerns, India will be required to express its position, and if possible, even propose a solution. There are at least four crucial areas wherein the Indian leadership will matter. The August presidentship can enable India to sow the seeds that could yield dividends by the end of December 2022 when the membership would end.

First, the Indian statement (June 2) by First Secretary Vidisha Maitra called for “meaningful participation of women in decision-making, substantially strengthen prevention efforts, deepen the effectiveness of peace-building and develop stability in society.” This issue pertains to the long-standing UNSC resolution 1325 (2000) that was a landmark step for linking gender equality with the maintenance of international peace and security. It has recognised women’s participation as key in resolving conflict and securing peace. As a corollary, India could lead the Council to effectively integrate ‘women, peace and security’ (WPS) considerations, especially by including the list of “terrorist entities involved in violence against women in armed conflicts.” In fact, this needs to be duly supplemented by the growing concerns on climate change exacerbating sexual and gender-based violence (SGBV) against women. India needs to add greater value, urgency and shape to the UNSC agenda on WPS.

Secondly, the statement (June 8) of the Deputy Permanent Representative, R Ravindra in the UNSC debate on International Residual Mechanism for Criminal Tribunals (IRMCT) indicated another front wherein India reiterated its “support for the mechanism and commends its contribution to the fight against impunity and to the preservation of the legacy of the international tribunal for former Yugoslavia and the International Criminal Tribunal for Rwanda” and called for adherence to “the principles of justice, impartiality and fairness.” It is noteworthy that the Indian statement took note of the work of the mechanism for scheduling judgment in June 2021 in three pending proceedings (Mladic case, Simatovic case and Nzabonimpa case). Though India is not a party to the 1998 Rome Statute of the International Criminal Court, yet this support to the residual mechanism for the ICTY and ICTR became crucial in underscoring as well as drawing of the ‘red lines’ for the perpetrators of SGBV in the conflict zones. India speaking up in the matter with concrete ideas, content and the future roadmap is essential.

Thirdly, the PM’s reference to trusteeship of the planet at the G20 (Riyadh) virtual meeting on November 21, 2020 was significant. In order to provide flesh-and-bones to the said idea, India needs to promote and push for the idea of revival of the UN Trusteeship Council with a new mandate for the environment and the global commons. The UNSC is the right forum and the PM making out a case in his August 9 address to the virtual UNSC heads of government meeting would be an ideal occasion for this idea that the post-Covid world desperately needs.

Lastly, it is now known to all that India does aspire for a permanent seat at the horseshoe table. It appears that in the earlier six Indian stints as the non-permanent member, overt and covert efforts were made to get the agenda item dropped on ‘India-Pakistan Question’. Still, it now makes great sense to deftly set in motion a process to have this item de-listed from the UNSC agenda. Notwithstanding the fact that the UNSC has not addressed the issue of J&K after the last UNSC resolution 307 (1971), Pakistan still harped on it through an urgent communication from the Pakistani Foreign Minister on August 13, 2019, in the aftermath of the decisive Indian internal measures on August 5 of that year.

At the time, closed-door parleys were held among the UNSC members on August 16. The move sought to push the UNSC to “take stock of an issue” that the Council did not address “in several decades” and it was also known beforehand that “several members will emphasise the importance of de-escalation, diplomacy and restraint while referring to previous Security Council resolutions as a guide to addressing the crisis”.

Therefore, it is high time India sets in motion an emphatic process by assuring its resolution in the bilateral mode and create a consensus among the UNSC members to have the agenda de-listed after more than seven decades. Maybe the Indian EAM needs to give this issue his top priority by both invoking his career long experience as well as to vindicate the trust reposed by the PM. It would be worth trying for the EAM to park himself at the Permanent Mission of India to the UN (PMI) in New York at least during the August presidency to personally lead the consultations in the matter. Possibly, it would be a good idea even to reach out, seek ideas and strategise with some of the finest Indian scholars and MEA veterans, including his cabinet colleague Hardeep Singh Puri, who last chaired the UNSC presidency a decade ago.

We need to ensure that most of the issues on the agenda of the UNSC are laced with critical issues of international law, and hence, the statements periodically read out by the Indian representatives at the UNSC meetings need to contain concrete international law elements and position both to indicate India’s seriousness in addressing some of the UNSC agenda items as well as to provide a concrete basis for their resolution.

Jaisahankar’s statement on assumption of the August presidency on being a ‘proponent of international law’ as well as international law being a crucial part of the tripod of the Indian vision on maintenance of international peace and security, needs to be reflected in all the substantive issues. The PM also needs to ‘speak the language of international law’ in confabulation with heads of state and government. The August 9 meeting would be the right occasion to walk the talk and showcase the Indian “commitment to international law” so as to be taken seriously as a global solution provider. As it is said, res ipsa loquitur — things speak for themselves. Hence, the right content in the PM’s presidential address would do so.