CPC is game for a two-theatre and three-nation combat zone — Tokyo, Taiwan and New Delhi. The first is a nuclear target, implying either air power or short-medium range surface-to-surface nuke warhead, the goal being the Japanese islands claimed by Beijing. The second target, Taiwan, has to be a combination of army, marine and air cover for which the collateral is bound to be humongous. The third, India, is regarded as a ‘nagging irritant’ pretending to ‘punch above its weight’. 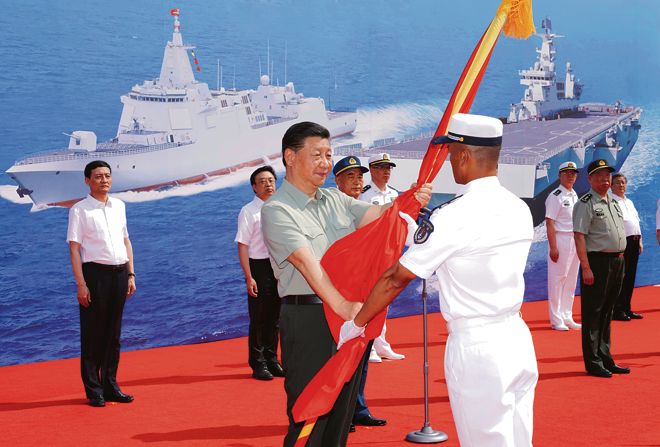 Increasing visibility: China’s belligerence against nations that it thinks are its rivals has coincided with efforts to increase its military power. AP

Japan has been singled out as a nation to be threatened because two weeks ago, Taro Aso, its Deputy Prime Minister, had said: “Japan must defend Taiwan.” Isn’t there an uncanny similarity with the war cry of Roman senator Cato the Censor (234-149 BC): “I consider that Carthage must be destroyed”?

Is the CPC in its senses? Has it lost its balance and mental stability? Is it afflicted with an incurable psychosis? History is replete with instances of psychopaths getting high on power and low on sense of judgement to go on the rampage, ending pathetically with self-destruction, like Hitler in 1945. In the process, however, the present-day CPC under Xi Jinping has forgotten (or is ignoring) founder-guide Mao Zedong’s words: “The atom bomb is a paper tiger.”

The utterances, however, came when China didn’t possess nuclear technology. Hence, it was said more in jest to boost the morale of a weak nation’s technological deficiency. By pooh-poohing the Americans and the Soviets, it sought to camouflage fragility, helplessness and an inferiority complex. Soviet leader Nikita Khrushchev, however, had rightly figured out the complex psyche of the CPC leaders. He perceptively observed: “China craves for war.” In August 1969, the Time magazine identified Mao-led CPC’s diabolical plan: “How many border battles before an all-out war?”

In the South Asian context, the real story awaits India, even if it takes part in the coalition of nations to take Beijing head-on. If not today, surely in the near future, as the CPC penetrates the Asian heartland notwithstanding vulnerabilities around the Pamir Knot where meet at least eight countries/regions: Tibet, India, Pakistan, Afghanistan, Kazakhstan, Tajikistan, Uzbekistan and Turkmenistan, six of which are landlocked.

Nevertheless, it’s this terrain which was referred to by English geographer Halford Mackinder: “Who rules the heartland commands the world island; who rules the world island commands the world.” Obviously, the 21st-century CPC has targeted Mackinder’s grandiloquence to fulfil its ambitious global supremacy — to develop an alternative land BRI (Belt and Road Initiative) to supplement the existing sea line of communication (SLOC), which traditionally has been China’s Achilles’ heel.

Simply put, the CPC wouldn’t accept anything short of both. It, therefore, has twin options in mind — land and sea — as the history of the last 300 years shows that without sea combat capability, none can be a superpower. Understandably, therefore, China assiduously followed the philosophy of the once-mighty Soviet “sea power of the state”, so successfully propounded and put up by arguably the most accomplished of Moscow Admirals, Sergei G. Gorshkov. Little wonder then that the CPC-controlled navy has overtaken ship-by-ship strength of the once-mightiest American navy.

It’s clear now. The CPC is game for a two-theatre and three-nation combat zone as the latest “nuke Japan” words reveal — Tokyo, Taiwan and New Delhi. The first, as declared by the CPC, is a nuclear target, implying either air power or short-medium range surface-to-surface nuke warhead (ballistic) missile, the goal being Japanese islands claimed by Beijing. The second target, Taiwan, has to be a combo of army, marine and air cover for which the collateral is bound to be humongous owing to limited land space with a high demographic density. The third, India, in the CPC’s eyes, is a “nagging irritant” pretending to “punch above its weight”. Having already penetrated deep into India’s trade, commerce, strategic infrastructure, investment, telecom, real estate, China-imported criminal espionage and financial fraudsters wreaking havoc in the hinterland, the killing of Indian soldiers and simultaneous slicing of the border terrain come comparatively easy to the CPC-PLA combo of surprise and deception.

No wonder, the July 21-22 Tibet visit of Xi Jinping has targeted India all the more, as he came within 15 km of the Indian border, following the route once taken by the fugitive Dalai Lama to cross over to India in March 1959. “On to Tawang” is “Mission Xi”, hence, Xi’s visibility at Nyingchi, 436 km from Lhasa, but just a stone’s throw from the Indian posts of Khinzemane and Dhola; Hathung La and Karpo La. However, none from the Indian establishment so far has made any noise about Xi’s ‘provocation’ by coming so near to India’s sovereign territory. Conversely, recall the then President Pranab Mukherjee’s visit to Arunachal Pradesh in December 2013. Remember China’s diplomatic protest — “Indian actions complicate the boundary question”. Again, deep inside India, and far from the border, when the Dalai Lama met the Indian President in December 2016, came the spiteful comment by the CPC: “Disturbance to China-India ties”. How obnoxious and repulsive Han wolf warrior diplomacy could be!

Xi’s visit to Tibet, next to Arunachal Pradesh, came on the day of the India-UK naval exercise in the Bay of Bengal near “choke points” between the Indian Ocean and South China Sea. “The sea belongs to China” is what seems to be on Beijing’s mind. Thus, in case of a reversal at sea, the Chinese hope to come hard on the Indian land front, positioning themselves to bargain from a position of strength at least in the Himalayas.

So, let Tokyo, Taipei and New Delhi brace themselves for the worst with the US navy’s diminishing capability to take on the desperate CPC-PLA duo. Indeed, the drawbacks of the US navy today are too stark to be missed. It simply cannot fight the water war solo. Gone are the days of the redoubtable prowess of the Pacific Theatre Command of the Second World War. There’s got to be a coalition of naval armada. Hence, the need for Quad: Canberra, Delhi, Tokyo and Washington.

Against this background, let there be no illusion about the development of real-time physical confrontations unfolding thick and fast. The problem is that whereas none of the powers wants war, circumstances may lead to the start of a war. And there clearly are emerging fronts which China has focused on.

Interestingly, whereas the coalition would be more interested to preserve and protect its collective interests in the ocean-island front of Japan and Taiwan, the land front of India doesn’t appear to hold much promise to the coalition. It’s because the land front is vast, and an incredibly difficult and logistical nightmare even for those whose terrain fall thereunder. So, India once again faces the stark prospect of a fight with China on the high hills of the Himalayas.