From a realistic perspective, strategic infrastructure as a tool for consolidating supremacy in the disputed territories implies both an offensive posture as well as a defence mechanism. Offensive because in the event of a border war with India, the new railway will fundamentally boost the manoeuvring capability of Chinese troops and weapons to be moved within a short time on a larger scale than before. 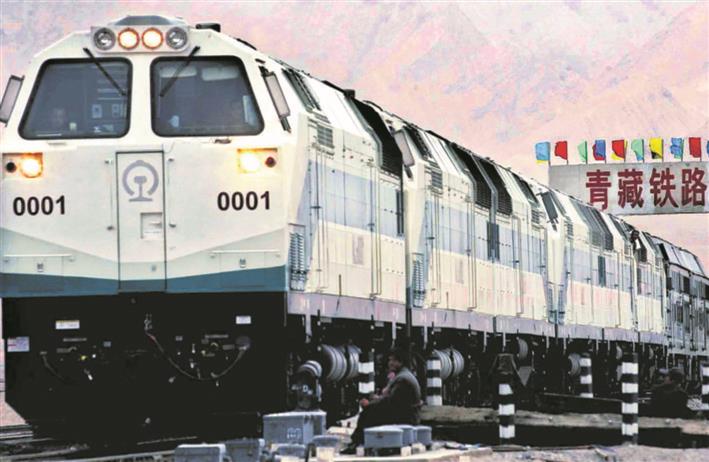 Since its occupation of Tibet in 1950, all major infrastructure development in this region has been driven by China’s strategic calculations and security needs for consolidating its control over Tibet and secure its position on the long Himalayan borders with India, Nepal and Bhutan. From the construction of highways and bridges in the early years of its entry to Tibet, to bringing railway connections to the major cities of Tibet, including capital Lhasa, in 2006, Beijing’s emphasis on building strategic infrastructure has been consistent and consequential. In addition to cementing its grip over Tibet, the long disputes over the border with India and to some extent with Bhutan add the extra strategic impetus in spurring a strategy-oriented infrastructural spree in Tibet.

It is in this context that the recent statement of General Secretary of the Chinese Communist Party (CCP) Xi Jinping on the Ya’an-Nyingtri section of Sichuan-Tibet Railway is made —and, in fact, is to be analysed and understood. Xi made three key points on why the new railway matters in governing Tibet as a means for “safeguarding national unity, promoting ethnic solidarity and consolidating stability in the border.” An attempt is made here to decode Xi’s statement and analyse it in the broader political and strategic context of China’s colonial project in Tibet as well as its contestation with India.

First, Xi’s euphemism of ‘safeguarding national unity’ means to further the integration of Tibet into the Chinese system and big infrastructures, like the railway lines, are often seen as powerful tools to project power to far periphery regions and govern them from the metropolis. From Beijing’s perspective, the railway lines in Tibet not only strengthen the scale and speed of force deployment and movement of military assets in the case of a major political and security contingency in Tibet, but also its ability to exploit Tibet’s vast natural resources, such as lithium and chromite, which are abundant in the region where the new railway line crosses.

Second, to strip its political coat, ‘promoting ethnic solidarity’ implies the assimilationist role of the railways in mingling and melting Tibetans into the Chinese way of life and culture, like language and values, which has increasingly been aggressive under Xi Jinping’s power. This is because unlike the inconvenient road or expensive airway, the railway has the advantage of freighting a large number of people or goods to long distances at cheaper and faster rates. In the context of China’s assimilationist policy, the new railway connection is to play a greater role in bringing more Chinese, from miners and migrant workers to businessmen, to work and settle in Tibet — preferably in the border areas like Nyingtri.

Xi’s statement also indicates that China wants the Tibetans not only to see the railway lines as a positive development that they should welcome, but also feel it as an expression of solidarity from a supposedly advanced big Chinese brother. Here, the railway being the gift of development, and therefore, the obligational need of Tibetans to feel and appreciate the ‘Chinese generosity’. What is missing is the agency of Tibetans in choosing whether they really need a railway line and where they need it. The issue is that they not only have to accept it, but they also have to be indebted for it.

Third, the idea that the railway as an instrument to ‘consolidate stability’ at the disputed border with India does not mean maintaining stability as peace with the status quo. In fact, the expression is contradicting itself in that, if one party attempts to alter the status quo at the border, then the other will challenge it which will lead to more instabilities not only at the border per se, but also within the bilateral relationships as well as at the multilateral levels. This has indeed been the case with Doklam in 2017 and even more so with Ladakh today. The term ‘stability’ has to be understood as stable due to domination at the border rather than stability as peace agreed upon by the two nations.

Therefore, from a realistic perspective, strategic infrastructure like the railway as a tool for consolidating supremacy in the disputed territories implies both an offensive posture as well as a defence mechanism. Offensive because in the event of a border war with India, the new railway will fundamentally boost the manoeuvring capability of Chinese troops and weapons to be moved within a short time on a larger scale than it was possible before. Strategic development and strategic connections to frontier areas are meant to enhance China’s strategic advantage vis-a-vis India in order to score a long-term edge over the latter as a resolution to the boundary dispute appears to be more challenging, with leaders from both sides vowing to defend every inch of what they perceived to be their respective territories.

The defensive role comes with the huge capacity of the railway in transferring more Chinese people to work and settle in towns and villages at the border. China is constructing new towns and enlarging old ones to increase the population size at the border by forcibly relocating Tibetan nomads and farmers to Lhoka and Ngari, which are respectively adjacent to Arunachal in the east and Ladakh in the west. With the development of more economic opportunities like tourism, mining and constructions in the border areas, it also encourages Chinese settlers to put their root there to defend the motherland. In the long term, the growth of Chinese settlements at the border regions can be used as a civilian bulwark to fortify Beijing’s position on what its military can annex/control territories at the border.

In a nutshell, regardless of some of the positive side-effects of the new railway for the local Tibetans, the fundamental logic of the Chinese state, as Xi Jinping pointed out, is to integrate Tibet, assimilate its people and secure a dominant position in the boundary disputes with India.