China, US emerging as adversaries over Tibet : The Tribune India

China, US emerging as adversaries over Tibet

Threatening to upset China’s plans is the Tibet Policy and Support Act passed by the US House of Representatives on January 28, amending the Act of 2002. The Act is more direct in its support for the Dalai Lama and incorporates potential punitive measures. Especially important are the recommendations that China resume talks with the Dalai Lama or Tibet’s democratically-elected leaders sans preconditions. 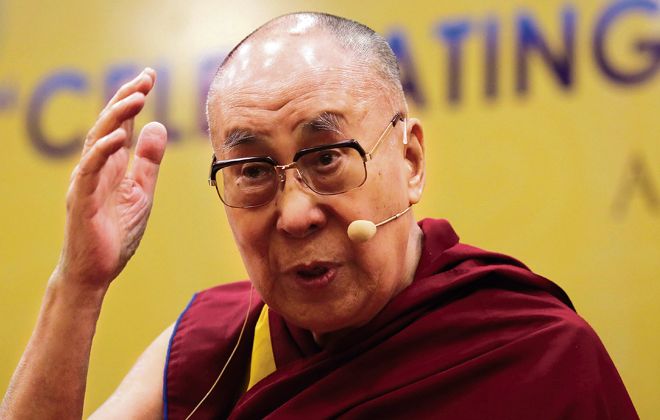 China’s Communist authorities appear to have reached the conclusion approximately 18 months ago that the time for selecting the reincarnation of the XIVth Dalai Lama is drawing near. Since then, they have stepped up efforts to capture the hearts and minds of the Tibetan people and adapt Tibetan Buddhism to ‘socialism with Chinese characteristics’. China’s official media has recently begun to frequently refer to ‘Chinese Buddhism’. A blatant indication of the efforts to project Buddhism as Chinese is the article authored by the Chinese Ambassador to India Sun Weidong and published in an Indian newspaper in November last year. The article claimed that ‘Buddhism was introduced into Tibet from the Tang Empire’, completely ignoring that Padma Sambhava and numerous other sages had travelled from India to Tibet and China carrying Buddhist religious texts.

Beijing’s central objectives are to undermine the influence that the XIVth Dalai Lama wields over Tibetans inside China and around the world and ensure that they accept the reincarnation of the Dalai Lama who would be selected by the Chinese Communist regime. This is essential for Beijing to legitimise and secure its hold over Tibet.

The Dalai Lama, meanwhile, declared he will live till he is at least 113 years old and made explicit that his reincarnation will not be found within the jurisdiction of an authoritarian regime and, specifically, China. He has, additionally, raised doubts as to whether he will be ‘reincarnated’ or opt for the procedure that allows him to select an ‘emanation’.

Beijing has since then been insisting that the next Dalai Lama must be reincarnated. An equally important objective for Beijing is dissipating the anti-Chinese, or more specifically, the anti-Chinese Communist Party (CCP), sentiment among the Tibetan Buddhist monks and nuns. In addition to tougher measures, it is persuading the Tibetan Buddhist clergy to adapt Tibetan Buddhism to ‘socialism with Chinese characteristics’. They are simultaneously being given ‘patriotic education’ to make them loyal to the Communist regime in Beijing.

The efforts coincide with the CCP’s effort to promote acceptance among Tibetans and Buddhists worldwide of Gyaltsen Norbu, appointed by the Chinese in 1995, as the legitimate Panchen Lama. He has, accordingly, recently begun staying for extended periods in the Tibet Autonomous Region (TAR) and, for the first time, travelling to various places in TAR like the Labrang Tashikhyil monastery in the Labrang area in Amdo, Nyingchi, opposite Arunachal Pradesh and Ngari (Ali), opposite Ladakh. The aim is to facilitate his assumption at an appropriate time of the traditional historical role as the reincarnate Dalai Lama’s Tutor.

Threatening to upset China’s plans is the Tibet Policy and Support Act passed by the US House of Representatives on January 28, amending the Act of 2002. Since the Tibet issue has wide bipartisan support, the legislation is likely to soon be passed by the Senate and then forwarded for the US President’s signature. The amended Tibet Policy and Support Act is more direct in its support for the Dalai Lama and incorporates potential punitive measures. Especially important are the new recommendations that the Chinese authorities resume talks with the Dalai Lama or his representatives or democratically-elected leaders of the Tibetan community without preconditions; provision for sanctions against Chinese officials who interfere in the ‘reincarnation’ process of the next Dalai Lama; and visa sanctions, freezing of US assets of those sanctioned and suspension of business transactions between the Chinese officials and US citizens and companies. It opposes any effort by the Chinese authorities to identify, select, educate or install Tibetan Buddhist religious leaders, including any future Dalai Lama, in a manner inconsistent with the Tibetan Buddhist faith and community. It adds too that the US Administration should not authorise China to establish any additional consulate in the US till a US consulate is established in Lhasa.

The proposed Act seeks to change China’s policy on Tibet. For example, it has been China’s consistent position that the negotiations only address the Dalai Lama’s personal concerns and are not with the Tibetan administration-in-exile. Talks have, therefore, been thus far restricted to between the Dalai Lama’s envoys and representatives of the CCP Central Committee’s United Front Work Department (UFWD) and ‘democratically elected leaders of the Tibetan community’ have not been entertained.

The proposed sanctions additionally give teeth to the Act. Though China’s official Global Times newspaper quoted an expert as saying this ‘long-arm jurisdiction’ has limited impact, the newspaper ignored that many Chinese cadres travel to the US, have relatives residing abroad and children studying in US colleges. They could all potentially be adversely impacted. The visa sanctions have a precedent. In 2013, Spain’s National Court had issued an arrest warrant against five former Chinese leaders, including former Chinese President Jiang Zemin, former Prime Minister Li Peng and Chinese President Hu Jintao, on charges of ‘genocide’ in Tibet. The case was finally dropped because of changes in law, effected reportedly due to pressure from China.

The US Congress has also authorised grants from 2021 till 2025 totalling over $9 million each year to the Tibetan administration-in-exile, Tibetan communities in India, Nepal and the TAR and additional amounts to Radio Free Asia and Voice of America. While the amount is the same as last year, it confirms continuing US support to the Tibetans and will cause discomfort to the Chinese authorities. The Bill passed by the US House of Representatives bolsters the Dalai Lama’s negotiating position with the Chinese and, once signed by the US President, will give the US an additional lever over China.