The Chinese are not without leverage in Europe. European giants like Volkswagen and Daimler depend on the China business for their profits. But in the current global climate, China is locked in a seemingly unending conflict with the US and public opinion in Europe is pushing its politicians to take a tougher stand against China on account of human rights. 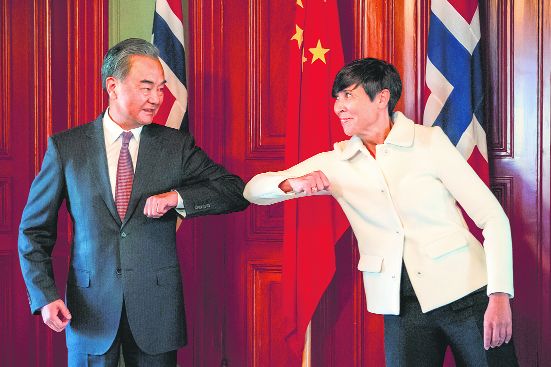 Bilateral Boost: China is trying to shore up relations with other countries after ties with the US dipped.

Even as we in India focus on our deteriorating relations with China, Beijing, conscious of its travails with the United States, is busy attempting to shore up its ties with other important partners.

In the last week of August, Chinese Foreign Minister Wang Yi undertook a tour of Europe, visiting Italy, the Netherlands, Norway, France and Germany. This was his first post-pandemic visit to the region and took place in an environment of greater European scrutiny of China on account of Hong Kong, Xinjiang and the handling of the Covid outbreak.

Just how important Europe is at this juncture was indicated by the fact that Wang’s tour was followed by the visit of his predecessor Yang Jiechi to Spain and Greece. Yang, who is the director of the powerful Foreign Affairs Commission chaired by Xi Jinping himself, is viewed as being more influential in the Chinese system. In a written interview with Xinhua, Yang said that the EU was “one of the most important foreign relationships for China.”

At one level, Wang’s visit was a sort of victory march to tell the Europeans that the Chinese economy had regained its momentum and could be a partner in their recovery process. It was also an exercise to shore up China’s standing with the EU, its largest trading partner. An important goal was to prevent the fire that had been lit against China in the US from spreading to Europe.

But the outcome was not a particularly happy one. Almost all his interlocutors, reacting to the strong public opinion in Europe, raised the issue of Hong Kong and Uighurs. Meanwhile, European businesses are worried about the fallout of the Hong Kong national security legislation and the negative public opinion at home.

Even as the Wang tour reached France, the European Union’s top foreign policy official, Josep Borrell offered a wide-ranging critique of China in two opinion pieces. He criticised China’s growing authoritarian tendencies and its vision of the world order prioritising economic and social rights over political and civil rights. He also said there were serious imbalances in the EU’s relationship with China, especially the lack of market access for European businesses. Last year, in its strategic outlook document, the EU had declared China to be a cooperation partner, as well as an ‘economic competitor’ and ‘systemic rival’.

While in Germany, Wang got into a highly publicised spat when he criticised the Speaker of the Czech Republic Milos Vystrcil for making a visit to Taiwan to promote business links. He accused Vystrcil of ‘short sighted behaviour and political opportunism’ and said he would ‘pay a heavy price’ for his actions. The Czech government was not amused and called in the Chinese ambassador to complain about the tone of Wang’s statement.

On Monday, China and the EU will have held their summit meeting led by German Chancellor Angela Merkel as the current chair of the European Council and President Xi Jinping. On the eve of the summit, the EU Chamber of Commerce in China released a position paper with 800 detailed recommendations for improving the business environment spread across 34 industry areas. It focused on issues that required urgent attention such as limited market access and the complex regulatory environment that prevented European businesses from functioning properly in China. It also called for a ‘political agreement’ to finalise the bilateral investment agreement that has been hanging fire for the past seven years, by the end of 2020.

In a move that cannot have been particularly comfortable for Beijing, and in the midst of Wang’s tour, Germany issued the policy guidelines for its first Indo-Pacific strategy. The aim of the document, the German government press release said, was to make “an active contribution to the shaping of the international order in the Indo-Pacific.” The German definition of the Indo-Pacific is similar to the Indian one, comprising the entire Indian and Pacific Oceans.

In a statement accompanying the guidelines, Foreign Minister Heiko Maas said that though the Himalayas and Malacca Straits seemed far away, “our prosperity and our geopolitical influence in the coming decades will depend…on how we work with the countries of the Indo-Pacific region.” Germany wanted to shape the world order that was emerging “so that it is based on rules and international cooperation, not on the law of the strong.”

Neither Germany nor the EU, are about to jump into the Quad and align with the US against China. German policy looks more like the one articulated by Japan and South Korea, and even India, notwithstanding our Himalayan contretemps. It essentially complements French policy which was issued two years ago and which emphasises multipolarity. Germany and France are now working towards a common EU strategy on the Indo-Pacific.

The Chinese are not without leverage in Europe. Many European giants like Volkswagen and Daimler depend on the China business for their profits. Chinese investments are welcomed not just in central and eastern Europe, but Greece, Hungary and Italy as well.

But in the current global climate, China is locked in a seemingly unending conflict with the US and public opinion in Europe is pushing its politicians to take a tougher stand against China on account of human rights.

Governments in Europe seek to use this to maximise their advantage with China and push hard on the issue of subsidies in China, as well as the bilateral investment treaty. It is in China’s own interests to complete the treaty at the earliest to counter the Trump Administration’s decoupling and containment policy against China to take hold. But at this juncture, no one really knows who or what is driving policy in China.