Xi Jinping first President to visit the country in 19 years 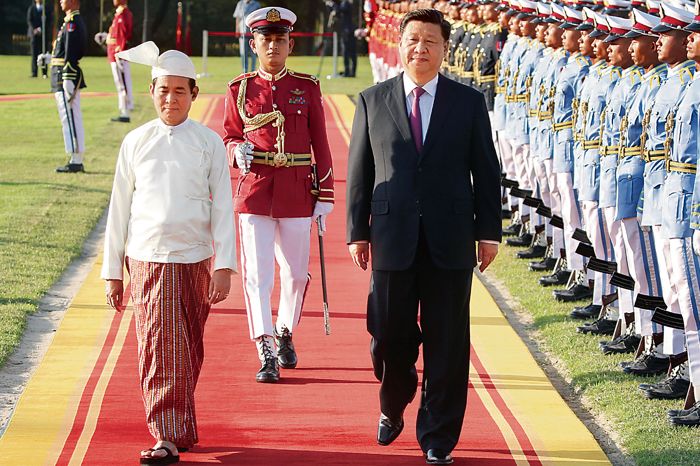 Chinese President Xi Jinping arrived in Myanmar’s capital Naypyidaw on January 18. It was the first State visit by a supreme leader of China after 19 years. Xi Jinping had meetings with Myanmar’s triumvirate — President Win Myint, Aung San Suu Kyi, and the de facto head of government, its powerful military chief, Senior General Min Aung Hlaing. The visit took place amid growing resistance by China’s maritime neighbours, Vietnam, Malaysia, Brunei, the Philippines, Taiwan and Indonesia, to Beijing’s moves to unilaterally define its maritime frontiers across the South China Sea. China has similar differences on its maritime boundaries with its northern neighbours, Japan and South Korea. China has not hesitated to use force to coerce the Philippines and Vietnam on this issue. This is despite a ruling by the International Judicial Tribunal on the Law of the Seas, rejecting Beijing’s exaggerated maritime boundary claims on the Philippines.

Xi Jinping also spent time meeting provincial leaders, primarily from areas where there are serious environmental and other concerns about Chinese projects, like the Myitsone Dam, whose construction has been halted. But, Xi Jinping’s focus remained on projects along the proposed China-Myanmar economic corridor, linking China’s Yunnan province to the Bay of Bengal Port of Kyaukphyu. As many as 33 MoUs on economic projects were signed, 13 of which were for infrastructure projects. This was in keeping with China’s policy of utilising its surplus indigenous capacities for buildings and infrastructure projects by securing the participation of its companies in infrastructure projects abroad.

The Chinese propensity to take over ports and other projects in foreign countries, if the recipient countries are unable to repay the costs incurred has raised concerns. The Myanmar government has been attempting to reduce the size and costs of large Chinese projects that could end up as white elephants. There were also discussions on agreements envisaging Chinese investments in building a transport corridor, linking the landlocked Yunnan to Kyaukphyu Port.

China is, in the meantime, interfering in Myanmar’s internal affairs by providing a safe haven, with political and armed support, to several separatist insurgent groups. China is also seeking to play the role of a mediator in negotiations between the Myanmar government and the separatist outfits. It is arming, training and financing the 23,000-strong Mandarin-speaking United Wa State Army. This group operates along China’s borders with Myanmar’s Shan. The Chinese are also allowing territory in Yunnan, bordering Myanmar and India, to provide support for a condominium of armed groups. These Myanmar-based groups, described as members of Myanmar’s ‘Northern Alliance’, also operate across the Myanmar-India border. They support groups operating in India’s Northeast, like ULFA and NSCN (K).

China’s oil supplies from the Persian Gulf are transported through the Straits of Malacca. A major concern that China has, is that India and its partners in ‘Quad’, together with Indonesia and Vietnam, could disrupt its oil supplies by closing the strategic sea lanes. There are now serious differences between China and Indonesia over maritime claims. China is also determined to counter India’s maritime capabilities by expanding the reach and size of its navy, which operates across the Indian Ocean. Its bases in Gwadar (Pakistan) and in Djibouti can also be used for expanding its Indian Ocean presence. Beijing also has ambitions to ‘persuade’ countries like Sri Lanka and the Maldives to provide naval base facilities.

Xi Jinping’s visit came at an awkward time for Suu Kyi. She had defended her government in proceedings in the world court over the alleged genocide by the Myanmar army of the Rohingya. Once an icon of the US, UK and EU, Suu Kyi is now being criticised across the western world.

Given its growing international isolation following the Rohingya refugee crisis, Myanmar had little option but to turn to China for diplomatic and financial support. India, in turn, will have to undertake a serious diplomatic initiative to create conditions for the return and rehabilitation of the Rohingya from Bangladesh to their homes in Myanmar. This effort could be facilitated by a resumption of significant economic assistance by Japan and others for the rehabilitation of an estimated 7.5 lakh Rohingya.

Myanmar has supported India consistently in dealing with insurgent groups in its Northeast. India, in turn, has acted against the separatist Arakan Army that operates from areas close to Myanmar’s Sittwe Port, which has been built by India. Interestingly, Sittwe is located not too far from the port of Kyaukphyu, which China is set to build! The BIMSTEC economic grouping, which brings together coastal and landlocked states across the Bay of Bengal, now assumes new strategic importance. BIMSTEC links countries of South Asia and Southeast Asia, who are members of either SAARC or ASEAN.

India has recently supplied Myanmar a Kilo-class submarine, modernised at Vizag. The submarine is to be deployed by Myanmar in the Andaman Sea for security operations. It symbolises the desire of both countries to ensure the safety of the sea lanes across the Bay of Bengal. It also reinforces the existing cooperation between the armies of both countries to deal with separatist and cross-border insurgencies in India’s Northeast and in Myanmar’s Kachin and Rakhine states, bordering India.