Chinese hold on Myanmar a concern for India

Connectivity through Myanmar, the centrepiece of India’s Act East policy, is hobbled by insurgencies in both countries and tardy decision-making. The India-Myanmar-Thailand trilateral is moving at a snail’s pace and requires a loop line through Mizoram to bypass insurgencies in Nagaland and Manipur. The multi-modal Kaladan project, from Sittwe port to Mizoram through Rakhine and China, has been disrupted by the Arakan Army, reportedly aided by China after it failed to block the project. 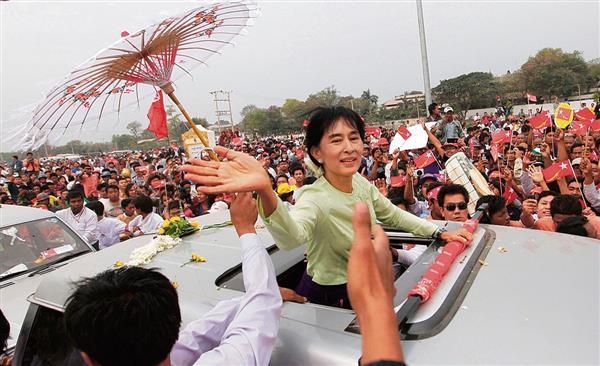 Myanmar, which is seen to be the springboard of India’s Act East policy and the third strategic frontier, held its third election last month, attracting considerable attention in New Delhi. Elections held under the military-drafted constitution of 2008 which is regarded as the roadmap to full democracy returned National League of Democracy’s (NLD) Aung San Suu Kyi to power with a landslide victory despite incumbency, sub-par economic performance, the Rohingya crisis, failed peace talks with ethnic groups, nationalistic Buddhist resurgence and the Covid pandemic.

Myanmar has a unique hybrid civil-military power-sharing system in which the Senior General calls the shots. The clash of two power centres complicates decision-making.

The National Defence and Security Council (NDSC) is the apex body controlling the three services and police. The military calls itself the guardian of the nation justifying interference in domestic politics as it has to protect the constitution, according to which 25 per cent of the seats in the central, state and regional legislatures are reserved for it. Making a constitutional change which requires a two-thirds majority in both houses is very difficult, if not impossible. Internal, defence and border affairs ministries are reserved for the junta. De facto, the military controls politics, security, economy, wealth and the Buddhist clergy.

Relations between the NLD and the military have been worsening, though Suu Kyi defended the military at the International Court of Justice against allegations of genocide against the Rohingya, thereby tarnishing her international image but boosting her domestic standing. The military faces calibrated challenges from two dozen active and dormant insurgencies.

Suu Kyi is a canny politician in a party led by elderly politicians with no second-tier leadership. The NLD has not been able to stand up to the military. The Rohingya crackdown by the army in 2017 has led to the rise of the Rakhine Rohingya Salvation Army, a new anti-state insurgency.

In April 2021, the military supremo is likely to change after a decade, but Senior General Min Aung Hlaing has said he will stay on in another civilian or military post. He has been hobnobbing with opposition parties and expressed a wish to become vice-president. If this happens, it will be the first time a C-in-C will occupy a government post which is number five in the pecking order. He is a political general, openly critical of government institutions for lack of discipline and efficiency.

Sharing a 2,100-km border, China is the Big Brother in Myanmar involved in domestic politics, development and economy, peace talks with ethnic groups and enjoying deep ties with both the NLD and the military, which is not entirely happy with Beijing’s enlarging footprint. China has said it will support Myanmar in safeguarding its legitimate rights, interests and national dignity.

Beijing’s flagship project under the BRI is the 1,700-km China-Myanmar Economic Corridor CMEC (38 projects of which nine approved) which packs infrastructure projects linking China’s Yunan province with the strategic deep sea port of Kyaukphyu in Rakhine province, which India had once eyed, that will provide access to the Bay of Bengal. Yunan, in fact, is integrated with North Myanmar up to Mandalay. The $100-billion CMEC which includes building the $8-million Yangon New City may outmatch the China-Pakistan Economic Corridor in the long run.

Myanmar is heavily indebted to China, which accounts for 70 per cent of the FDI in the energy sector alone. China holds 40 per cent of Myanmar's $5-10 billion debt. Both countries have a Comprehensive Strategic Cooperation Agreement with the new 2+2 first ever dialogue arrangement.

Still, the seeds of mistrust have grown, prompting the military to accuse China of supplying military equipment to rebel groups, including the Arakan Army in Rakhine and Chin states. In 2011, Senior General Than Shwe had turned to India for reducing dependence on China, which it finds necessary but irksome.

Connectivity through Myanmar, the centrepiece of India’s Act East policy, is hobbled by insurgencies in both countries and tardy decision-making. The India-Myanmar-Thailand trilateral is moving at a snail’s pace and requires a loop line through Mizoram to bypass insurgencies in Nagaland and Manipur. The multi-modal Kaladan project, from Sittwe port to Mizoram through Rakhine and China, has been disrupted by the Arakan Army, reportedly aided by China after it failed to block the project, including Sittwe.

The Imphal-Mandalay bus service started in April 2020 will pick up after the pandemic. India has offered to build a $6-billion petroleum refinery as investment in energy security even as it has completed 140 infra projects. India’s assistance, which is mainly in grants is $1.4 billion (and line of credit of $1.5 billion) is minuscule compared to China’s $3.5 billion, but mainly as loans. India has provided debt service relief of Myanmar’s cumulative liability of $10 billion.

With a two-million Indian diaspora as an asset, people-to-people relations and links of Buddhism need to be boosted. While playing catch-up with China is a bridge too far, increasing investment in education and agricultural sectors will be useful.

Like Pakistan, Myanmar is stuck with its generals, some of whom are being investigated for alleged genocide and will come under sanctions and, ultimately, be tried in international courts. Consequently, Myanmar’s relations with the West and the Islamic world have plummeted. There is little chance of the democracy deepening, the military submitting to civilian control and peace with ethnic insurgencies. Myanmar will suffer from status quo.

While China will remain a spoke in India’s Act East policy, it also has the potential to turn India’s two-front dilemma into two-and-a-half fronts. Defence diplomacy is India’s best card for now.