Nehru said there were two alternatives before the Congress: either to remain, as it was at present, an organisation consisting of all anti-imperialistic forces or to be a party based on certain political and economic principles. In the long run, he said, the latter course might have to be adopted; but if the Congress was dissolved now, various disruptive forces would crop up and grow, ultimately resulting in chaos. 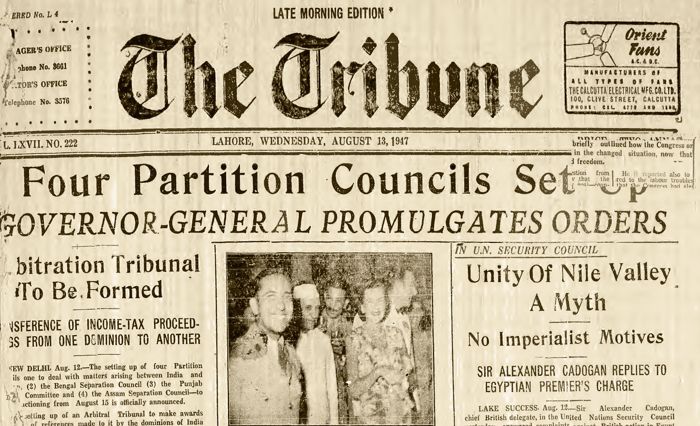 Defying odds: The Tribune continued to be published despite the disturbances. (August 13, 1947)

LAHORE, AUG 12: Monday proved to be the “blackest day” in the history of the communal “warfare” in Lahore and though Tuesday started well and it appeared that the heavy shower of rain which Lahore had this morning would keep the atmospheric and communal temperature down, yet during the day communal frenzy returned. Yesterday’s bad record was stated to be in the neighbourhood of about 80 persons stabbed, including those killed, whose number was stated to be about 40. The night, however, was peaceful because as a result of the enforcement of the curfew order from 8 p.m. on Monday to 6 a.m. on Tuesday, no incident occurred anywhere excepting in Qila Gujjar Singh, where an unsuccessful attempt was made to set fire to a house. The culprit was caught. 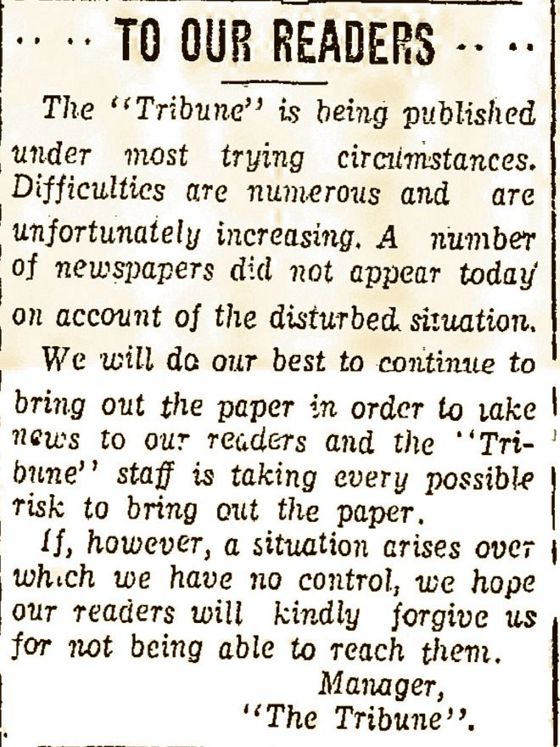 Though the day started well and it appeared that peace would continue to prevail, yet during the afternoon, the situation changed at once and grew bad. It was reported that by 3 p.m. today, there had been about 40 cases of stabbings in various parts of the city and of these about a dozen proved fatal.

According to an A.P.I. message, three persons were killed on Grand Trunk Road near Hide Market in the Faiz Bagh area this morning. Five other persons were assaulted and taken to hospital from the same locality. Three persons were fatally stabbed on Akram Road in Sultanpura, a suburban part of the city.

Twelve shops and houses were destroyed by fire in Sadar Bazar in Cantonment area early this morning. Cases of arson were also reported from Garhi Shahu, Faiz Bagh and Tezab Hata.

AMRITSAR: The situation in the city and the rural areas continued to be disturbed today. In Dab Tili Bhanna, a woman and a child were injured with bullet shots. In Lohgarh Gate, one man was shot dead in military firing. Another person was killed and two injured in firing by the military in Sultanwind. A body was recovered from a water channel outside the city.

There were several cases of arson. The curfew restrictions were relaxed for two hours in the afternoon to enable the people to purchase rations.

The meetings of the bodies shall be held: (a) Alternatively in the capital towns of the two provinces represented on that body.

(b) Under the chairmanship of the Governor of the province in which the meeting is so held. A series of meetings held in one place shall be deemed to be a single meeting.

It shall be the duty of each of the bodies: (a) To consider all questions relating to matters mentioned in Article four of the Arbitral Tribunal Order, 1947, as are the concern of that body, and attempt to reach an agreed decision on all such questions.

(b) In the event of their failure to reach an agreed decision on any such question as aforesaid, to make a reference in accordance with the provisions of the said order to the Arbitral Tribunal set up by that order.

(c) To consider any other question of common concern to the dominions of India and Pakistan or as the case may be to the respective provinces, arising in connection with the provisions of the Indian Independence Act, 1947.

ALLAHABAD: Pandit Nehru, who arrived here yesterday morning from Delhi, addressed the members of the A.I.C.C. staff in the afternoon for about 45 minutes when he is reported to have briefly outlined how the Congress organisation should function in the changed situation, now that the country had achieved freedom.

Referring to the suggesting from certain quarters that now that the Congress had achieved its goal — country’s independence — it should be dissolved, Nehru is reported to have said that there were two alternatives before the Congress: either to remain, as it was at present, an organisation consisting of all anti-imperialistic forces or to remain a party based on certain political and economic principles. In the long run, Panditji said, the latter course might have to be adopted; but if the Congress was dissolved now, various disruptive forces which were already showing signs of growth would crop up and grow further, ultimately resulting in chaos.

Nehru emphasised that the Congress organisation should maintain, as is done in western countries, an elaborate machinery to collect statistics to facilitate the work of the Government. The Congress must now serve a two-fold purpose: voice the popular will and remove misunderstandings in public minds created by interested parties.