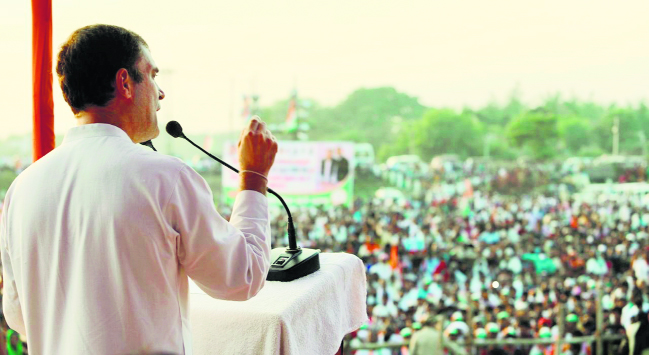 In flux: Rahul Gandhi and Sonia ought to be pilloried over organisational failures.

Aparty that won just two out of 243 seats in the Bihar elections claiming it as a victory for secular-democratic forces — and conflating it with the American elections to anoint Joe Biden, a Left-progressive leader — can only be termed as one of the worst, though hilarious, examples of political reductionism. The Bihar polls saw a dramatic consolidation of the Yadavs and Muslims on the one side, and the numerically significant non-Yadav backward castes, Mahadalits and the upper castes arrayed against them. In this election, polarised over caste and communal identities, the Congress could not make the kind of gains other allies of the Rashtriya Janata Dal made, and it is an enticing riddle that needs to be solved.

In a polity polarised over identity politics, who does the Congress represent? Its lack of appeal lies exposed.

Instead, a few have-beens from within the party have jumped at the opportunity to attack the Congress leadership — a euphemism for Rahul Gandhi. In fact, by portraying Rahul Gandhi as the sole source of all that ails the Congress, these leaders have triggered an interesting debate on the structural possibilities, responsibilities and entitlements of middle-level leaders within the organisation. The year started with a debacle for the Congress in the Delhi Assembly elections. Out of 70 seats, the party, which had not-so-long-ago won three consecutive polls, contested 66 seats and its candidates lost their deposit on 63 of them. There was no clamour for introspection because those who should have done it had already migrated to the Rajya Sabha and the rest are anyway languishing on the sidelines.

A candidate’s commitment to the constituency ought to be lifelong but unfortunately most politicians, particularly Congressmen, consider their constituencies as entitlements that they have secured through proximity to the leadership or through goods and services rendered. If they win, fine; if they lose, they move on to another constituency or to the nominated route of legislative councils or Rajya Sabha. This probably is one of the worst structural weaknesses of the Congress and a terrible legacy of its high command culture. Why should a candidate who is not good enough for Constituency A be offered Constituency B on his or her demand? Worse, why should the doors of Rajya Sabha be immediately opened for a failed candidate who has abandoned a constituency?

An election is won seat by precious seat. So, every panchayat, municipal ward, assembly segment and parliamentary seat ought to be treated with respect and fought for. To grab a party ticket for an assembly poll as part of a formidable alliance with a winning chance in itself is an achievement. And the Congress deciding to contest 70 seats in Bihar without grassroots-level activists who have nurtured their constituencies over the years is like handing over trophies to those who were not even in the race. Ticket distribution, identification of candidates and campaign details are all electoral management efforts, which need to be done by the middle-level leadership — the organisational spine, which seems to have gone missing. But all that the Congress does after the failure is to blame Rahul Gandhi. He could not have possibly stopped any leader from intensively campaigning in their chosen constituencies in Bihar, or for that matter in the Delhi Assembly polls.

In fact, Sonia and Rahul Gandhi ought to be pilloried for organisational failures, which result in the elevation of less-than-mediocre sycophants to positions of vital importance in the party hierarchy. Then, the choice for the organisational spine is between Mr Tweedledee and Mr Tweedledum, with one of them blaming the Gandhis for choosing the other. The organisation has not been restructured since Indira Gandhi created this party through several splits; and it is now badly in need of an overhaul, to make it smaller, leaner, efficient and more disciplined to reflect the realities of its real strength. In Haryana’s Baroda bypoll, one constituency where strong local leadership was allowed to choose the candidate and fight it out, the Congress handsomely defeated the BJP-JJP, yet again proving the invaluable role of satraps like the Hoodas, who clearly represent a caste group.

Apart from its dysfunctional ‘middle order’, the Bihar election exposed the party’s lack of appeal or identity. In a polity polarised over identity politics, who does the Congress represent? The bickering lawyers, who claim to be the intellectuals of the party, have not tried to understand, explain or answer this question. For instance, in Tamil Nadu or Bihar, where the Congress’ regional allies offer it a piggyback ride, it has never cared to nurture constituencies, ideas or groups. Surveys have pointed out that nearly half of the Congress’ Bihar candidates were from upper castes, and that they did not enthuse the Muslim-Yadav voters of the RJD and failed to lure the BJP’s voters. In short, the Congress fell between two stools. Worse, it has begun losing the Muslim votes too, as seen in the Seemanchal victories of Asaduddin Owaisi’s AIMIM.

In such a situation, the Congress ought to think like the small party it is. Also, it is a different entity in every state and it should not try to make its national allies its local partners. For instance, the Congress and the Left — allies in West Bengal — are the bitterest opponents in Kerala, calling each other the worst names possible. Similarly, if the Congress only appeals to the upper castes in Bihar, it has to accept the situation and work accordingly. It could have garnered more anti-incumbency votes away from the JDU-BJP combine if it had probably contested outside the Mahagathbandhan with only a seat adjustment with the RJD. But then LJP was made to play a similar trick to ensure that the disgruntled JDU votes did not accrue to the Congress.

In these times of polarised politics, the Congress should open its doors to lateral entrants and ideas representing groups and identities.