Congress must end ambiguity at the top

The Congress, the party of the freedom struggle, has failed to wage a powerful ideological struggle against the misappropriation of nationalism. It has to agree or elect a leader who can keep the Congress united, reconstruct its organisational structure across the states, and finally, project and propagate a clear alternative ideological narrative to the BJP. 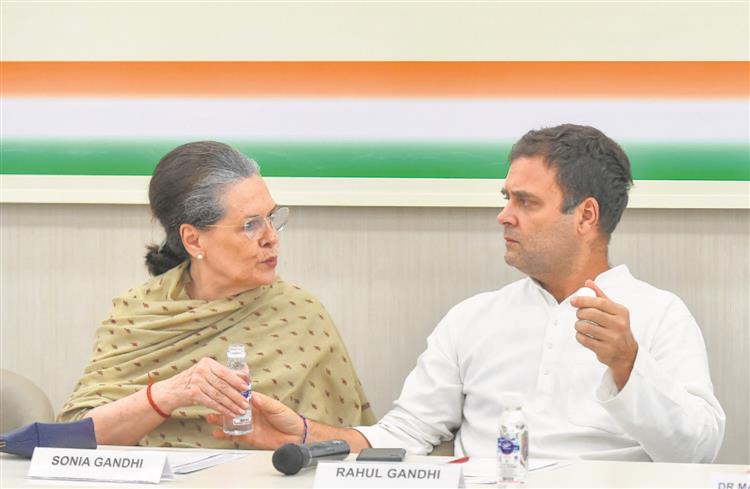 All about basics: The Congress’ revival can’t begin without a full-fledged party president and a wider decision-making process. PTI

The Congress party is no stranger to setbacks, but the crisis it has faced since the catastrophic defeat in the 2019 Lok Sabha elections is unprecedented and probably the worst in its long history. This crisis has come at a pace and scale that perhaps few in the party could’ve foreseen. Nobody in a position of authority in the Congress has offered a comprehensive explanation for the party’s debacle in 2019. Despite serious concerns regarding its survival, the central leadership has not drawn up a roadmap for revival. The abysmal performance in the Assembly elections in Bihar and byelections in 11 states further indicate that nothing was done to rejuvenate the organisation in the past 18 months.

The immediate challenge before the Congress is to resolve the leadership crisis created by Rahul Gandhi’s resignation as party president, which he relinquished against the wishes of many in the party. The party could neither persuade him to withdraw his resignation nor agree to a non-Gandhi as his successor, with Sonia Gandhi taking interim charge. The party has failed to sort out the leadership tangle which has besieged it for much too long. It has cost the party dearly with no serious attempt to stop its downward slide. Consequently, the organisational paralysis continues as also the string of poor electoral performances of the party.

What has complicated matters is the backseat driving by Rahul Gandhi, who quit as party boss but remains the de facto head. He has been setting the agenda for his dispirited party, deciding its policies and strategies, and deploying close confidantes in key positions. This has led to a growing perception that he wants to wield power without responsibility and accountability. Several leaders have expressed their disquiet with the way power is being exercised in the party with no clear lines of individual responsibility. Even if there is no dramatic change in the party’s fortunes with a ‘full-time president’, the fact is that the Congress’ revival cannot begin without a full-fledged party president and a wider decision-making process. Only that can bring clarity to the state level and to the grassroots.

Apart from the leadership crisis, the Congress is struggling with a serious organisational crisis. At the organisational level, there’s a complete collapse of the set-up which has withered away with the party lacking local leaders and workers to conduct ground-level campaigns. But this can be changed through party elections; the Congress hasn’t had them for 23 years. There is an urgent need for radical organisational reforms, beginning with the conduct of intra-party elections so that the party can begin to reorganise and deal with the dismal situation that it finds itself in. This issue was brought front and centre by 23 senior leaders who sought clarity on leadership by pointing out that ‘uncertainty’ over the leadership and the ‘drift’ in the party had demoralised workers and weakened the party. But there’s still no clarity on when elections would be held. Even the timeline for Rahul Gandhi’s return or a presidential poll within the party is deeply unclear.

It is true that Opposition parties face an unequal playing field given the Bharatiya Janata Party’s (BJP) monopoly over institutions, money power and media, but it is also true that the Congress, for its part, hasn’t offered a clear counter-narrative to take on the dominant BJP since 2014.The deficit in the Congress is not just about leadership or the lack of internal democracy; it is also a deficit of vision and ideology. The biggest challenge at this moment is to define its message and getting it across to the electorate as an underpinning for political mobilisation. The lack of clarity with regard to its ideological stand constitutes a major hindrance in the Congress recovery.

The Congress party isn’t like the BJP in organisation or ideology. Historically, it had come to power on a centrist platform reflecting its varied social base. It functioned as a loosely organised party with a loosely defined ideology which served it well in the past. Now that the ground has shifted to the Right, this fluidity is hurting the party. Without a clear ideology, the party hasn’t been able to prosecute an effective argument to counter Hindu nationalism which propelled the BJP to power. The party of the freedom struggle even failed to wage a powerful ideological struggle against the misappropriation of nationalism.

As the Congress lost ground, its leaders have swung between making ideological compromises and plotting a frontal battle against Hindutva. The contradictory pulls exerted by these divergent approaches are partly responsible for the impasse plaguing the party since its spectacular defeat in 2014. The current political conflict in the country is not about the growing prominence of Hinduism in our public life (which most political parties accept); but about the BJP’s idea of cultural nationalism, which is majoritarian, pitted against the inclusive nationalism that Congress had championed in the freedom struggle and thereafter. It is this inclusive nationalism that the Congress has failed to reclaim to counter the false conflation of Indian nationalism with Hindutva.

Just as the BJP has been unequivocal in its espousal of Hindutva, the Congress has to be equally unequivocal in articulating its philosophy of secularism, nationalism and social justice, and underline the country’s successes owing to these commitments in the previous decades. However, from 2014 onwards, the Congress is wary of an engagement with these big issues of our time mainly because the party fears losing popular support by being seen as anti-Hindu; hence, most leaders are unwilling to come out openly against majoritarianism.

Looking ahead, the Congress faces three major structural challenges in a political conjuncture defined by the shift to the Right, and the polarisation produced by it. It has to agree or elect a leader who can keep the Congress united; reconstruct its organisational structure across the states; and, finally, project and propagate a clear alternative ideological narrative to the BJP.