Democracies must find a way to address growing inequality and polarisation 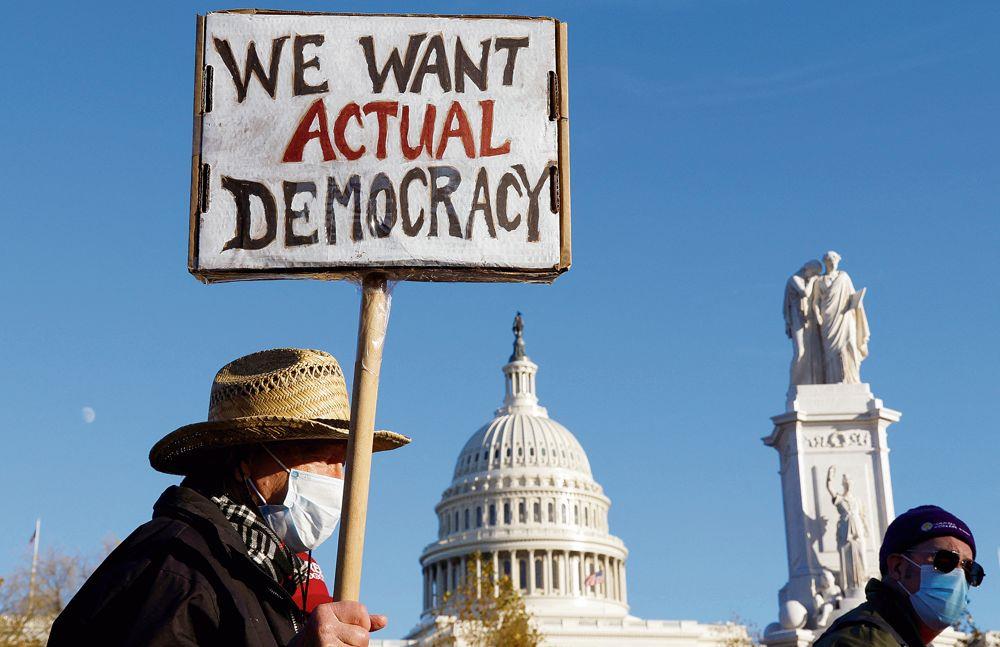 Key role: Only an empowered citizen can be a stakeholder in democracy. Reuters

The US President, Joe Biden, hosted a Summit for Democracy last week in the virtual mode. The summit will kick off a whole year of action for the promotion of democracy worldwide with a follow-up summit — in person this time — to be convened in Washington with Biden again playing the host. There is no doubt that democracy has been in decline across the world since the beginning of the current century, both in well-established democratic states as well as among latecomers and aspiring ones. It will take more than a couple of summits to address the underlying causes but the initiative is still a laudable one. It may help shift the global political narrative in support of liberal democracy.

Democracies do not always work together to promote democracy in other countries.

Democracies do not always work together to promote democracy in other countries. When the interests of any two states converge, shared democratic values may reinforce relations between them. But shared democratic values do not over-ride the pursuit of divergent interests. During the Cold War, being democratic nations did not prevent India and the US from being on opposite sides of the geopolitical fence. Shared interests may lead democracies to work even as allies of non-democratic states. In order to contain the then Soviet Union, the US was more than willing to ally itself with Communist China even when the latter was in the throes of the ultra-radical Cultural Revolution in the 1970s. India and the Soviet Union maintained a strong strategic partnership over three decades (1960-1990) despite being on opposite sides of the ideological divide. One should be mindful of the fact that for Biden, the Summit for Democracy serves as an instrument to put its main geopolitical rivals, Russia and China, on the defensive, but this is of limited utility.

The geopolitical dimension came to the fore in the inevitable controversy over which countries were to be invited and which were to be shunned. Judged by their democratic credentials, it is difficult to justify the exclusion of Bangladesh and Bhutan while Pakistan was invited. Pakistan’s geopolitical utility, particularly in managing the turbulence next door in Afghanistan, may have weighed in. But it must have been embarrassing to have Pakistan decline the invitation. Earning brownie points from long time benefactor China was more important for Islamabad than the once much valued certification from the American superpower.

The objectives of the summit were three-fold: Counter authoritarianism; addressing and fighting corruption; promoting respect for human rights.

From reports received so far, the only tangible result is the Export Controls and Human Rights Initiative, launched by the US, Australia, Denmark and Norway, which seeks to prevent authoritarian governments from misusing dual-use technologies to survey and hack into communications of political opponents, journalists, activists and minority communities. I would have expected India to be in this group, particularly after Prime Minister Modi drew the attention of the summit to the need for global norms for the use of digital technologies for social media or for cryptocurrencies which had the potential to undermine democracies. While he did not spell this out, it is a fact that digital technologies can strengthen democracy by enabling the wide diffusion of information, increasing transparency and accountability.

PM Modi said India’s message to the world was that “democracy can deliver, has delivered and will continue to deliver.” This was an uplifting message, but the fact is that over the past decade and more, democracies have been perceived as less successful than authoritarian states, communist or otherwise, in delivering the most basic services that ordinary citizens expect of the state, namely, public security, education and health. One cannot deny that across the world, the Chinese experiment under an authoritarian regime has been acknowledged as a spectacular success, lifting hundreds of millions out of poverty, creating the world’s most modern, state-of-the-art infrastructure and delivering improved standard of living to its people. That this has been achieved at the cost of pervasive violation of human rights and the degradation of its ecology is not always apparent. There is what one may term as ‘dictator envy’ or the yearning for a strong and powerful leader who could cut through all human and material barriers to deliver peace and prosperity. Like it or not, there is pessimism about democracy within democracies and this is a greater challenge to democracy rather than the machinations of authoritarian states and their leaders.

The survival of democracies needs introspection among its champions. Why have the people turned their faces away from what once seemed, self-evidently, as the best and most evolved political dispensation in human history? To my mind, at the end of the Cold War, liberals lost their way. They acquiesced in the calculated bid to equate liberal democracy with free markets, selling the dubious proposition that free markets inevitably led to democracy. The role of public policy in ensuring equity in access to basic services and to opportunities for advancement was progressively diminished while market orthodoxy increasingly took hold. A smaller and smaller cluster of winners cornered the growing cake, while the ranks of the losers expanded relentlessly. These inequalities are not the consequence of globalisation or the nature of technological change. They are the result of the failure of public policy. The democratic state has abdicated its responsibility to ensure the fair distribution of the fruits of globalisation and technological advancement. We have ended up with levels of inequality in income and wealth which are simply not compatible with democracy. Populism is rooted in this frustration with growing inequality and polarisation is inherent in such a situation. Democracies must find a way to address this growing inequality, otherwise they are unlikely to survive. Or they may morph into what are now described as electoral autocracies.

PM Modi spoke about India’s policy of inclusion. This is indeed an important feature of democracy and needs to be expanded. Only an empowered citizen can be a stakeholder in democracy.

India is the world’s largest democracy and in many ways a unique experiment in celebrating plurality within a democratic polity. Its success as a democracy may well determine the fate of democracy itself.