Covid endgame not without jabs, safeguards : The Tribune India

Covid endgame not without jabs, safeguards

We need to speed up vaccination. Two vaccines are currently available and more could be approved in future. As this happens, the availability of enough doses may become a key factor. Already some states are running dry. A Russian entity has signed deals with Indian companies for the production of the Sputnik V vaccine. Indian agencies could have tapped this spare capacity to boost production for domestic needs. 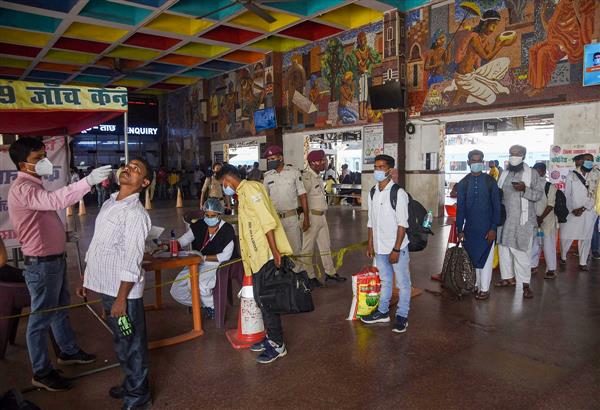 Alarming: The second wave of Covid-19 has arrived at a time when people had started celebrating the country’s success in tackling the first wave effectively. PTI

After a lull, the coronavirus has hit back. The numbers are rising in many states and the highest single day rise in new cases nationally has surpassed the peak reported in September 2020. Experts had predicted a second and possibly a third wave right at the beginning of the pandemic in 2020 because waves are a recurring theme of pandemics. The influenza pandemic of 1918 occurred in three waves spread over two years. A surge in the number of cases, with a clearly defined peak, makes a new wave. The waves may surface in different parts of the world at different times, but their duration and magnitude are highly unpredictable. The severity or lack of it in a new wave may differ vastly. For instance, the first wave of the Covid-19 pandemic in Africa was slower than in the rest of the world while the second one is turning out to be more aggressive and severe. Canada is going through a third wave, more severe than the first two.

The second wave in India came at a time when people started celebrating the country’s success in tackling the first wave effectively, resulting in a dramatic drop in numbers in the first two months of 2021. Some in the government claimed the world needs to learn from the ‘Indian model of Covid-19 management’. On March 7, 2021, Health Minister Harsh Vardhan declared that ‘we are in the endgame of the Covid-19 pandemic’. The vaccination of healthcare and frontline workers as well as the elderly also started, and it was celebrated as ‘the world’s largest immunisation programme’. Generally, there was a self-congratulatory atmosphere and a whiff of premature victory celebrations. All this, coupled with behaviour fatigue that had set in 2020, may have resulted in people developing a sense of complacency. People started travelling to the hills, beaches and other tourist destinations, throwing Covid-appropriate behaviour to the winds.

The period also coincided with assembly elections in five states and mega religious events like the Kumbh. Holding elections in time is a constitutional requirement. Many countries have done this during the pandemic, and assembly elections took place in India during the first wave. However, what differentiates the current elections is the extended period of campaigning owing to the polling schedule and the intensity in the form of mega rallies and roadshows. The Election Commission pandemic guidelines are silent on this while restricting door-to-door campaigning to groups of five persons, use of sanitisers and social distancing in polling booths etc. The Assam Health Minister refused to wear a face mask saying he did not want to spread panic by wearing one. Besides the possibility of infection spread among those physically present, mega rallies fuelled general complacency about Covid-appropriate behaviour. Citing election rallies, people are questioning pandemic management measures like capping the number of guests at weddings. Students in some universities are demanding the resumption of offline classes. The pandemic was an opportunity for the Election Commission to encourage innovative methods of campaigning and greater use of technology. In the case of the Kumbh, the Uttarakhand High Court had to intervene to make the RT-PCR test mandatory for devotees.

In addition to the laxity in public behaviour due to such factors, several biomedical and epidemiological variables are contributing to the new surge. These include the emergence of new variants and mutants, availability of pools of susceptible populations and a possible drop in immunity induced in the first wave. Sero-surveillance studies, genomic surveillance for detection of new variants and age- and gender-specific epidemiological data can help fine-tune the response to the second wave. There are gaps and a lack of transparency in this area. Recently, a member of the Covid-19 task force in Maharashtra and the Director General of CSIR got into a wrangle over delay in sharing of genome sequencing data, while being live in a television programme. To defuse the situation, the CSIR official shared his email ID with the Maharashtra doctor asking him to write to him. The lack of coordination between the Central agency and states on such a vital issue — and public display of it — after one year of pandemic management is appalling.

In addition to sero and genomic surveillance and enhanced testing, we need to speed up vaccination. Two vaccines are currently available and more could be approved in near future. The vaccination net is being gradually expanded. As this happens, the availability of enough doses may become a key factor. Already some states are running dry and stocks available in some districts are too thin. As of the morning of April 7, a total of 8.71 crore doses of the vaccines had been administered. This includes fully vaccinated people (who got two doses) and those who have received only the first dose. On the other hand, 6.45 crore vaccine doses have been ‘exported’ till April 6. The biggest chunk — 3.57 crore doses — has been exported under commercial deals signed by the Serum Institute of India (SII) and Bharat Biotech with foreign entities, while 1.81 core doses were contracted under the Covax facility of the WHO. The remaining 1.05 crore doses have been distributed as grants by the Indian government. So, even if there was no ‘Vaccine Maitri’, only one crore additional doses would have been available for the domestic programme.

A Russian entity, the Russian Direct Investment Fund, has signed deals with Indian companies (other than SII and Bharat Biotech) for the supply of close to one billion doses of the Sputnik V vaccine. Shockingly, Indian agencies couldn’t tap this spare capacity or encourage Bharat Biotech and SII to enter into local contract manufacturing deals to boost production for domestic needs. This is despite the government allocating Rs 900 crore as a stimulus package to the Department of Biotechnology for vaccine development. The fund could have been used to boost the capacities of Bharat Biotech and SII as well as to buy spare capacities from other manufacturers. This is critical because the rapid rollout of vaccination and Covid-appropriate behaviour are the only ways to address pandemic waves.