While it may take years for the US to recover, China set to establish dominance 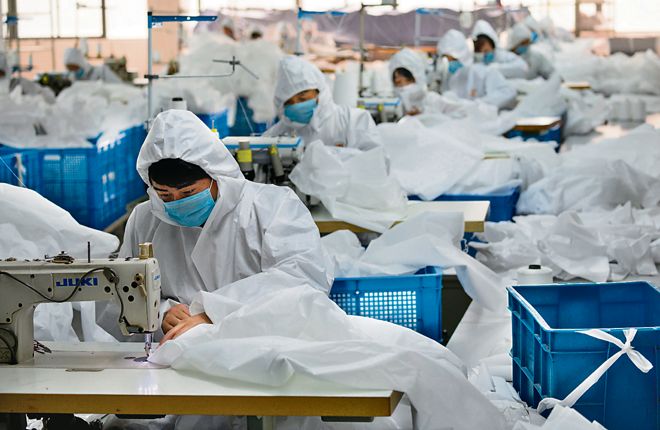 In control: China is flying in ‘relief supplies’ across the world even as the US looks on.

As the coronavirus poses a serious threat to humankind, one can be gratified at some of the efforts for globalising the quest for a cooperative remedy. This situation has also to be analysed as one looks at China’s present outreach to cooperate with countries ranging from Italy and Spain on the one hand and to Cyprus and Pakistan on the other. China, whose actions triggered this crisis, appears ready to provide what every country now desperately needs, particularly by way of equipment and machinery. While China’s industrial progress since the 1980s has been path-breaking, there have been complaints about medical and other equipment it has supplied recently, which it will have to address quickly to maintain its credibility as a reliable supplier of sophisticated machinery, equipment and know-how.

The Chinese refusal to accept responsibility for the impact of what transpired in Wuhan is unfortunate, and for many, unpardonable. In response to US queries and requests for samples of relevant material from Wuhan, China claimed that it had ‘no clear evidence of human-to-human transmission’. It denied US experts access to Wuhan. President Trump has faced considerable criticism that he was ‘taken for a ride’ by the Chinese, who stalled US efforts to ascertain full facts. Wuhan is the hub of China’s industrial, technological and educational development. It is also a major centre internationally for educational and technological development. The tragedy that the world faces today is widely and almost universally accepted as having emerged from the wholesale seafood market in Wuhan.

The Trump administration has been outraged by the absence of Chinese actions to immediately bring these developments to the notice of the world. Around 38,000 US citizens and residents were flown back from China to major American cities like New York, Los Angeles, Chicago and San Francisco, in the weeks following the Wuhan shutdown. This was inexplicably done without comprehensive medical checks of passengers. The tragedy that has befallen Americans, as their cities are ravaged and thousands have died, is the direct outcome of these developments. China, now confident that it will emerge as the unquestioned No. 1 power in the world, is in no mood to express any regrets to the US, or to the world at large. While it could take years for the US to recover fully, China appears determined to establish its dominance globally. It is challenging US power by flying in ‘relief supplies’ across the world as the US looks on. Not surprisingly, Putin’s Russia, which shares a long common border with China, has acted quietly, clinically and decisively to deal with the issue.

With Trump and his political associates going ballistic over what is unquestionably Chinese responsibility and culpability in handling the Wuhan crisis, relations between the two foremost powers have sunk to a new low. Moreover, Trump has echoed misgivings, shared widely, about the role of the Director General of the WHO, who is accused of not only being ineffective but also is regarded as a virtual apologist for China. The US has threatened to end all funding for the WHO, which would render the organisation dysfunctional. Rather than showing understanding and promoting cooperation, the US and China appeared determined to confront each other. India is, however, playing its cards carefully — indeed skillfully — to avoid getting drawn into the vortex of Sino-American rivalry. At the same time, an outraged Indian media is focusing on the blatant Chinese efforts to disclaim responsibility.

China also appears to have concluded that it should not get into a position of totally alienating India and Indian public opinion. Following a tele-conversation with the otherwise none-too-friendly Chinese foreign minister, Wang Yi, External Affairs Minister Jaishankar made it clear that India was not in the business of pointing fingers at China. Jaishankar merely noted that following his discussions with Wang Yi, both sides had agreed to work together to combat the Covid. China and India also indicated that they were ready to cooperate in the G20 Summit convened by Saudi Arabia.

The readiness to work together with China evidently had an impact on China’s approach to deal with Pakistani attempts to raise the Kashmir issue in the UNSC late last month. China, which was then the president of the UNSC, turned down a request from Pakistan for ‘urgent and appropriate action’ on developments in J&K. Islamabad claimed these developments posed ‘a threat to international peace and security’. This was a departure from Chinese policies in the recent past on the issue. It would, however, be premature and a serious mistake to presume what direction China’s policies will take in coming months.

Just over a century ago, an estimated 18 million Indians perished in a global pandemic, where an estimated 50 million perished globally. India was then under British rule. India today has a democratically elected government in a federal democratic system, which is responsive to public needs. The world has never been as interconnected as it is today. We will, therefore, naturally find a way forward. But, in the meantime, it is heartening that PM Modi and his government are constantly monitoring developments and reviewing their policies, after extensive consultations with state Chief Ministers. Given this welcome trend, one looks forward to India emerging from the crisis, with its federal institutions and structures significantly strengthened.