The high fatalities due to the pandemic mirror the areas that are inhabited by low-income groups. The recent intra-borough gentrification patterns facilitated by official urban planning provide a cue. The gentrification is a migration of poorer communities to other areas and they are substituted by a more homogenous group, generally richer and white. 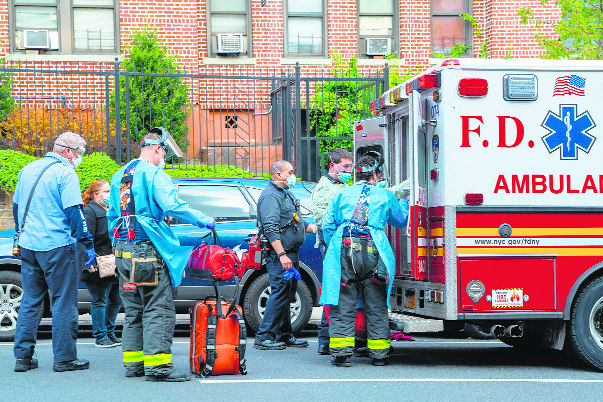 Vulnerable: New York City has emerged as the global epicentre of the war against Covid-19 with all its five boroughs impacted.

With over 15,000 fatalities, New York City, the financial centre of the United States of America, has emerged as the global epicentre of the war against Covid-19 with all five boroughs impacted. Brooklyn and Queens have reported over 3,900 deaths each so far, followed by the Bronx (at least 2,800) and Manhattan (about 1,700). The smallest borough, Staten Island, has witnessed around 600 deaths.

The vulnerability of the city is attributed to the high inflow of travellers and its high density in relative terms. However, these facts hide other vulnerabilities. The high fatalities due to the pandemic mirror the areas that are inhabited by low income groups. In this context, in order to comprehend the health crisis more closely within the boroughs, the recent intra-borough gentrification patterns facilitated by official urban planning provide a cue. The gentrification, as colloquially internalised by New Yorkers, is a migration of poorer communities to other areas and they are substituted by a more homogenous, i.e. generally richer and white groups. Or the upper middle class professional immigrant workforce comes to reside in these areas. The old inhabitants either sell their apartments or get evicted or just can not pay the rising rent. Facing this reality, in 2013, Mayor Bill de Blasio’s campaign pitch was that he would reverse the policies of his predecessor, Mayor Bloomberg, that have made the city epitomise the tale of two cities.

Mayor Bloomberg’s tenure as Mayor from 2002 to 2013 was marked by technocratic solutions. His ban on smoking in public spaces and curbs on calorie-rich soda drinks were lauded. His economics was trickle down. In short, facilitate wealth creation and this will provide public financing to spruce up the city. Bloomberg incentivised the growth of the tech industry in the city. This attracted another set of professionals, other than finance and lawyers, the traditional professional class of the city. As Manhattan had reached saturation limits, the impact was felt in areas near the waterfront of the Brooklyn and Queens boroughs. The gentrification was a windfall for some in Brooklyn.

For instance, Williamsburg, which was a waterfront area known for warehouses and habitat for unskilled first-generation Polish immigrants, was a classic example of this change. To give a contextual example of my first-generation Polish-American landlady, now in her early 70s: In the late 1980s, she bought a six-unit apartment building in Williamsburg for $40,000 and reportedly sold the same building for close to $2.7 million in 2016.

Bloomberg’s policies, rooted in private-public partnership, reclaimed wasteland near the waterfront in various boroughs. In the Manhattan borough, High Line Park, which is now a major tourist attraction, and Brooklyn Bridge Park in Northern Brooklyn, another tourist attraction, were some of the other waterfront projects. Notwithstanding various policy initiatives to tackle homelessness and making early education accessible to all, the present Mayor reinforced some of the previous public policy trends.

A water ferry service in 2017 linking the waterfront areas of Queens and Brooklyn with Manhattan was started and the tickets were subsidised. The main beneficiaries were the residents living in private condominiums on the waterfront. A proposed $2.5 billion streetcar system, a project that would connect Queens’ waterfront with Brooklyn’s waterfront, is another city project that bypasses the low-income groups of Queens as well as Brooklyn.

The residents along the waterfront were relatively less impacted due to the pandemic. In the increasingly digitised economy, they could adhere to the stay-at-home guidance. In fact, even before the pandemic, there is a certain class of people, such as software developers, who can work from home. However, the gentrification of Brooklyn left out the outer parts of the borough.

The hard-hit areas in the pandemic are East Brooklyn, inhabited by African-American population, and then a few areas of Bushwick, inhabited by immigrants who came from the Dominican Republic, Ecuador, Puerto Rico and Mexico. Most of the residents here are daily workers and work as delivery persons for various online delivery apps.

The same is true for Queens. Long Island city in Queens, on the waterfront, saw a rapid growth in construction of private housing condominiums and the same place was bidding to be Amazon’s second headquarters.

Areas in inner and outer Queens, namely Jackson Heights and Elmhurst, were one of the worst hit. The population here consists of immigrants from Central American countries such as Dominican Republic, Ecuador, Colombia and South Asian countries, mostly from Bangladesh and Nepal. The apartments are small in size with many family members, in some cases, three generations, cramped in small-sized one or two-bedroom apartments.

A lack of proper health insurance and co-morbidities proved to be the death knell during the pandemic. They depend on public and safety net hospitals, which proved to be inadequate during the pandemic. A New York-based non-profit association for neighbourhood and housing developments noted that “at least 18 hospitals have closed all of their inpatient services in New York City since 1998 — leading to the loss of thousands of hospital beds — with two-thirds of those closures occurring in the outer boroughs.” The non-profit adds that the “Bloomberg era saw a pattern of high-profile re-zonings of both public and private land to facilitate luxury residential development, with few if any public benefits secured in exchange for the enormous value these conversions provided to private real estate developers.”

In a post-pandemic world, the city’s honest appraisal on why some areas and races were impacted more would provide adequate relevant lessons to other densely populated global cities, situated in varying contexts, to formulate policies to ensure that equity is not only in policy but also in practice.