Delhi votes for peace, prosperity and good governance, against polarisation 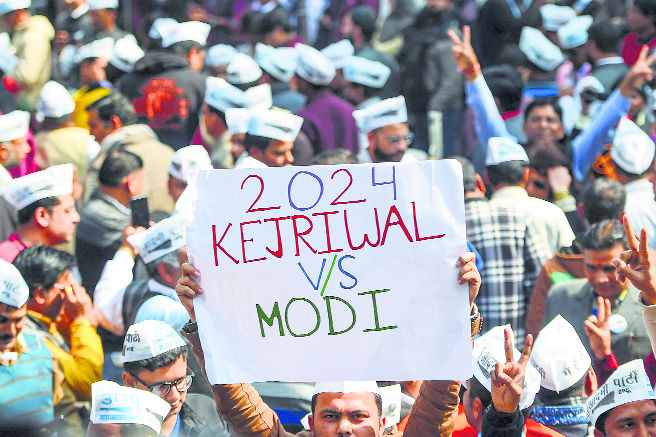 It is not common for political predictions to come true. In fact, this column last fortnight ended more in hope than certainty, and it is joyous to note that Delhi’s voters have indeed cured a dangerous madness, however temporary it was. This cure, this complete rout of the politics of religious polarisation in the national Capital, has a great message for the rest of India. As a nation, we are on the edge of a precipice, staring at an abyss from which it may be impossible to claw back into normalcy. So, just as Delhi has emphatically voted out the phantom of hatred, the nation as a whole has a responsibility to save itself from falling into a dark, demented dungeon of civil strife.

Any analysis of the Delhi elections ought to begin with the losers, not the winner, because this was not a normal campaign, nor is this a normal poll outcome. The BJP is the biggest loser because its campaign ended in a landslide win for the AAP. With its high-pitched campaign using the Citizenship Amendment Act, Population Register for Citizens and Shaheen Bagh as its only political platform, the BJP forced a complete polarisation of votes on these issues. And Delhi voted against the BJP, proving that hatred for Muslims cannot become a political platform. This is a positive vote in favour of a composite Gandhian Republic, which believes it is its responsibility to protect minorities and to ensure that their citizenship is not questioned simply because of the sins of fellow Muslims, who had committed atrocities against Hindus in Pakistan, Afghanistan or Bangladesh.

If the BJP had not pushed the entire electorate into a corner over the CAA-NRC debate, it may have done much better. After all, the BJP had won 56% votes in Delhi in the May 2019 Lok Sabha polls and to lose nearly 18% votes in just nine months is not a simple electoral drubbing. The biggest change that has happened since the May polls is the anti-Muslim rhetoric over CAA-NRC. The BJP saw in the Shaheen Bagh protest an opportunity to play the Hindu victim card, talking about the rape and murder of Hindu women, and shouting the slogan of ‘shoot the traitors’. It is indeed reassuring and refreshing to learn that the Delhi voters did not buy these claims or slogans and that they instead refused to even let their votes get split. The BJP’s campaign forced all fence-sitters and anti-incumbency voters to queue up and vote against the BJP, forgetting their apathy for the AAP or Chief Minister Arvind Kejriwal.

That is the only reason for the complete shift of the Congress votes towards the AAP. In May 2019, the Congress was the second largest party in Delhi with 22.5% votes, with an advantage of about 4% votes over the AAP. Now, the Congress has been reduced to just 4% and the AAP has surged ahead with over 53% votes. The AAP has to be grateful to the BJP for this achievement. Had the BJP not polarised the campaign so badly, the anti-incumbent, anti-BJP votes would have gone to the Congress, creating a three-way split in Delhi, probably even helping the BJP gain much more. Hence, the prime loser has a lot to explain for creating this bipolar situation in Delhi. The BJP has lost four other elections in the recent past in bipolar contests — Rajasthan, Madhya Pradesh, Chhattisgarh and Jharkhand — and could not form a government in Maharashtra. Bipolar political contests are tough for a national incumbent, which has nothing to boast about creating jobs or turning the economy around.

While the strategists of the BJP failed miserably by creating a bipolar situation in Delhi, the Congress, consciously or otherwise, ensured that it did not split the anti-BJP votes. The Congress has been drifting from one election to another, so it could be an overestimation of the Congress’ abilities to strategise Delhi polls to conclude that it willingly stepped aside and helped the AAP win the polls. If that is the case, then it was a masterstroke. Even otherwise, nothing prevents the Congress from taking credit for not splitting the votes. In fact, the last Lok Sabha polls have proved that it is not difficult for the Congress to bounce back from a vote share of less than 10% to 22.5% simply by biding its time, waiting for the electorate to get angry and turn against the incumbent.

Now, Arvind Kejriwal’s stupendous victory is more a vote for peace, amity, prosperity and good governance than for his brand of anti-ideological, opportunistic, personality-oriented politics. Kejriwal had indeed proved that he could deliver on his promises, be it cheap electricity or efficient water supply, and also administer better the schools and hospitals for the poor. Yet, it is not just the poor who have voted for him, entire Delhi has. All those who do not normally benefit from Kejriwal’s doles in New Delhi, South Delhi or the upper middle class colonies of East, West and North Delhi have also voted for Kejriwal, proving that this is the electoral translation of the sentiments of the Hindu protesters who hit the streets against CAA-NRC and the politics of hatred.

Hindus are not in danger and they do not want to fall for the politics of victimhood obfuscating all other pressing issues and even turning the borders volatile and friendly neighbours like Bangladesh inimical. The seamless electoral bonding between the Shaheen Bagh protesters and lower middle class Hindu voters could happen in Delhi only because the Hindus know that the Muslim women who wrap themselves in the National Flag and carry the portraits of Gandhi, Bhagat Singh and Chandrashekhar Azad cannot be enemies or traitors. This is the first dramatic electoral victory in recent times against identity politics — be it of the minority or the majority kind. And it is something to cherish, savour and look forward to elsewhere.