In 2004, the J&K Legislative Assembly passed a Bill to deprive women married outside the erstwhile state of retaining the Permanent Resident Certificate. Without being explicit, the main fear was the possible demographic change to the Muslim-majority character of J&K as the perception was that the bulk of the marriages outside were of non-Muslim women. 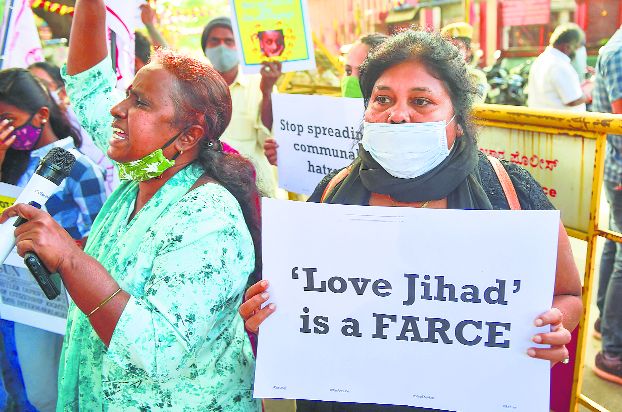 Worrying: The ‘love jihad’ laws are an assault on a person’s rights & privacy. PTI

The passage of legislation in some states to apparently protect women belonging to the majority community, also known as laws to prevent ‘love jihad’, has evoked concerns regarding the assault on individual constitutional rights and privacy, particularly the impact on women. The Uttar Pradesh Cabinet had cleared the Prohibition of Unlawful Conversion of Religion Ordinance, 2020, whereas on December 29, the Madhya Pradesh Cabinet approved the Freedom of Religion Bill, 2020, as an ordinance.

These developments fit into the regional pattern of attempts in an environment of paranoia about demographic change and patriarchy.

In Buddhist-majority Myanmar, the parliament adopted four laws in 2015 — the Monogamy Law, Religious Conversion Law and Interfaith Marriage Law, and Population Control Law. In 2012, a case of sexual violence and murder of a Rakhine Buddhist woman sparked communal violence in Sitwe, central Rakhine, that led to an internal displacement of both communities, including 1,20,000 Rohingya. Islamophobia swept Myanmar consequently.

Taking advantage of the religious polarisation, a group of monks formed the Association for the Protection of Race and Religion. They drafted and proposed to the parliament a Bill to protect the Buddhist women who married non-Buddhist men so that they have equal rights in marriage, divorce, inheritance and children as well as have effective protection. With some tweaks, the Myanmar Buddhist Women’s Special Marriage Bill was introduced by the ruling Union Solidarity and Development Party in the parliament. The Buddhist Women’s Special Marriage and Succession Act, 1954 was revoked on the passage of this Bill. Under the 1954 law, when a Buddhist woman married a non-Buddhist man, all rights and disputes regarding the marriage were governed by the Burmese customary law, which also governs Buddhist marriages.

The 2015 Conversion Law and Interfaith Marriage Law was passed by a vote of 524 to 44, with eight abstentions, by the two Houses of Parliament sitting in a joint session. The rationale given was similar to that of the Special Marriage Act, 1954, which was meant to protect women of the religious majority. As per the Bill, “whenever a non-Buddhist man and a Buddhist woman intend to contract a marriage, one of them shall apply in writing in the prescribed form to the Registrar within the jurisdiction where one of them is residing.” The law allowed local registrars to publicly post marriage applications for 14 days to determine whether there are any objections to the unions.

The law was called out for promoting patriarchy and invading privacy as it exposed the potential couple to harassment. The present ruling National League for Democracy (NLD) leader Aung San Suu Kyi, who had married a British, opposed the legislation as an opposition leader. However, her party after taking over the reign of government in March 2016, didn’t revoke the legislation. Suu Kyi was herself married to a British and was denied the presidentship. This was owing to a constitutional provision which says that the president must be someone who “he himself, one of the parents, the spouse, one of the legitimate children or their spouses not owe allegiance to a foreign power, not be subject of a foreign power or citizen of a foreign country.”

Similar underlying fears of demographic change have dictated past legislative processes. In 2004, the J&K Legislative Assembly passed a Bill to deprive women married outside the erstwhile state of retaining the Permanent Resident Certificate (PRC). A critical aspect of Article 370 was the provision of PRC given to people whose ancestors had lived in J&K for at least 10 years before May 14, 1954. Before August 5, 2019, only those with PRC could buy property, get employment in the state, vote in the J&K Legislative Assembly and were entitled to other privileges. That is why legislation was passed to disincentivise women from marrying outside.

Without being explicit, the main fear was the possible demographic change to the Muslim-majority character of J&K as the perception was that the bulk of the marriages outside were of non-Muslim women. And this would imply that the retention of PRC by non-Muslim women would result in claims of their children as well.

The Bill was meant to give a legislative form by the People's Democratic Party (PDP)-Congress ruling coalition to the 1968 executive order which was struck down by the J&K High Court on October 7, 2002. The court had held that no legislation can be made which is against gender equality.

After an uproar among women’s rights groups and criticism by opposition parties like the BJP, the Congress realised that the legislation could become a national embarrassment as it will be accused of being a partner in facilitating gender inequality. The Congress legislators in the council were asked to oppose the Bill and demand that the Bill be sent to a select committee of the J&K Legislative Council.

The council met on March 11, 2004. The Congress and BJP opposed the Bill, whereas regional parties like the National Conference and the PDP supported its passage. The six-and-a half-hour proceedings were nationally televised. After several passionate speeches by the legislators, both for and against the Bill, council Chairman Abdul Rashid Dar, in a surprise move, adjourned the council sine die.

Coming to the present debate, in India’s case, inter-religious marriage can be solemnised through the Special Marriage Act, 1954. The so-called ‘love jihad’ legislations in various states invade privacy, and, rather than reform and make it more in conformity with the democratic and liberal ethos of the 21st century, the provisions are further reinforcing patriarchy and the same paranoia of demographic change that is not too uncommon regionally.