Reviving the economy and rebuilding relations with India are Deuba’s priorities. India had painstakingly won over arch-foe Oli and till the Supreme Court verdict, was counting on his survival. Keeping China out is a top priority for India, and Oli, once a Chinese favourite, was seen as the right person for keeping Nepal out of the Chinese orbit. 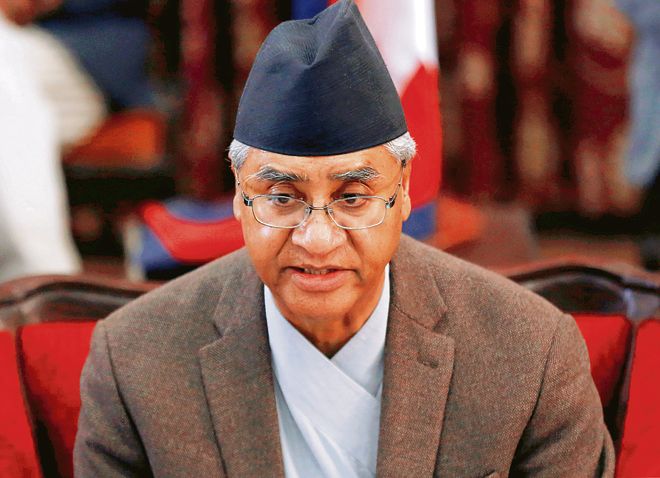 Again at the helm: Deuba is expected to bring political stability in Nepal. Reuters

PEOPLE I met in Baitadi, far-west Nepal, the area from where Sher Bahadur Deuba comes, told me in the Nepali equivalent that he was born with a silver spoon in his mouth. At 75, he has become the Prime Minister of Nepal for the fifth time, a record he shares with Surya Bahadur Thapa and Girija Prasad Koirala. This time, the Supreme Court not only ordered his appointment as PM, but also decreed that those who signed up for him on May 21 under Article 76(5) would be exempt from their party whip.

Instead of the 149 signatures that Deuba obtained, he got 165 trust votes, making him look good. From Pokhara in Nepal, a friend quoted a song from the Hindi film CID, ‘Kahin pe nigahein, kahin pe nishana’, explaining that Deuba is PM by default, resulting from the blood, sweat and toil of Prachanda who was locked in a power struggle with KP Oli for three-and-a-half years. The beneficiary of the duel was Deuba, thanks to the Supreme Court. Oli skipped Deuba’s swearing-in, while President Bidya Devi Bhandari exited the ceremony prematurely without congratulating Deuba.

Deuba has spent time in jail and also remained under house arrest. Under him, the Nepali Congress has split into three factions and he leads a party where loyalists like Bimalendra Nidhi are challenging him for its presidency in September. In October 2002, Deuba was dismissed by King Gyanendra for incompetence as he failed to conduct elections owing to Maoist insurgency. An Indian General was invited to Kathmandu to make a presentation in Baluwatar (Nepal PM’s official residence) on how elections were held regularly in J&K despite insurgency and cross-border terrorism. Deuba was about to declare unilateral ceasefire and invite Maoists for talks when he was fired. He will now conduct an election in 2023 without the fear of marching orders or any threat to his government as it is insulated because a no-confidence motion is barred for two years. For a change, Deuba’s stars are shining bright.

Deuba has so far appointed only four cabinet ministers, two each from NC (Home & Law, Justice) and Maoist Centre (Finance & Power, Energy). The Constitution restricts the government to 21 cabinet ministers and four ministers of state. He has to distribute the loaves of office to Janata Samajwadi Party (Upendra Yadav) who has sought seven ministers and one MoS while the Mahantha Thakur faction of JSP, which voted for Deuba at the last minute, and 22 lawmakers from the Madhav Nepal group who voted defying the party whip, are also ministerial aspirants. The Nepal group has been unable to work out a plan that ensures they do not lose their lawmaker status in CPN (UML) by crossing over to Deuba. He is waiting for this imbroglio to be resolved. After three-and-a-half years of instability, an alliance government promises hope.

For Oli, the grand irony is that he commanded a two-thirds majority in Parliament, simple majority in the Upper House, ran six of seven provincial governments and enjoyed a majority in the local bodies. This unprecedented electoral trust was squandered due to Oli’s arrogance, ego, governance deficit and corruption, catalysed by the power struggle. Oli’s descent from Baluwatar to Balakot (his private residence) was unexpected. Deuba is familiar with the geography of Baluwatar. His primary mission is to get hands on the Covid pandemic which has been exacerbated by a shortage of vaccines and corruption in acquisition of medical equipment. India had promised additional vaccines (already given separately to the Nepal Army twice), but is unable to oblige. Of Nepal’s 30 million population, 72 per cent require vaccination which means 44 million doses.

Bhandari has written to several heads of state urging for vaccines. Nepal was to get 10 million doses from China and the US. At present, 2.5 per cent have got two doses and 46 per cent, one dose.

Reviving the economy and resetting relations with India are Deuba’s priorities. Maoist Janardhan Sharma, famous for the Maoist debacle at the Battle of Khara in 2005, is the new Finance Minister, replete with grit but without any background in economics. Prime Minister Modi took some time to congratulate Deuba, but he did it heartily. When Oli was elected the PM first time, Sushma Swaraj reached Kathmandu to congratulate him. But it took the 1st Amendment to the Constitution for Oli to be invited to India on a state visit. Lately, India had painstakingly won over arch-foe Oli and till the Supreme Court verdict, was counting on his survival. Keeping China out is a top priority for India, and Oli, once a Chinese favourite, was seen as the right person for keeping Nepal out of Chinese orbit. During the Oli-masterminded cartographic aggression that included the disputed Kalapani, 274 of the 275 lawmakers voted for it. The new map is incorporated in Nepal’s coat of arms and backed by the Constitution.

In the guise of China South Asian Countries Poverty Alleviation and Cooperation Development Centre to commemorate 100 years of Chinese Communist Party, Beijing gathered ambassadors of all South Asian countries except India, Bhutan and the Maldives to bypass the moribund SAARC.

Thanks to Oli, China lost an excellent opportunity to displace India as the main influencer in Nepal. Still, the Global Times optimistically ran an article titled, ‘China-Nepal ties solid despite new pro-India Prime Minister’. New Delhi has a fresh and overt chance of cementing state-to-state relations through smarter diplomacy and timely, qualitative delivery of projects, as for a change it has been doing lately and strengthening people-to-people relations. This time, India must get it right.