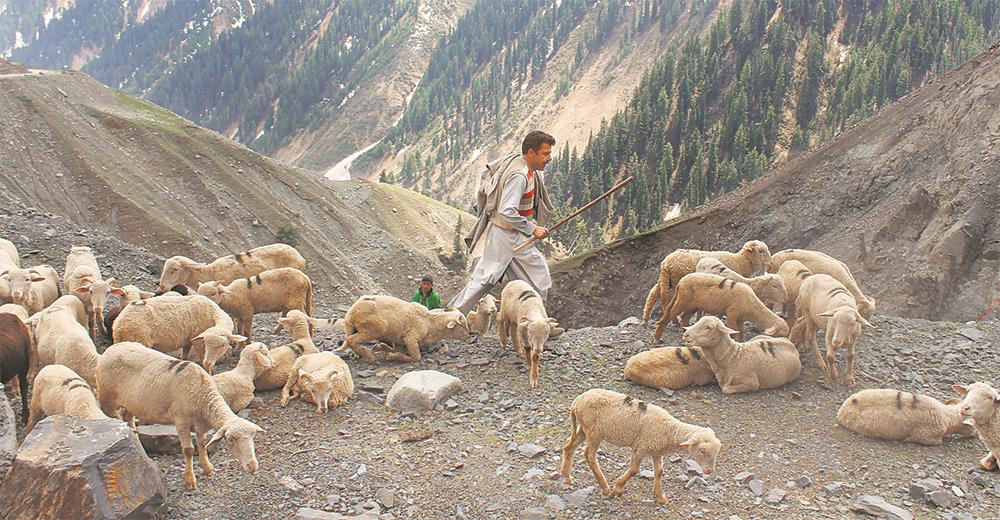 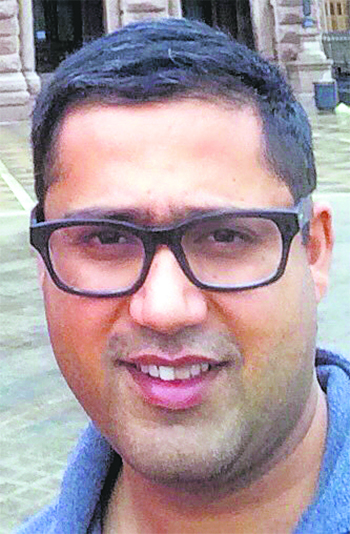 Mukhtar, a 21-year-old nomad of the Bakerwal community, has, along with his parents and four brothers, just completed the seasonal migration trek from the picturesque South Kashmir’s Kokernag area, at over 6,000 feet from sea level, to the Ramnagar Wildlife Sanctuary, adjacent to the Jammu plains, which is nearly 1,000 feet above sea level.

Mukhtar and his clan members are worried that their flock of 80 sheep and goats would not have sufficient supply of fodder for the next four months. The Ramnagar forest area, located on the Jammu-Srinagar highway, which was once the hunting ground of the monarchs that ruled J&K, is at present devoid of lush-green leaves because of the unexpected precipitation, which included three bouts of hail in the third week of October this year.

The rains were reported as a result of a unique weather phenomenon that developed over north-west India due to a low-pressure area created in the Bay of Bengal. The unexpected weather coincided with the much-publicised negotiations on climate change at the 26th United Nations Conference of Parties (COP) in Glasgow, Scotland, held from October 31 to November 12.

In the negotiations, India, which is the third largest carbon emitter, after the US and China, promised that it would ensure that 50 per cent of its energy is sourced from renewable energy sources by 2030. It also announced that it would reduce its carbon emissions until 2030 by a billion tonnes. It also committed to net-zero emissions latest by 2070.

At present, the debate on the effects of global climate change is monopolised by the narrative that rising sea levels will drown the coastal cities and island countries. On October 17, 2009, Maldivian President Mohammad Nasheed held the world’s first underwater cabinet meeting to draw attention over the rising sea levels that threaten the island country’s existence. Within India, coastal cities like Mumbai are also under the spotlight. Coastal regional countries like Bangladesh and Myanmar are also considered vulnerable due to the effects of climate change.

Like other global problems, the consequences of climate change are often limited by the global north’s interests and understanding. It, thus, eclipses the granular and multi-dimensional reality in the global south which is outside the immediate purview and scope of funding by the global north.

For instance, the effects of climate change on the nomadic communities, such as the Bakerwals, whose population is at least 5 lakh in north India — an approximate extrapolation from the 2011 Census — and, perhaps, the same number in the neighbouring Pakistan, find little mention in the discussions on climate change. At present, the community finds itself in the middle of a multi-dimensional adversarial situation — triggered by climate change and other global events — that is going unnoticed.

The unexpected precipitation this October in parts of north India, including the several feet of snow in the Pir Panjal mountains that divide the Kashmir province from Jammu, coincided with the seasonal march of the Bakerwal community to the low-lying areas. This journey has defined their way of living for centuries. Around the same time, Mukhtar’s family was caught in the snow when they reached Nathatop, at a height of over 6,500 feet in the Patnitop-Sanasar belt of J&K’s Ramban district. Nineteen of their goats, who are less acclimatised to the cold weather as compared to sheep, couldn’t cope with the cold. The veterinary hospital was far off and the goats died.

The trail of bad luck chased Mukhtar’s family as they reached the Ramnagar forest area, their destination point for the winter season. As per their initial assessment, the fodder for Bakerwal’s sheep and goat will last just a month. The family is getting nervous as the available grazing areas in their winter abode have shrunk due to urbanisation. The unregulated use of the forest area for building dwellings has also led to a rise in wild animal-man encounters. Across the valley, particularly in South Kashmir, attacks by bears have gone up, leading to several human fatalities. The same is the case in the winter capital of Jammu city as on April 6 this year, a leopard was sighted in the posh Gandhi Nagar area. Two persons were critically injured.

Earlier, the Bakerwals, who lived in the nearby forests, acted as a human wall to such attacks by wild predators in urban congested settlements. Their dogs are capable of deterring the leopards to some extent.

Coupled with the effects of climate change, Covid-19 has left the community devastated. Covid-19 has depressed the global price of raw wool from countries like India in contrast to the available processed wool from Australia and New Zealand. Apart from selling goat and sheep for mutton, the sheared sheep raw wool yielded an additional source of income to the Bakerwals. In normal times, the sheared high-quality raw wool fetched them around Rs 90 per kg and one of the destination points was Ludhiana, one of the heartlands of South Asia’s export-oriented woollen industry. The shearing of wool is done thrice a year.

One of the sources of wool procurements was the J&K Wool Board, which was shut down in March 2021. The reasons are obvious. The board was established as a derivative of the comprehensive legislation (J&K Sheep and Sheep Products Development Board Act, 1979) to procure wool from the Bakerwals and sell it in the market. In the absence of cutting-edge technology that can add value to the raw wool, the wool board lost out to processed wool from countries like Australia and was faced with surpluses in its own storage facilities from earlier unsold raw wool stocks.0000

Unsurprisingly, the Bakerwals have no option except to sell the raw wool to private middlemen at a low price of Rs 20 per kg for high-quality raw wool.

The situation of the Bakerwals only reinforces the point that the understanding of the effects of climate change on human population requires a framework that is customised to the local realities in the global south. Only then would the fuller scale of the effects of climate change on communities in the global south, living away from public glare, and an understanding of the global north be known more comprehensively, prominently and accurately.