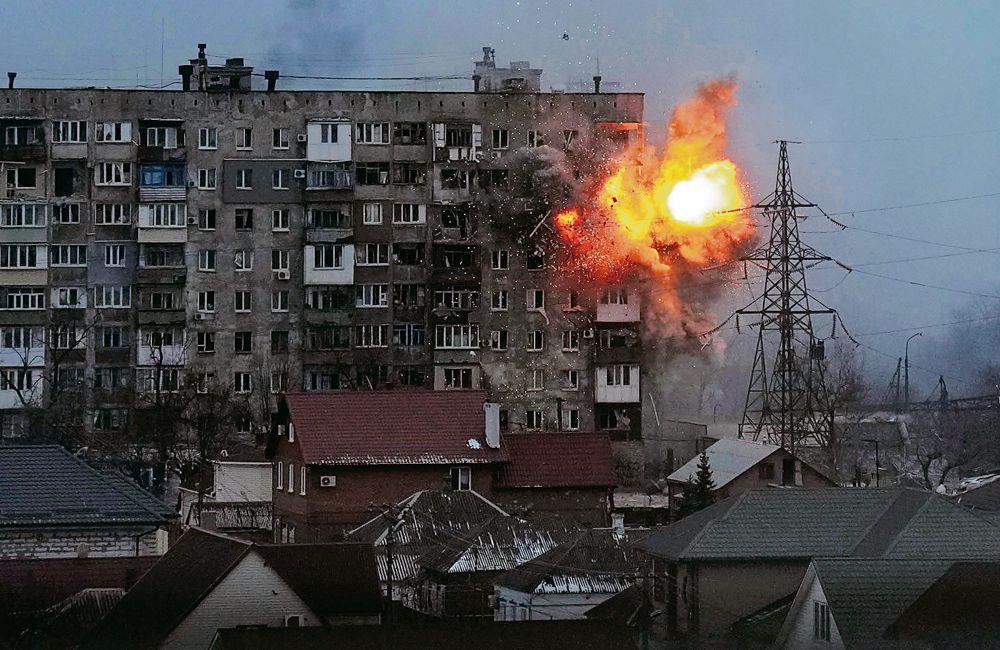 Strategy: Moscow is not keen on capturing cities, but on disabling Kyiv’s military capacity. AP

A successful war is invariably a popular one. The paradox is, to be a success, the war has to be popular, but not necessarily vice versa. This is where American policymakers, especially in the state department, and a big chunk of political elite, find themselves carousing in some fantasyland pinning hopes on a colour revolution in Russia due to the leadership’s decision to go to war in Ukraine. It must have come as a surprise and huge disappointment to them that according to even independent (rather, unfriendly) polls conducted in Poland, President Vladimir Putin’s rating has only soared to over 70 per cent during these past three weeks.

The unusual form of Russian action is because of its focus on restoring security of Donbass region and its boundaries.

For Putin himself, it is nonetheless a double challenge, as the statesman in him is defending Russia’s national security from the predatory mindset of the US and NATO while the politician in him is not only sensing and responding to the expectations of the people regarding the war but getting them to adjust to a painful (but historic) economic transition in the country due to its decoupling from the western economies. That involves switching attention from one planet to another on a sustainable 24X7 basis.

These nuances also explain the anatomy of Russia’s war in Ukraine — its ponderous progress, interspersed with lulls like a slowcoach of a provincial passenger train from time immemorial. In reality, though, in about half the time that the Pentagon took to seize control of Iraq during the 2003 invasion (with all the advantages that it was fighting an emaciated enemy degraded through a decade), Russia’s special operation appears to have more or less achieved its core military objective, which is to secure the Donbass region that has a big Russian population with extensive family kinships within Russia — an emotive issue, no doubt, given the genocide that followed the CIA-backed coup in Ukraine in 2014.

New kids on the block wouldn’t know that unspeakable atrocities were perpetrated by extreme nationalist and fascist groups against the Russian population through the past 8-year period. Over 14,000 civilians were killed, albeit in the American eyes, that didn’t qualify as “war crimes” because those fascist, neo-Nazi groups were largely mentored by them. Most of the 3.6 million people living in the Donetsk and Luhansk regions who survived the genocide speak Russian and one-fifth of them are Russian citizens. Arguably, the security of Donbass region and the restoration of its original administrative boundaries (as of 2014 before Ukrainian forces attacked pro-Russian separatists) is a salience of the Russian operation. That explains why the operation took an unusual form with the Russian forces avoiding fighting as far as possible and instead surrounding the Ukrainian forces and encouraging them to surrender. An estimated 60,000 Ukrainian troops are under siege and the effort is to make them surrender rather than take the easy route to vanquish them.

This has been the pattern of the Russian operation elsewhere too, which confused most Western analysts who expected sound and fury like General MacArthur’s in Japan — amphibious landings, frontal assaults on towns and cities and outright occupation. If we look at the map from northern Belarus border, clockwise, major cities — Chernihiv, Sumy and Kharkiv — have been surrounded. While Russian columns from Chernihiv and Sumy advanced toward the outskirts of Kyiv, those from east of Kharkiv moved south to link up with the forces in Luhansk and are currently engaged in taking control of the strategic Izium-Severodonetsk axis, which would establish Russian control of entire eastern region and virtually secure the Donbass region — that is, except for Mariupol port city on the Sea of Azov (which was originally part of Donetsk).

Mariupol will give the two independent Donbass republics a major port head that would provide them access to the world market, which is hugely significant for future development of that entire resource-rich region, straddling Ukraine’s rust belt. Mariupol is not only a centre for grain trade, metallurgy and heavy engineering but also higher education and business. Sensing Mariupol’s centrality to Russian strategy, the neo-Nazi Azov Brigade has been deployed to the port city. That explains the residual resistance.

The other focal point of the Russian operation currently is Kyiv, which is now surrounded on the west, north and east. On the face of it, Russian forces are not planning to launch a frontal assault on the capital city but that option remains. Again, Odessa, jewel in the crown of Black Sea and the legacy of Catherine the Great to Mother Russia, could be in Russian sights.

Clearly, the operation is limited to the eastern side of Dnieper river. The tactic is to target convoys of western arms with missile strikes. Lviv in western Ukraine witnessed an attack on Friday. Two days earlier, a large base 20 km from the Polish border and a major depot for weapons and training ground for mercenaries were also targeted. But the operations are not targeting Ukrainian cities and Moscow has no intentions of occupying the country, but is concentrating on limited surgical strikes to incapacitate Ukrainian military infrastructure.

Moscow seeks a peace agreement. But the catch is, the incumbent leadership of Volodymyr Zelenskyy is highly unstable and the ex-comedian himself is manipulated by folks in Washington who are wedded to the notion that the longer the conflict lasts, the more Russia ‘bleeds’. The global information field, which is traditionally dominated by American and British media — and the Anglo-Saxon countries in general — is creating self-serving narratives. Even in America, only Fox News presents some alternative point of view. To borrow from the Prussian General and strategist Clausewitz, the Ukraine war is veritably ‘a continuation of policy with other means’.