The fears of the framers of the Constitution about the misuse of the law of sedition seem to have come true as different governments have used it freely to quell democratic dissent. Recently, farmers, students, writers, political opponents, etc. have been arrested on sedition charges. And, the Supreme Court has rightly admitted the matter for scrutiny. 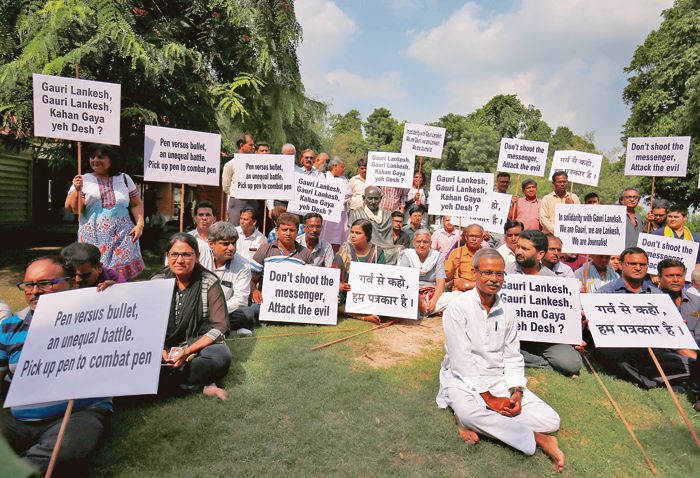 Quaint: The sedition law militates against the right to freedom of speech and expression and of life and liberty. Reuters

It’S quaint and paradoxical that while the Elizabethan law of sedition (1593), as refined and applied by different States later, was effaced from the statute book by the Coroners and Justice Act, 2009, we in India are continuing with this law as a criminal offence under Section 124A of the Indian Penal Code (IPC).

The British imperialists inserted this provision in the IPC in 1870. The background was the 1857 revolt. Yet, later, they used it liberally against even non-violent freedom fighters and people’s agitations against British actions and laws. Bal Gangadhar Tilak, Mahatma Gandhi and Bhagat Singh were some of those against whom sedition charges were slapped. The law was also used to curb free speech and expression in the print media.

But post Independence, though our fundamental right to free speech and expression got enshrined in the Constitution, the Union Government thought it fit to amend Article 19(2) of the Constitution to widen the scope of legislative powers to impose reasonable restrictions. Perhaps, the aftermath of Partition, the need to unite states still out of the Union, and the Kashmir dispute with Pakistan — in short, national integrity — were the justification to provide a constitutional basis to sustain Section 124A, even though the Constituent Assembly had dropped sedition.

However, the fears of the framers of the Constitution about its misuse seem to have come true as different governments have used it freely to quell democratic dissent. Recently, farmers, students, writers, political opponents, etc. have been arrested on sedition charges. And, the Supreme Court has rightly admitted the matter for scrutiny.

What is significant is that the freedom of speech and expression and the right to life and liberty as well as democracy are held by the Supreme Court to be a basic feature of the Constitution. The rights are fundamental, not the restrictions.

Democracy and these rights necessarily imply opposition to the government of the day. They imply criticism of government actions or inaction. Criticism can be sharp and pungent. Governments may dislike it, but that is irrelevant. So, the sedition law cannot be used to suppress dissent or dissenters.

But we have the problem of terrorism. National integrity is to be protected — it is the fundamental duty of all citizens under Article 51A of the Constitution. We have seen that threat to integrity comes from both within and without.

But we need to draw a line. The government of the day is not the nation, notwithstanding some supporters trying to project the PM as being synonymous with the nation.

The Kedarnath case, which upheld Section 124A of the IPC, is consequently, up for a relook. Should it be struck down or should the provision be just limited and further restricted to prevent misuse and create a wide space for dissent, criticism and opposition — in short, for democracy to have full play — would be the real issue.

In Australia, the sedition law has been replaced and only speech and expressions ‘urging violence’ are proscribed as offences since 2011. In Ireland, there is no sedition offence since 2009. In New Zealand, the sedition law was repealed in 2007. In the US, the law was made in 1918 during WW-I and later to quell communist danger.

The US Supreme Court has upheld the law. The debate continues. Presently, it is being considered whether sedition charges be slapped on the Capitol rioters. In Brandenburg v Ohio in 1969, the US SC held the government may not “forbid advocacy of the use of force or of law violation except where such advocacy is directed to inciting or producing imminent lawless action and is likely to incite or produce such action.”

The US law postulates the use of force and violence as an essential ingredient of sedition. The law is narrow and it has been restrictively interpreted.

Clearly, the global trend, on account of the abuse of the law of sedition, has led to either repeal or replacement by a restricted law and a restrictive interpretation of the law by courts.

Section 124A covers persons who by spoken or written words, visible representations or otherwise, bring or attempt to bring into hatred or contempt, or excite or attempt to excite disaffection towards the government established by law. And disaffection includes disloyalty and all feelings of enmity (Explanation 1).

Explanation 2 allows opposition to measures, without creating disaffection: “Comments expressing disapprobation of the measures of the Government with a view to obtain their alteration by lawful means, without exciting or attempting to excite hatred, contempt or disaffection, do not constitute an offence under this Section.”

The provision is clearly unreasonable and excessive. It militates against the basic features of democracy. It violates Articles 19(1)(g) and 21 of the Constitution. The government should give it a fresh look, and, if need be, replace it with a narrowly tailored law of sedition.