Hijab can’t be ousted from usage by law, it will need reforms within Islam 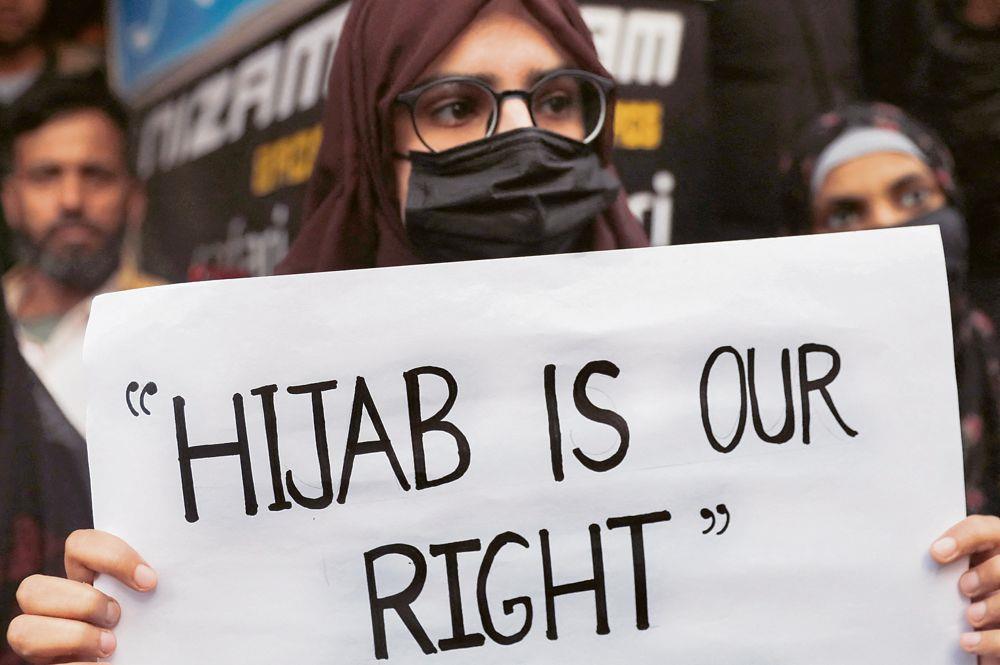 Take it slow: Give the issue time to resolve itself. Reuters

When I opined in an earlier article that the hijab has no Koranic sanction and that a ban on wearing it to college is something that the girls who wear it should not defy, I was upbraided by my daughters and grand-daughter! Their contention was that our Catholic nuns, pursuing higher education in different colleges, wear their habit when attending classes. From the days I spent in Punjab, I also remembered that Sikh boys wore turbans and kadas and some girls wore a head scarf to school if they had been baptised. Sikhs in the US armed forces have recently been allowed to sport turbans instead of regulation caps.

The covering of head for Muslim girls should be allowed, like turbans for Sikhs or the habit for nuns.

Going beyond school and college to the world of legislators, the BJP MP from Bhopal wears a ‘yogini’s’ saffron robes to Parliament and Yogi Adityanath, the CM of UP, wears saffron robes that mark him out as a Hindu monk. Asaduddin Owaisi of the AIMM wears his trademark sherwani and sports a trimmed beard that distinguishes him as a devout Muslim.

It is almost impossible to discriminate between India’s multitude of religions, castes and communities on how they should dress without singling themselves as belonging to a certain religious denomination. The hijab, for instance, has ceased to be a symbol of modesty or religiosity. It has metamorphosed into a political statement. In my state of Goa, we had never seen a Muslim woman enveloped from head to toe in a burqa. It is only very recently that local women have started donning that garb!

As I had said in my previous article, the hijab sends a message of subjugation of women. The garb worn by Christian clergy and religious sisters do not arouse thoughts of domination. So also with the Sikh turban and beard. But, unfortunately, the hijab gives the non-Muslim the uncomfortable feeling that the wearer is the ‘property’ of a man, to be admired only by the lord and master.

I agree that the hijab cannot be ousted from usage by law or by school or college decrees. It will need internal reforms within Islam. Compulsory conversion to Catholicism of a spouse in an interfaith marriage was an old requirement that was done away with by the church decades ago. Islam has not yet got round to burying that rule when nikahs are performed. In a multi-religious society like ours, inter-faith marriages are bound to pop up once in a while. The wise would wish to leave the lovers alone to sort out the religion angle.

After much introspection, I have come round to agreeing with my daughters that I had been hasty in voicing my hostility to the hijab. Give it time to resolve itself. As the community advances economically and socially, attitudes and rules will change and the girls will be content to cover their hair with a veil like orthodox women in many religious denominations, including the Hindus.

The Karnataka imbroglio was started with the intention of needling the minority community. The best counter to this mischief is to not get needled! The issue is now before the Supreme Court. The court will approach the matter with the judges donning their thinking caps.

My view is that covering of the entire face should not be permitted. It should be banned not only in centres of learning, but also in public places on security concerns. But covering of hair on the head should be allowed, like turbans for Sikhs or the habit for nuns. Orthodox Rajput ladies cover their heads with the sari in public. So, if Muslim girls wish to make a statement and the alternative is giving up on education altogether, the choice is to plump for education.

Any community that keeps its women uneducated is bound to remain backward. The BJP gloated over its anti-triple talaq law! It even claimed that Muslim women voted for the party in the recent UP elections. It should now support the girls who want to pursue their education in college. If permission to cover their hair is the price to pay for that primary benefit, so be it. These young educated women may bless the party by voting for its candidates.

Modi today rides like a Colossus on the national stage. The BJP’s 80:20 strategy of splitting the population on communal lines has worked. It won four of the five elections it fought this year. Even though people have seen through the promises and statements of politicians, they have been mesmerised by Modi. He has the glibbest tongue I have come across in the political arena. People hang on to every word that he utters.

And now he has Yogi to drive the double-engine. Yogi, too, has a large and committed following. He can stake his claim to the PM’s gaddi if and when Modi retires at 75. The difference between them is subtle. Modi is an astute politician who talks of ‘sabka vikas’, even if he does not expect Hindus and Muslims to be treated equally. Yogi makes no bones of his visceral dislike of the other. He proclaims it loudly, especially during electioneering.

Such dislikes are contagious. The South, which was comparatively free of communal bias, has been bitten by the bug! Karnataka, where Hyder Ali and Tipu Sultan once ruled, has shown the way. It was a BJP MLA who started the dispute in the girls’ college in Koppa tehsil of Chikmagalur district. He was the chairman of the governing council of the college!

The controversy has spread to other regions of Karnataka, and has the potential of crossing state borders. When an election comes up, it is likely to be resurrected to split votes on the 80:20 formula that succeeded so well in UP and possibly in Uttarakhand. The hijab is just one more red flag that has been raised after the lynchings, ‘love jihad’ and the CAA/NRC, where the BJP met unexpected resistance.