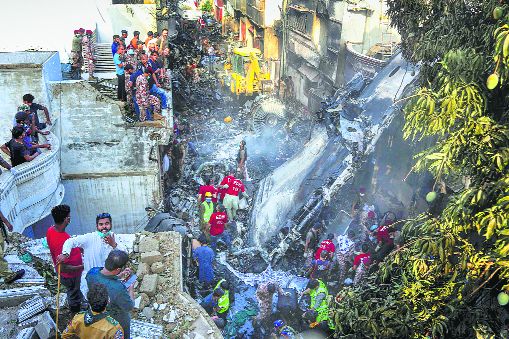 Grounded: The PIA has come under acute scrutiny over fake licences.

The crash of a Pakistan International Airlines (PIA) flight from Lahore to Karachi with 99 passengers and eight crew members on May 22, just before landing at Karachi, was a horrific incident that shook the country. This was the 12th major air accident in Pakistan, of which 10 involved the PIA and one each Bhoja Air and Air Blue. Dreadful as the crash was, especially for the families of those who died, it has resulted in opening a can of worms that has left the aviation world in shock and is a clear indicator of the malaise that afflicts the Imran Khan government.

According to the preliminary investigation report the accident took place due to human errors — the negligence of both the cockpit crew as well as the air traffic control tower. Releasing the report, minister for aviation Ghulam Sarwar Khan disclosed in the National Assembly that of the 860 pilots in Pakistan (753 serving in Pakistani airlines and 107 in foreign airlines), the credentials of 262 pilots were ‘dubious’ since they had appeared in exams through proxies and had been barred from flying. Of the 262, 141 were from the PIA, nine from Air Blue, and 10 from Serene Airline. The rest of the 262 belonged to various flying clubs or chartered services.

The revelation stunned Pakistan and left the aviation world aghast since it put the credibility of the Civil Aviation Authority (CAA) and the PIA in doubt. It raised fundamental issues: how could the CAA that is vested with the responsibility of issuing and renewing the licences of pilots every six months do so without proper verifications? The International Air Transport Association took immediate notice and expressed concern over the ‘serious lapse in the licensing and safety oversight by the aviation regulator’.

Foreign airlines were quick to respond too. Kuwait, Vietnam and Malaysia immediately grounded Pakistani pilots and engineers. The UAE asked for the authentication of the licences of 50 Pakistani pilots employed in its airlines. The European Union Aviation Safety Agency announced that the PIA would not be allowed to fly into Europe for at least six months since it was ‘concerned about the validity of the Pakistani pilot licences and that Pakistan, as the state of operator, is currently not capable to certify and oversee its operators and aircraft in accordance with applicable international standards.’ The UK Civil Aviation Agency suspended PIA flight operations from three airports — Birmingham, London Heathrow and Manchester. The US transport authority revoked permission granted to the PIA to operate special direct flights to repatriate people stranded due to the coronavirus pandemic.

The PIA’s international image has been shattered and it has lost whatever brand value it had. It will take longer than the six-month ban to regain a semblance of credibility. The reliability of the CAA too has been called into question and it will have to prove its integrity in issuing a wide range of licences and certificates. Most importantly, Pakistan’s own reputation in maintaining and operating its aviation sector has been seriously dented. Pakistan will now have to prove that its airline and its entire aviation sector is indeed airworthy, trustworthy and has the capacity to follow internationally accepted safety standards. The world is unlikely to be satisfied with only the pilots being grounded and re-tested; the entire gamut of air operations will come under scrutiny. Equally, Pakistan will have to re-establish that its airline is safe to operate in foreign destinations.

The issue is not confined to the PIA alone. For example, the UAE government has now refused to allow any passengers from Pakistan till a special Covid-19 facility is set up to test them. This decision has resulted from an incident where approximately 30 Pakistanis travelling to Hong Kong via Dubai tested positive at the destination. Such instances are primarily due to Pakistan having drastically reduced testing to show a lesser number of positive cases. Quite possibly, other countries may follow suit.

A larger issue is of trust and reputation. Airlines operate domestically and internationally on the basis that the planes and pilots are credible and satisfy the rules and regulations of air safety. Doubts about the ability of pilots or the reliability of the aircraft destroy confidence in the airline, its pilots and the country. If a critical sector like aviation cannot be trusted, how can other sectors and institutions be trusted? How can the country itself be trusted? Such trust will take years to rebuild.

The range and number of such governance fiascos is increasing in Pakistan: the wheat and sugar scandal, spurt in petrol prices, Imran Khan calling Osama bin Laden a martyr, calling the people of Lahore jahil (illiterate), infighting in the top echelons of the party and government, the poor handling of the pandemic, and now the PIA pilots’ scandal. All these reinforce the image of the government, especially of Imran Khan himself, as being incompetent and out of his depth in trying to govern a country as complex as Pakistan.