The virus has beaten us all and there has never been a worse time for the country. Meanwhile, the Bengal election will have long-term effects on the polity, which in a matter of seven years is no longer a fight between two parties, one tired and one passionate, with a wrong reading of history. Mamata Banerjee is in the chair, all the bluster from the opposing throats has ended in fluff 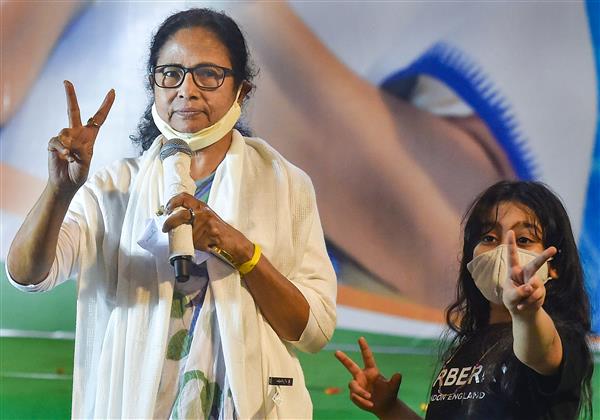 At the moment it is hard to point out victors or the vanquished in our land. The virus has beaten us all. There has never been a worse time for the country. Kurukshetra and its 18-day war, and the three battles of Panipat, and centuries later to our retreat in 1962 would be no match to what has been witnessed in the oxygen-devoid hospitals in our country. Our mahamari in history put together could hardly match the current ravages, virus plus electoral meetings, put on by Delhi, and the destruction of the Central Vista to follow.

But willy-nilly electoral battles are fought on the ground. Hence I was quite disappointed to find analysts like the once Prasar Bharati chairman shifting the scene to some mythical war in the skies — Durga Ma versus Jai Sri Ram. For too long has Hindu iconography dominated Indian thought, and even, by extension, Indian politics. Forget your legends, demons, demon slayers, Mahishasur Mardini. Get back to real struggles on the ground, and fight for the have-nots, the rice-less poor. That’s what Mamata Banerjee did — stay on the land, campaign, withstand the bullying. All bullying gets an element of untruth mixed in it, often unknowingly. Expose it. Watch the air armadas descend from Delhi, surfeit with well-fed denizens from the Hindi heartland, Gujarat, watch the Bishts from Pauri Garhwal — lately transferred to Gorakhpur — sport their ochre and grimace at this lone woman. Incidentally, is the Delhi party paying for all the air traffic they are taking part in? The money needs to come from party coffers, not government treasuries. (For the BJP, that would mean NRIs.)

And she was vilified. Madam, you’ll be on the road, come May 2. There will be no Didi. She is in the chair, all the bluster from the opposing throats has ended in fluff. The BJP had all the odds in their favour. They had the backing of the Centre, the most partisan of Election Commissions we have had the misfortune of seeing. They had money power, were coming down a winning streak. And they had a fairly thriving communal agenda which had seen them through. But they got beaten on economic issues, social and communal issues. There was not an idea they could add to the old wornout ‘minority appeasement’ argument of LK Advani, who has to bear a lot of blame for all the riots that have befallen on this land of ours. The Hindi heartland was looking for a beating in the East, and it got it true and proper.

Their tactics were all wrong. They got it wrong in the insider-outsider (Bohiragoto) streetfight. They got it wrong with turncoats. Any rickshaw-puller could have told them that turncoats are not to be trusted. Many of them had tainted records which had brought disrepute to the TMC itself. According to press reports, 148 tickets were given to such people and only six of them won their seats. That should be a record of sorts. Bengal BJP president Dilip Ghosh blamed ‘campaign policies’ for the debacle.

The TMC had worked hard, driven by their leader. The manifesto promised five lakh jobs a year. Even if this sounded overblown, the intent was there. And the farmer’s income had been raised almost three times. Poverty had been reduced by 40 per cent. Yes, much of this is blown, but something of this drive remained on the ground. There was free door-to-door ration delivery, which won grudging acceptance from the hard-bitten saffronites. The poor loudly claimed that they got rice during the lockdown ‘when we had no money’. The poor don’t forget, and a hungry stomach has a good memory. And no one needs to teach us gratitude. It comes naturally to us.

Lastly, there were two schemes for women — the Kanyashree, the cash transfers to the girl child, and the Rupashree, a financial grant of Rs25,000 at the time of the adult daughter’s wedding. Did the Congress even think of such schemes? There lies the difference between the two. The Congress needs to recognise that their three are no match for the 20-odd intellectuals and old workers on the other side. The three have to let go of the reins. You can’t hold on to them forever, on the strength of genealogy and dynasty.

These elections have long-term effects on the polity, which in a matter of seven years is no longer a fight between two parties, two ideological arms, one passionate, one tired, willing to let go, unsure even whether it wants to hold on to; one a passionate party with a wrong reading of history and the supposed wrongs it has heaped on it. Ideology cannot be sorted out easily, especially if it is tied to history, the invader from the North armed with his iconoclasm, carrying away the loot and also ruling over the people. There are also the language and cultural spikes, invasions, the Hindutva knock on the secular door. The South stands vulnerable, land to graze your cowherds. To borrow a syndrome from Pakistan, it is the Zia-ul-Haq freedom, he could do what he liked with Zulfikar Ali Bhutto.

One has only to contrast the scenes — the end of the UPA-II, where Sonia Gandhi seemed to have wrested all powers, saddled with files she did not know what to do with, and a somnolent Manmohan Singh in the background. And watch the second coming of Modi, the bravado, Kashmir, CAA, and the chipping and chopping of the polity.