Extremist thinking and the spectre of sedition

Earlier, we had learnt to treat every individual as innocent unless the state is able to conclusively prove otherwise. I am also asking myself whether we are still in a liberal democracy guided by the Directive Principles enshrined in our secular Constitution. Or have we somehow slid into a stage of the Joseph McCarthy era in America (1947-57), which is where US Attorney General William Barr is taking his country by filing sedition charges against ‘radical socialists?’ 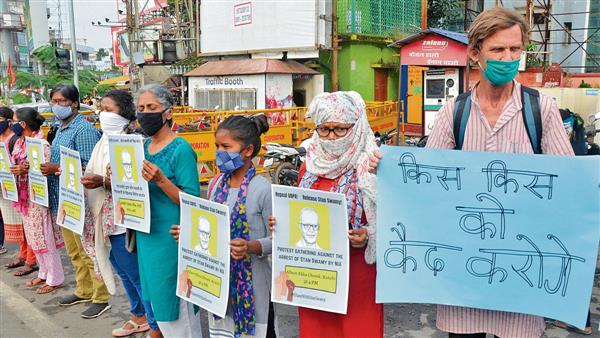 Anarchists? Several civil rights activists and academics have been charged by the NIA in the Bhima Koregaon case for the gravest offences against the state, including arms training.

While the Justice JN Patel-led Bhima Koregaon Commission is yet to finalise its report, the National Investigation Agency (NIA) filed a 10,000-page charge-sheet on October 9. The NIA felt that it was a ‘plot to damage the state’. Several civil rights activists and academics were charged for the gravest offences against the state, including arms training. Among them is 83-year-old Jesuit priest, Stan Swamy. A stunned Jharkhand Chief Minister Hemant Soren asked: “Why this insistence on crushing every voice of dissent?”

I feel totally outdated in my understanding of our present criminal jurisprudence. Earlier, we had learnt to treat every individual as innocent unless the state is able to conclusively prove otherwise. I am also asking myself whether we are still in a liberal democracy guided by the Directive Principles enshrined in our secular Constitution. Or have we somehow slid into a stage of the Joseph McCarthy era in America (1947-57), which is where US Attorney General William Barr is taking his country by filing sedition charges against ‘radical socialists’?

In 1947, when Senator McCarthy started his ‘witch-hunt’, he was backed by the 1940 ‘Smith Act’, which during the war time had made it criminal to ‘advocate violent overthrow’ of the government or be a member of any such group. McCarthy and his lawyer Roy Cohn started their inquisition against hundreds of government servants, writers, stage and cine artistes and journalists. It also resulted in the preparing of unofficial ‘black lists’ of people who should not be hired. Among those ‘blacklisted’ were Hollywood personalities like Charlie Chaplin, Orson Welles and Paul Robeson.

It was in 1957 that the US Supreme Court put an end to this scourge through Yates vs United States, stating that the First Amendment protected radical and reactionary speech unless “it posed a clear and present danger.” The same was quoted by Judge William Webster in his 2009 Fort Hood shooting inquiry report: “Radicalism is not a crime. Radicalisation alone, without incitement to violence, may not constitute a threat.” The Fort Hood killing had shaken the American military when Major Nidal Hasan had shot dead 13 colleagues.

Academic interest in extremist thinking had started in the 19th century Europe due to provocative calls by ‘anarchists’ like Karl Heinzen, Johann Mist and Mikhail Bakunin. But they were mere ‘philosophical revolutionaries’ with no infrastructure to back them. In 1961, eminent French philosopher Jean-Paul Sartre wrote the preface to Frantz Fanon’s book The Wretched of the Earth, which supported violence by the colonised people in Algeria against the French colonisers. In 1971, Sartre and Simone de Beauvoir openly defied the ban on Maoist La Cause du Peuple, a publication of the banned party and courted arrest. Neither of them was charged.

In a similar manner, our Naxalite problem, later known as the Maoist movement, has always elicited interest by the foreign media, security experts and academics. One of my first interviews on that problem was published on October 29, 2003 by the Christian Science Monitor and the Washington Times. On April 26, 2005, an Indian daily published my review of my friend Prakash Singh’s French book Histoire du Naxalisme which had earned the ‘Selection of the Month’ honour by Boutique Librairie Quilombo, Paris, in 2004.

In June, 2006, I was requested by the Mumbai Nehru Centre to chair a full-day seminar on the Maoist problem, for which I had prepared the theme paper. This was, perhaps, the first ever joint meeting of serving and retired police officers with human rights activists and media. Among those present was senior editor, the late BG Verghese, who had just returned from Chhattisgarh after studying the atrocities of the state-sponsored ragtag army Salwa Judum. Also present was Prof G Hargopal, who had established the Centre for Human Rights at the Hyderabad University.

In 2007, I visited Hyderabad for two days to study the subject in depth by meeting people who had dealt with the problem at the grassroots level. My first call was on the late SR Sankaran, the legendary IAS officer. He and his seven colleagues were dragged into the vortex of the Peoples’ War Group (PWG) violence as they were kidnapped in East Godavari district on December 27, 1987. They were released in exchange for some arrested PWG cadre by the NT Rama Rao government.

Sankaran utilised his captivity to study the social issues behind this movement. He came to the conclusion that it was due to the traditional exploitation by village officials and neglect by successive governments. He also shocked me by saying that an ordinary Adivasi found the Maoist parallel government more beneficial to him than by the state. He was firm that a mere ‘law and order’ approach would never solve it.

The second person I met was a retired police officer who had spent his entire life investigating and prosecuting PWG/Maoist cadres. It was he who told me that the basic reason why an ordinary Adivasi joined the rebel movement was his feeling of ‘empowerment’ against local officials, contractors and money lenders. They felt that this was the only way they could resist this daily harassment.

More recently, we were told that Dalit singer Bant Singh from Punjab had joined the Mazdoor Mukti Morcha affiliated to the CPI(ML) to ‘empower’ himself against his formidable opponents. In 2002, upper-caste men allegedly raped his 19-year-old daughter. In 2006, he lost both hands and one leg in an attack by the accused after they were prosecuted.

I do not want to comment on the evidence against the Bhima Koregaon accused as it appeared in the media, except one instance. I was intrigued by a report that Gautam Navlakha was approached by the ISI during his foreign trip to help them raise agents. This would lead us to the conclusion that the ISI was so ham-handed in its approach as to leave such open trails. My long experience in foreign intelligence does not allow me to reach that conclusion.