It is clear that religious congregations can spread the Covid-19. But in India, beyond the infection, the consequences of the Tablighi outbreak have been dreadful for the world’s third largest Muslim population, most of whom are employed in the unorganised sector, as all workers are. At a time when people are scared of the unknown, many have settled for hating the known enemy even more than before. 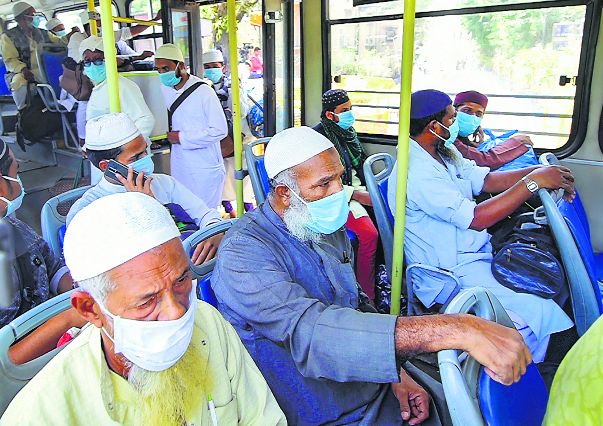 Worrying: Tablighi outbreak has been dreadful for the Muslims reeling under the lockdown.

In his bestselling book, 21 Lessons for the 21st Century, Yuval Noah Harari argues that Homo sapiens is a post-truth species, whose power depends on creating and believing fiction. He says that we are the only living creatures that can invent fictional stories and then convince millions to believe in them. So, when a thousand people believe a made-up story, we call it fake news, but when “a billion people believe it for a thousand years, that’s religion.” He also notes that religion can provide solace to millions, as it indeed does, and observes that people may be upset with his equating of religion with fake news.

Founded in 1927 in Mewat, India, the Tablighi Jamaat is one of the most powerful religious reform movements in the 20th century Sunni Islam, with millions of followers across the world. Briefly, the Tablighis find it necessary to travel across the world, and upon arrival within the boundaries of nations, travel some more, to spread their word that what they think is the last word on Islam. Travelling and congregating in order to urge the believers to follow a ‘pure’ form of the faith is what they do.

Now that it is established that the gathering of thousands at their Delhi headquarters in March has turned out to be the biggest ‘super-spreader’ of coronavirus in India, it is worth noting that individuals who take it upon themselves to tell people how to live their lives are so woefully unmindful of science, modernity or even common courtesy. Media reports say that the head of the Tablighi Jamaat, Maulana Saad, told the faithful that there was no need for social distancing or following the advice of doctors as that was only an excuse to divide the power of the congregation. Not very different from some Pentecostal Christian preachers in the US telling their congregations that the virus is a hoax and only belief in God can save them.

But where the Tablighis really broke the coronavirus bank is that they insisted on gathering people with a history of foreign travel at their headquarters in Delhi, besides spreading the disease in Malaysia and Pakistan.

Like many puritanical religious groups in the world, they believe they know better and are special people, while most human beings (including many Muslims) live in ignorance and follow false beliefs. The Tablighis have a distinct dress and beard as they believe it is how things were in the lifetime of the Prophet. It’s a bit of a mystery how anyone knows what the length of the trouser or pyjama was or if the beard was grown while the upper lip shaved thousands of years ago, but that is the dress code of Tablighis, as apparently the Prophet said that clothes must not drag on the floor. It’s a small quibble as world religions speak of immaculate conceptions and unscientific miracles and fantastic improbable things.

The good aspect of the Tablighis is that they preach ‘inner purity’ and a simple life (lavish weddings are frowned upon). Women, entirely in purdah, can participate and work alongside men related to them to spread the word. But it is mostly a male brotherhood, as is the case with organised Islam across the world.

The Tablighis are detached from politics and, in that, they are distinct from schools of political Islam that advocate violent means to overthrow regimes and establish Islamic rule. They are not interested in converting people, but in showing Muslims how to be, well, ‘good Muslims’.

In the spectrum of the subcontinental Islam, the Tablighis stand at the opposite end of the pole to the Sufis. Among the most significant of the Sufis was Delhi’s Nizamuddin Auliya, the 13th-to-14th century saint, in whose dwellings, new forms of music, poetry and language were birthed. For those who know the fine print, it is a double misfortune that the Tablighis are now associated with the hashtag #Nizamuddin. This is because their headquarters, the Markaz, happens to be located in the Delhi neighbourhood named after that great Sufi of the Chishti order.

And in this outrage at the Tablighis being the super-spreaders of the coronavirus, let us not forget that it was the Sufis who were the super-spreaders of Islam in the Indian subcontinent. They accommodated many local traditions and were not puritans by any stretch of the imagination, but individuals who explored love, devotion and equality even as they revelled in the colour, sights and sounds of the festivals. Part of the Tablighi endeavour is to ‘cleanse’ Islam from precisely these practices that remain popular in Sufi shrines and, indeed, Indian culture. No qawallis for the Tablighis, no pluralism or syncretic traditions for them, no composite culture. This is also the time to remember that many hymns attributed to Baba Farid, a Sufi of the Chishti order, are incorporated in the Guru Granth Sahib. It was said that Guru Nanak met Baba Farid on two occasions.

In the age of coronavirus, it is clear that faith groups and religious congregations spread the infection. But in India, beyond the infection, the consequences of the Tablighi outbreak have been dreadful for the world’s third largest Muslim population, most of whom are employed in the unorganised sector and reeling under the lockdown, as all workers are. At a time when people are scared of the unknown, many have settled for hating the known enemy even more than before. The regular television appearance of obdurate mullahs does not help.

Anyone with a Muslim name is now being attacked on social media, many TV anchors are stoking all the subliminal prejudices and some people are advocating a boycott of Muslim-owned businesses. Reports of attacks on Muslims are coming in along with a disturbing story in a newspaper of a hospital refusing to deliver the child of Muslim parents. Communalism, coronavirus and fear make a lethal combination. The hatred is worse than it’s ever been and we do have well-oiled supply lines to keep pumping up the communal poison. Can we please choke those lines?