It is the entry of the politician into the bureaucratic structure and the havoc he has wrought in the day-to-day administration that has led to this miserable decline as far as the police is concerned. A police force brought to heel by state governments is further ground into the dust by Central organisations 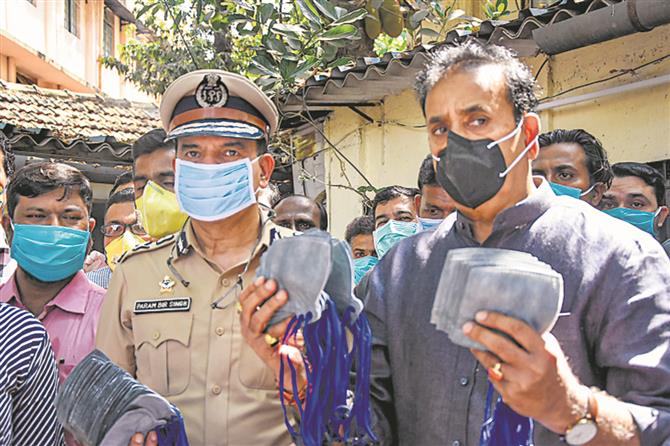 While growing up in Pune in the early 1950s, one always heard the elders referring to Bombay Police as the Scotland Yard of India. Bombay Police had a formidable reputation for its professionalism and integrity. Looking back today after having retired from the police, my conviction remains that Bombay Police was the best police force in the country when we joined the IPS. It has been over a month since the former Mumbai Commissioner of Police fired the first shot against his own Home Minister. He could have written to the Chief Minister, the Home Secretary or the Chief Secretary before his transfer. In fact, he should have written on the very day that the Home Minister is alleged to have instructed him and his subordinates to indulge in illegal acts. The fact that he failed to do so leads to the inescapable conclusion that he was party to whatever was happening. He was the chief and the responsibility was his and by failing to lodge a protest, he compromised his moral and legal position. Lodging a protest after his transfer is another matter and he does so with diminished credibility.

I do not propose to bring in the Ambani affair, that is a matter of investigation which will soon get muddled up in a maze of enquiries by various agencies with no clear end result. Let me stick to the ‘transfer’. I’ve waited for over a month in which I kept on scanning newspapers to find reactions to this episode. As far as I’ve seen, there has been no reaction from the IPS associations, either Central or state. Nor has there been any reaction from the organisation of junior officers. Similarly, the NGOs and various other civil society groups have kept quiet. The silence of retired officers, especially those based in Mumbai, Delhi or other metros, is intriguing, to say the least. The Maharashtra government and the political parties in power have thrown the allegations into the dustbin after calculating for a few days the pros and cons of any government reaction. We now await the verdict of the Bombay High Court but already the media and the people have moved on to juicier topics and Param Bir Singh should consider his days in the sun as over. I’ve written about the lack of reactions in some detail because how come not a single protest has taken place in the aftermath of the CP’s abrupt transfer? How come such a deafening silence on the part of the people and the police?

I’ve written earlier about the gradual decline in the professional and moral standards of the police over the years, especially since the mid-1970s. Without going into details, it is the entry of the politician into the bureaucratic structure and the havoc he has wrought in the day-to-day administration that has led to this miserable decline as far as the police is concerned. The politician discovered that recruitment and transfers at all levels are his best weapon which bring both money and power. Pliable officers had also realised the potential of cooperating with the politicians and so the tango began. Other groups in society also sensed the true worth of the police, especially in all metropolitan cities and more so in Mumbai, which was growing at great speed, with huge amounts of black money floating around. Many incidents have happened in the brief history of this metropolis, which has come to represent so much of both the good and bad in India — Mumbai is the financial hub and is therefore representative of the economic growth which the country has seen, and has been the centre of both the formal and the black economy. With the entry of the black economy, smugglers, drugs, criminal underworld and its various gangs and lobbies, the importance of the police protection system came into being. They were all initially interconnected and the same sources financed bootlegging, drugs, films, laundering of black money and smuggling on international levels. All these activities needed police protection and so the leaders joined hands with the politicians to control the police through prized postings and appointments. The political-criminal-police nexus was born, with police officers vying for prized postings.

The lobbies mentioned above started sponsoring candidates for their lucrative positions and thus having obtained prized postings, they had to deliver results, as a consequence of which normal standards of professionalism and integrity suffered heavily. The Bombay riots of 1992, the subsequent bombings in 1993 and the massacres of 2008 were the fructification of this evil nexus. Mumbai Police failed on almost all fronts. Haphazard individual efforts could not replace a trained, coordinated response and so many died in vain. No special cells had been set up, no efforts made to gather specific intelligence and no problems anticipated.

I have given a brief description of a city bursting with activity, of a police force besieged from within — do we expect them to come out in support of Param Bir? What has he done for them? These are not personal but rhetorical questions, which is why even today Pawar wants a 92-year-old retired police officer to inquire into this sordid affair. I’m sure that there are other equally good officers, but Mr Ribeiro struck a chord with his officers and men wherever he went and looked after them as he still does. It is not only the state governments and their officers and men who have done the maximum damage to police professionalism and integrity. Law and order being a state subject and control of the police such an important matter, the MHA has been trying to nibble away at these powers and acquire for itself an important role. It was the CBI at first through which the Centre operated and inquired into serious cases in which it had political or business interest. This led to weakening of the state police and a fall in its professional standards. The CBI experiment has proved to be a success for the interests of the Centre and today the MHA is using the CBI, NIA, ED, IRS, Customs and Excise, Narcotics Bureau, etc.

Without the knowledge of the state government or police, hundreds of them descend upon dozens of locations and you read about hundreds and thousands of crores recovered and then the news dries up. All is gradually forgotten until the next target is unveiled and proceeded against. A police force brought to heel by state governments is further ground into the dust by the Central organisations, which imply that the state police is party to all these nefarious activities and so the knights in shining armour come from Delhi and do the needful. Let me disabuse them of their ignorance. In the eyes of the people, they are considered far worse than the state police because their targets are given to them from Delhi, the actions are virtually supervised from Delhi and people are left guessing as to what happened.

So, to conclude, back to the question as to why Param Bir stands alone today. He chose to do so when only he knows under what circumstances he accepted the posting. Forgetting all this, why did he keep quiet when an illegal demand was made by the HM? He chose ‘Omerta’ and hence must take the fall. However, let us not worry too much, the sponsors behind the scenes will sort it out. That is why godfathers have ‘consiglieres’.

— The writer is ex-chairman

Governor and served as J&K DGP