Farming can’t be sacrificed at altar of trade

To fix the problem created by the swelling corporate milk output, India is under pressure to open its dairy sector to US imports. Just like accusing Canada of protectionist policies, Trump has called India ‘tariff king. The proposed US-India trade deal, too, has the US seeking an increased market access for its highly subsidised farm produce. 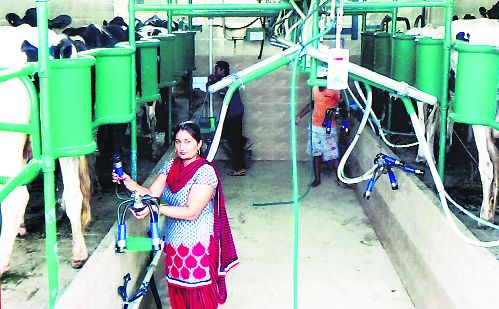 For decades, American dairy farms have been hit by low prices. While the small dairy farms have increasingly pulled down shutters, the continued expansion of corporate farming has resulted in surplus milk production, leading to a fall in prices. In the past six years, milk prices have seen a 40 per cent drop on an average.

In 2016, more than 43 million gallons of milk was thrown away by the farmers. This huge milk waste could have filled 66 Olympic-sized swimming pools, says an estimate. Regardless, corporate milk production continued to soar while another 3,000 dairy farms closed down in 2019, says a report of the US Department of Agriculture (USDA). This necessitated US President Donald Trump to look for export markets.

President Trump blamed Canada for adopting protectionist policies. He was particularly harsh about the need for Canada to pull down the import tariffs on dairy products. This became a contentious issue while the US was renegotiating the NAFTA treaty with what is now called as the US-Mexico-Canada Agreement (USMCA). Canada relented, made a limited concession, allowing the US a small opening — 3.6 per cent access to its market. In addition, it also allowed the entry of infant formula, cheese, cream, butter and other products.

Mexico, too, allowed the import of certain US cheeses but otherwise remained firm on not opening up any further. Meanwhile, Kenya is under a lot of pressure to allow US dairy products under the proposed US-Kenya FTA under negotiation.

It is now the turn of India. To fix the problem created by the swelling corporate milk output, India too is under pressure to open its dairy sector to American imports. Just like accusing Canada of protectionist policies, President Trump has repeatedly called India ‘tariff king’ and often expressed his dissatisfaction by saying, “We’re not treated very well by India.” He had been particularly harsh on the high import tariffs on Harley Davidson motorcycles. India had obliged, and Prime Minister Narendra Modi informed the US President of the duty cut offered.

Since then, America has upped the ante, which was quite evident when President Trump announced before departing for India in February: “We are doing a very big trade deal with India. We’ll have it. I don’t know if it will be done before the election, but we’ll have a very big deal with India.” He was referring to the US-India Free Trade Agreement (FTA) which has been under negotiation for quite some time. But, in the meanwhile, a ‘quick trade deal’ for an early harvest is almost ready. “We can do an early harvest in terms of 50 to 100 products and services,” Commerce Minister Piyush Goyal had told a virtual meeting of the US-India Business Council.

While a ‘quick deal’ or a bilateral trade agreement does not have to strictly conform to any World Trade Organisation (WTO) obligations, the attack on the Indian agriculture and dairy sectors appears to be on both the fronts. To meet the WTO commitments, India had in June allowed the import of five lakh tonnes of maize and 10,000 tonnes of milk and milk products at a lower import duty and that too when farmers cultivating maize and those producing milk were faced with depressed prices. The proposed US-India trade deal, too, has agriculture and dairy placed high on the agenda with America seeking an increased market access for its highly subsidised farm produce.

Although 93 per cent of the small dairy farms in America have closed down since the 1970s, the consolidation of big dairy farms in the US in tune with its policy of ‘get big or get out’ has turned it into the world’s second largest milk producer.

In India, there are 8-10 crore dairy farms. Even though a large number of dairy farmers have an average of two to five head of cattle, India is at present the world’s largest milk producer. Over the years, the number of families owning 15-30 cows has been steadily on the rise. Although between 2000 and 2016, as per a study, India has seen almost 52 lakh small farmers quitting dairy, the country can’t afford any more closure of dairy farms. Any further opening up should be a matter of concern given the extent of agrarian distress that prevails.

Further, the three ordinances that form a part of the marketing reforms in agriculture too are aimed at the commercialisation of Indian agriculture: bringing in corporate agriculture and consolidating production in the years to come. These autonomous reforms appear to be in sync with the WTO policy that restricts the product-specific support under minimum support price (MSP), keeping it within the agreeable limit of 10 per cent of the total value of production.

Already, the US, Canada, Australia and a host of other countries have questioned India for breaching the price support in wheat, rice, cotton, sugar and pulses. Although India has defended the higher MSP under a ‘peace clause’ exemption it enjoys till a permanent solution is arrived at, sooner or later, this will be under the chopping block.

In 2010, the then US Trade Representative (USTR) had said: “We are exploring every alternative and every enforcement tool available to us to get India to open up their markets on a number of agriculture issues.”

Four years later, 14 US agricultural commodity export organisations had written to the USTR expressing displeasure at the temporary safeguard accorded to India by way of ‘peace clause’ which would dampen the export possibilities. All eyes are, therefore, on getting more market access into India.

Later, in November, India walked out of the Regional Comprehensive Economic Partnership (RCEP) treaty, realising that the country would be flooded by imports, mostly in agriculture. With Atmanirbhar Bharat being the new vision, agriculture cannot be sacrificed at the altar of trade.