A Stanford University study has been critical of how the Indian Army has hogged the budgetary allocation, but persisted with an orthodox offensive doctrine. This doctrine of holding ground through deployment of large army formations has allegedly tended to make the policy-makers not consider armed action viable in any given scenario. While this may be a bit far-fetched, the present dispensation remains amenable to giving a free rein to the military. 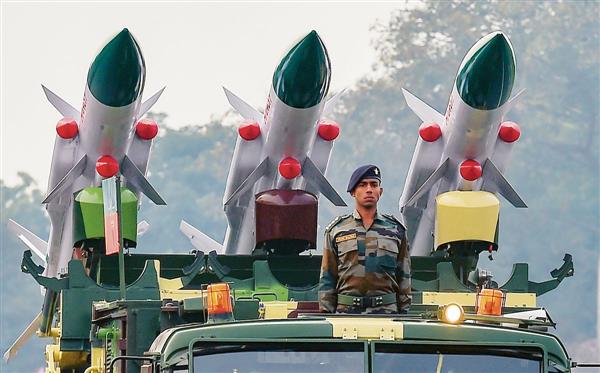 Matching up: The deployment of missiles and beefing up of security in Ladakh with the air defence system have created confusion as to what is there in the offing.

Whilst any tangible de-escalatory measures are to be welcomed, we cannot afford to lower our guard on readiness for some kind of a border skirmish with China. The reported deployment of Nirbhay and Brahmos cruise missiles and beefing up of security in Ladakh with the Akash air defence system only serve to add to the confusion in Indian minds as to what portents need be read. There have been analyses and prognoses galore about the outcome of a possible mountain skirmish between India and China in the inhospitable Himalayan terrain north east of Leh. The stand-off at Galwan and the casualty ratio supposedly in our favour (20 to over 100, by one account) has pointed towards factors other than mere numbers that dictate the outcome of battles and wars in all three domains. Though in the sectors concerned, both armies are stated to be evenly matched in numbers, the ‘willingness to fight’ indices of both militaries perhaps would dictate how any likely skirmish in the future would pan out. Military history is replete with disastrously wrong assumptions of the soldier’s willingness to fight. The outstanding performance of the Special Frontier Force in those inhospitable terrains only reinforces the validity of our better fighting spirit. Defence planners have long employed computer simulation to determine the outcomes of conflicts, crunching data such as number of troops, weapon wherewithal, ammunition stockpiles and the like. Artis International of Arizona, a think tank sponsored by the US Defence Department, has been researching on the effect of morale on fighting a war. There may be lessons in store down the line when we assess the troop morale factor between the Indians and the Chinese. Assessing enemy morale is indeed critical for war craft and there appears to be a distinct advantage we have in terms of troops such as our Special Frontier Force whose motivation to wage war against an adversary that has evicted them from their homeland would be considerably higher than comparatively ‘soft’ Chinese recruits conscripted to fight a war they do not wish for. Studies by Artis have found that the willingness to fight index is governed by soldiers least interested in financial considerations and material well-being. The Warfighter Effectiveness Research Centre (WERC) of the USAF in Colorado found that flagging fighting spirit in pilots leads to lowered reaction time. Even governmental ideologies would be factors in the outcome of wars, our liberal democratic credentials weighing up against the totalitarian communist methodologies and mindset of the Chinese. The Americans, of course, learnt the hard way from underestimating the grit and determination of Vietnam’s National Liberation Front during the 1960s and 1970s. Likewise, in June 2014, some 1,500 ISIS fighters managed to rout an opposing force of government troops in Mosul, though outnumbered 15 to one. It goes to show that numbers alone don’t count when the bullets start flying. It’s not to directly compare these instances to plausible outcomes of an Indo-Chinese skirmish in Ladakh, but to indicate how the intangibles could turn the tide in modern warfare.

Another Stanford University study has been critical of how the Indian Army has hogged the budgetary allocations, but has persisted with an orthodox offensive doctrine. This doctrine of holding ground through deployment of large army formations has allegedly tended to make the policy-makers not consider armed action viable in any given scenario. While this may be a bit far-fetched in theory and practice, the fact remains that the present political dispensation is more than amenable to giving a free rein to the military. It behoves the military, therefore, to ensure that its doctrines are constantly updated and the troops maintain the cutting edge. Aspects such as professional military education, realistic training and the right kind of equipment and combat support elements of course are vital to develop a ‘thinking warrior’ mindset on the battlefield. As far the IAF is concerned, the need for a proactively dynamic air war strategy needs no gainsaying. More so in difficult terrain and altitude, offence is indeed the best defence and air power needs to be unleashed forcefully and unexpectedly across all the envisaged air campaigns, viz, counter-air, counter-surface force and strategic air campaigns. Interdiction of enemy lines of communication will have a telling impact on the adversary’s combat potential, especially in Tibet region. The IAF also needs to capitalise on its lately acquired world-class war-fighting potential in terms of platforms, weaponeering and viable tactics.

A proactive, hard-hitting air force often delivers results out of proportion to the flying effort. Air power augments the army and naval war prosecution efforts admirably and more so with the new-found impetus for jointry, we should be able to give a good account of ourselves. No air operation can be allowed to get short shrift, including air transport operations, combat support air operations and combat search and rescue. The story of the 54 missing PoWs from 1971 still rankles and reflects poorly on our war-fighting culture and national priorities.

So now that we seem to have a supportive establishment in Lutyens’ Delhi, the military needs to deliver effectively in pursuit of our national military objectives. An integrated war-fighting machine, led by thinking leaders at all levels, would alone be able to fight the way we train and bring forth the indomitable fighting spirit of a powerful nation. These doctrinal adaptations for timely aggression across the targeting cycles are all the more valid for the IAF because air power sans timely offensive campaigns is as good as no air power at all. Media hype over new inductions as witnessed recently over the Rafale arrival needs to be curtailed to focus on suitable offensive strategies to deliver the goods when called for.