The micro, small and medium enterprises (MSMEs) hold a very important position in the economy and their contribution to the GDP is around 30 per cent. Besides, they contribute 50 per cent of exports and employ 11 crore people. Unless the MSMEs are revived, it will be tough to reverse the current economic slowdown and ensure growth in employment. 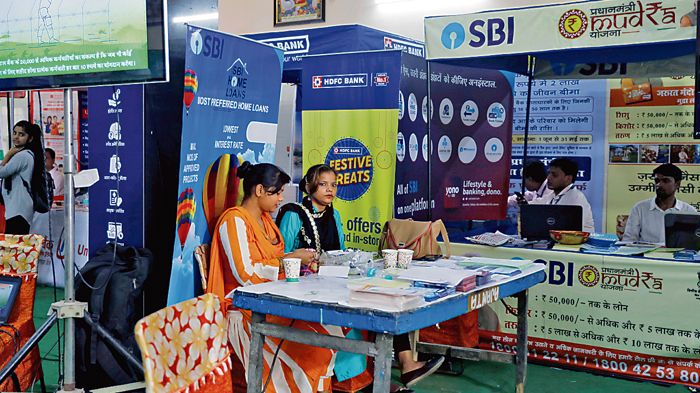 Onerous recovery: Banks have become much more prudent in lending to the MSME sector which has registered a slow growth.

For the economy to revive in 2020, one of the most important things would be the strength of the financial sector. Both consumers and investors require bank loans. And, the ease with which they can get loans and the interest rates they have to pay determine the scale of their borrowings. Consumers require loans to buy big items like cars, consumer durables or real estate and investors require loans to expand business and refurbish/expand manufacturing processes. But for that to happen, the banking sector must be in robust health. Unfortunately, it is in a precarious health.

The banking sector has long been struggling under the burden of a huge amount of NPAs (non-performing assets) or bad loans which they are not able to recover. According to the RBI data on global operations (March 31, 2019), the aggregate amount of gross NPAs of public sector banks (PSBs) was at Rs 8,06,412 crore and that of scheduled commercial banks Rs 9,49,279 crore. The PSBs have a disproportionate amount of NPAs.

The willful defaulters of such loans have been the richest and most powerful people in India. There have been recent cases when there has been recovery of bad loans, like in the case of the State Bank of India which recovered money from Essar. Otherwise, they have had to write off bad loans from their balance sheets and this affects their profit margins.

The economic slowdown has made recovery more onerous and the recent Reserve Bank of India’s financial stability report points out the perils of the current economic problems. It has warned that there could be a rise in the NPAs of banks as a proportion of credit growth if the economic slowdown continues. The slowdown could cause the gross NPA ratio of local lenders to increase from 9.3 per cent to 9.9 per cent between September 2019 and September 2020.

According to the report, “This is primarily due to change in macroeconomic scenario, marginal increase in slippages and the denominator effect of declining credit growth.” The growth in credit has remained subdued at 8.7 per cent until September 30, 2019.

Some banks, on the other hand, have done well and witnessed stable asset quality in the first half of September. This has been largely due to recapitalisation of banks by the government injecting Rs 70,000 crore into the banking system since the last Budget. As a result, 24 banks had gross NPA ratios below 5 per cent, but four banks had gross NPA ratios higher than 20 per cent. It was large borrowers who hogged the loans and their total loan portfolios stood at 1.8 per cent in September 2019. Their share in gross NPAs was 79.3 per cent.

With the GDP growing at 4.5 per cent in the last quarter, loan recovery is bound to be slow. Besides, banks are reluctant to lend to micro, small and medium enterprises (MSMEs) which have registered a slow growth. Banks have become cautious in the face of the slowdown. Between November 2018 and 2019, gross loans to the MSME sector fell by 3.34 per cent to Rs 4.65 lakh crore in November from Rs 4.81 lakh crore in March 2019, according to the RBI data. The drop was 0.5 per cent from November 2018. Advances to medium-sized firms contracted 3.6 per cent as against the growth of 1.4 per cent during March-November 2018.

In other words, banks have become much more prudent in lending to the MSME sector and have become risk-averse. Even the PSBs have become very concerned about NPAs and are avoiding lending to companies that are less than investment grade. Banks have increased their risk premium and started to reduce working capital limits and according to one report, are effectively charging 16 per cent interest and are insisting on additional security from the MSMEs.

The MSMEs hold a very important position in the economy and their contribution to the GDP is around 30 per cent. Besides, they contribute 50 per cent of exports and employ 11 crore people. Unless the MSMEs are revived, there will be a problem in the reversal of the current economic slowdown and growth in employment.

Finance Minister Nirmala Sitharaman has given many sops to the MSMEs in recent times. Throughout 2019, the government instructed banks to disburse working capital loans to these businesses through new schemes and channels like loan melas during the festive season, the PSB 59 portal and older scheme like MUDRA and TReDS-based bill discounting platforms (an online platform for facilitating the finance process of the trade receivables of MSMEs). But banks have turned very risk averse and despite prodding by the government, are reluctant to disburse loans if they find that the particular credit is not commercially viable.

Banks have been warned by the RBI about mounting defaults under the MUDRA scheme (Micro Units Development and Refinance Agency limited) started by the government to refinance and develop micro enterprises by supporting financial institutions that lend to such businesses in manufacturing, trading and service activities. It may have helped many beneficiaries but now the main concern is the growing level of NPAs among these borrowers.

All these mounting problems are crippling the normal functioning of the financial sector. On top of it is also the nagging problem of the non-banking financial companies or NBFCs. They are in dire straits ever since the collapse of the IL&FS infrastructure company. Banks are reluctant to lend to them and they are having problems of liquidity. The NBFCs' asset quality witnessed stress and their gross NPA ratio rose from 6.1 per cent to 6.3 per cent in September 2019. On the whole, it is not easy for the NBFCs to function and carry on with their normal business and they are the main sources of finance for small consumers.

Thus unless the banking sector is brought back to health, one cannot expect a reversal of the economic slowdown this year. The big borrowers are still able to borrow, but the MSMEs are being squeezed of loans for not being viable in the eyes of bankers.