Covid-19 may have claimed the lives of more men, but it is proving equally if not more deadly for women. Few policymakers are using a gender lens to examine the accumulating evidence. Equal participation by women in decision-making — at 24%, still a distant global goal — could change that. Women are everywhere on the frontline of the pandemic, doing phenomenal work. 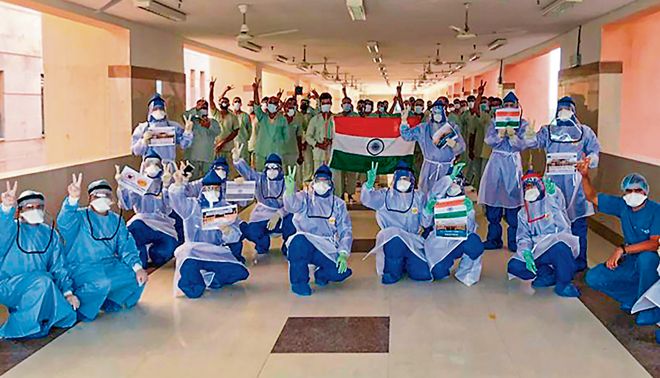 No respite: After the pandemic, new forms of virtual working will be much harder for women who have to shoulder the expanded burden of care and domestic work.

All crises and disasters affect men and women differently. Gender roles and gender inequalities inevitably determine the ways in which men and women bear the immediate and long-term impacts of natural disasters and disease outbreaks. But disaster responses have remained gender-blind. Gender disparities, in public and private spheres, have deepened the fault lines of this pandemic. Nearly three months into an unprecedented global lockdown, the gender impacts of Covid-19 are unfolding in many expected and sometimes startling ways. And once again, the world is mostly unprepared.

Globally, violence against women and girls has spiked. In many countries, sexual and reproductive health services are becoming a casualty to Covid-19 funding pressures, prompting ministers from 59 countries to call for urgent steps to stop this dangerous trend. Experts have sounded the alarm on the risks to women healthcare workers using personal protective equipment universally designed for men. Women, overwhelmingly in service and informal sectors deemed inessential in the lockdown, have lost jobs at faster rates than men. Women’s unpaid domestic and care work — tending to the household, children, the sick and elderly — has risen exponentially, affecting their ability to earn a living. While women academics have struggled, research papers published by men have soared.

The sharp rise in domestic violence has made the home the most unsafe place for women and girls, locking them in with their abusers and cutting them off from normal sources of support. The scourge of gender-based violence affects on an average one in three women worldwide. During the lockdown, it has reached the proportions of a shadow pandemic. Cases have more than doubled in India. They have tripled in the Hubei province of China, and have shot up in countries from Kyrgyzstan and Ukraine to the EU, US, and the UK, by a third to three-fourths.

Some governments have scrambled to respond. For example, India is among those that have introduced hotlines; France and the UK have launched web-based tools; working with UNDP, Montenegro has launched a mobile app for women to safely seek help and Serbia has ensured that courts prosecute complaints of violence without delay; Argentina, Germany and Norway have partnered with pharmacies to help women report covertly; and the police in Italy can remove the perpetrator from home.

But these measures are too few and far between. Much more can be done. Employees of shelter and support services for survivors can be classified essential workers. Police and prosecutors can better prioritise and swiftly adjudicate complaints of domestic violence. Neighbourhood watch groups can reach out to local communities. Violence is vastly under-reported, now more than ever: it is imperative that public service messages target violent men and shore up support for women who face violence, as often as they advocate safe practices like washing hands and wearing masks. Most of all, support must go to the millions of poor and disenfranchised women at daily risk of violence at home, who remain beyond the reach of hotlines and mobile apps, silenced by fear of discovery.

Governments have done much less to address another glaring gender impact of the pandemic: unpaid care and domestic work. Extended school closures, overstretched health systems and intensified household tasks have made this burden, mostly borne by women, much heavier. Globally, women do more than twice as much unpaid work as men; in India, women’s unpaid work is as much as six hours a day to 52 minutes by men. Almost everywhere, women work many more hours than men when paid and unpaid work is combined. This is even more starkly the case during the lockdown as women juggle home and work demands.

With unpaid work absent from most national policy agendas, vanishingly few governments have introduced pandemic measures that help to mitigate its impact — such as direct cash transfers to vulnerable households in India and Kazakhstan, vouchers for care in Italy, or paid sick and family leave in Belgium and Denmark. Women’s burden of care work scarcely figures in public service messaging aimed at role modelling and transforming gender norms to redistribute unpaid work. But no lasting recovery can be built on the backs of women.

This is because the immediate health and psychological toll of unremitting unpaid work can long outlast a crisis for women and girls. Evidence from past outbreaks shows that girls much more than boys have been pulled out of school to help at home, and women have lost or returned to jobs at much lower pay — with multigenerational household and societal impacts. Upskilling and reskilling for new and sophisticated forms of virtual working, which may fast become the post-pandemic norm, will be much harder for women shouldering the expanded burden of care and domestic work at home. Policymakers must look at the pandemic’s implications for gender gaps in workforce participation — countries like Turkey and India rank poorly in both women’s labour force participation and share of unpaid work.

Covid-19 may have claimed the lives of more men, but it is proving equally if not more deadly for women. Few policymakers are using a gender lens to examine the accumulating evidence. Equal participation by women in decision-making — at 24 per cent, still a distant global goal — could change that. Women are everywhere on the frontline of this pandemic, doing phenomenal and essential work as health workers, caregivers, service providers and researchers. But they are in far fewer numbers at the table. Little surprise that a petition by women in Italy demanding more of a say in the country’s recovery, gathered thousands of signatures in days, and brought women into the national task force. Covid-19 is an urgent reminder that crisis response is a project that must be shared, with equal say by men and women. That could make this and future pandemics less lethal for all.