The WEF came up with the startling news that India had slipped in Gender Gap Index, with ranking lower than China, Sri Lanka, Nepal and Bangladesh. One wonders why we are so behind our smaller neighbours. The gap was calculated in four areas— health, education, economy and politics. In health and economic opportunities, India was at the botttom. 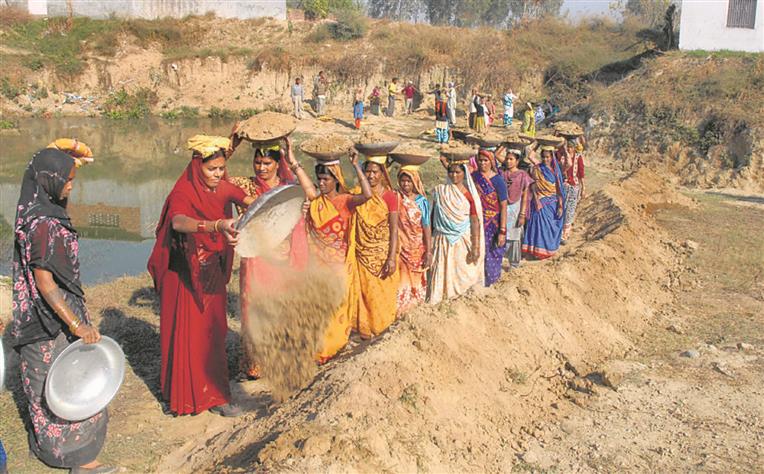 SHRINKING SPACE: According to the World Bank, there has been a large decline in labour force participation of women in India. AMIDST the news of a serious and continuing economic slowdown, there comes a small glimmer of hope that India may be doing better on the human development front. Though it has only climbed up by one point, the 2019 Human Development Report says that out of 189 countries, India is ranked 129, from 130 a year ago, according to the Human Development Index.

The Human Development Report, on the whole, has a more holistic way of looking at economic growth by not considering GDP growth rate alone, but also the other dimensions of development like life expectancy, education and health, in determining a country’s economic progress. This year’s report addresses the question of inequalities which is about the unequal distribution of wealth and power and analyses inequality in three steps — beyond income, beyond averages and beyond today — proposing a number of policy options to tackle it.

The poorest communities in South Asia are the most vulnerable to

climate change. They are expected to be more exposed to droughts from global warming scenarios with above 1.5 degree Celsius in temperature, in several countries of Asia. The rural population will also get a double shock of lower livelihood and a hike in food prices due to a drop in global yields.

The report finds that despite the progress, group-based inequalities persist in the Indian subcontinent, especially affecting women and girls. While East Asia and the Pacific have the second highest rank in gender development index, South Asia has the widest gender gap in Human Development Index. Surprisingly, the human development report notes that more Indian men and women were showing a bias in general social norms, indicating a backlash to women’s empowerment.

The World Economic Forum recently came up with a startling news that India has slipped to the 112th rank in Gender Gap Index. India’s ranking is lower than China’s (106), Sri Lanka (102), Nepal (101) and Bangladesh (50). One wonders why we are so far behind our smaller neighbours. The WEF has calculated gender gap between men and women in four key areas — health, education, economy and politics. In health and survival, and economic opportunities, India is at the bottom of the pile. The Gender Gap Index has tried to measure the disadvantages that women have vis-à-vis men in these areas.

In economic participation, we know how poorly Indian women are doing in the last few years. There has been a large decline in the labour force participation of women — 23.3 per cent in 2017-18 and 26.9 per cent in 2018 — and it was below the world average at 48.47 per cent in 2018, as per the World Bank. Women are also getting less economic opportunities than men due to various reasons. In the villages, women do most of the housework and other unpaid work and have no time to do the outside jobs but for urban women, even when they get jobs, there is concern about the safety of transport from the family, low pay and sexual harassment.

In access to health also, women have less access to healthcare than men due to the practice of patriarchy which gives preference to males and women themselves are trained not to complain overtly about their ailments so that very often, when the medical help comes, it is too late. The World Economic Forum also noted that four large countries — Pakistan, India, Vietnam and China — do not have the same access to health as men.

In education, female students are spending less years in school than the male students. The mean years of schooling for girls is 4.7 years, whereas for males, it is 8.2 years. Girls are often withdrawn from the school after they reach puberty and their education or skill training is cut short.Most of the schools also do not have separate toilets for boys and girls, which parents object to, and are reluctant to send their girls to school.

Another major source of concern in India is female foeticide and its consequence of having an abnormally skewed sex ratio at birth — 91 girls for every 100 boys. This practice, though closely monitored, is still going on in the villages. The Beti Bachao, Beti Padhao campaign seems to have some impact, but it is not universal.

India has, however, improved in the political empowerment sub-index at 18th place, largely because the country was headed by a woman for twenty years in the past fifty years. But political representation of women in Parliament is low at 14.4 per cent (ranked 122) and 23 per cent in the Cabinet. India also has very few women on the boards of corporate companies.

It is indeed a shame that from 2006, when the first WEF gender gap report started, India has slipped four spots on gender parity. Bangladesh has the highest gender equality in the region. India’s economic power would be greatly enhanced if women were given proper healthcare, education, economic opportunities and if they could be better represented in the political institutions across the country.