Nations are coming together for the strategic containment of its ambitions 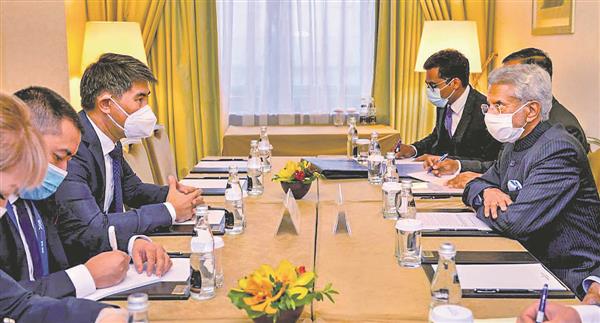 Unyielding: China had not bargained for the determination of the Indian Government and armed forces to fiercely resist its territorial ambitions in Ladakh. The strength and resilience of a country are determined by the courage and fortitude its people manifest, when they face challenges, or are threatened. The people of India faced their most serious challenge when the country was engulfed, in 1918, by a deadly flu pandemic, in which an estimated 14-17 million people died. Over a hundred years later, India, like the rest of the world, is facing a similar challenge from the coronavirus pandemic. This pandemic has been accompanied by a serious military intrusion by China. Under Xi Jinping’s leadership, China is seeking to become a dominant power in the world. China often uses its military muscle to fulfil its territorial ambitions, across its entire Asia-Pacific neighbourhood. What China had evidently not bargained for, is the determination of the Indian Government, armed forces and people to fiercely resist its territorial ambitions in Ladakh.

External Affairs Minister S Jaishankar and his Chinese counterpart Wang Yi met in Moscow recently to urgently address issues pertaining to border tensions. The main decision which emerged was that both sides would avoid any action that could escalate tensions, while abiding by their past commitments and agreements to maintain peace along their border. The actionable part was that the army commanders of India and China would soon meet to continue their dialogue and pull troops back. This Chinese incursion was accompanied by crass jingoism, threats, bluff and bluster in the Chinese media against India, voiced by the Chinese Communist Party’s international mouthpiece, the Global Times.

China’s tantrums became sharper after the implications of India’s counter-moves across the Pangong lake sank in. After taking control of the high mountain tops in this region, the Indian Army has positioned itself to block Chinese forces which challenge its access to the Depsang area and the Daulat Beg Oldie airfield. India can now freely move across the region, as it has in the past. New Delhi is ready for a dialogue between military commanders. China, however, has serious issues it has to address, on its side. Areas which it now controls will be largely submerged by the coming winter snow, which commences in October. Unlike their Indian counterparts, who have lived through winter in Siachen, the Chinese do not have similar battle experience. There should be no question of any withdrawal from areas that India now controls in Ladakh, till China agrees to exchange maps on the exact location of the LAC, and serious negotiations for resolving the border issue make headway.

Then PMs Manmohan Singh and Wen Jiabao concluded an agreement in 2005 on the ‘Political parameters and guiding principles for settlement of the India-China boundary question’. The agreement noted that the ‘boundary should be along well-defined and easily identifiable natural geographical features, to be mutually agreed upon by the two sides’, and that the two sides ‘shall safeguard the interests of their settled populations in border areas’. China refuses to define the contours of the LAC that it claims to respect. It uses this ambiguity to its advantage by laying down arbitrary claims to territory without any sound historical basis, or evidence.

It is equally important now for India to make use of the fact that there is growing international concern at China’s arrogance. Unlike his predecessors, President Xi Jinping enjoys an aggressive display of economic and military muscle. China ignores international conventions and seizes, or seeks to seize, control of maritime areas of its neighbours across the South China Sea. It also behaves aggressively on territorial issues with Japan and Taiwan. Remembering its humiliating defeat, when it invaded Vietnam in 1979, China is particularly harsh in threatening Vietnam, whose ships are accosted regularly, on what are Vietnamese waters. ASEAN countries have now joined hands and demanded that China should abide by the UN Convention of the Law of the Seas, which it has been found guilty of violating by an international tribunal, whose verdict it rejected. Foreign Minister Wang Yi had a hard time when his hosts in European countries he visited recently, including Germany, France, Norway, Italy and the Czech Republic, expressed concerns on issues ranging from human rights violations in Xinjiang and Hong Kong, to Huawei’s 5G ambitions.

China’s focus on relations with India is predominantly aimed at redrawing its borders, while marginalising Indian influence regionally and globally. It has also sought to exploit India’s rule-based trade and investment policies. Developing countries across Asia and Africa are now finding that they are unable to repay credits (described as ‘aid’) extended by China. They are then compelled to grant China access to their mineral resources, electrical power, and ports for military use. Across our Indian Ocean neighbourhood, such fears are rampant in countries ranging from Tanzania, Kenya and Ethiopia to the Maldives, Sri Lanka and Myanmar. New ‘enthusiasts’ for Chinese assistance, like the Oli regime in Nepal, will soon be compelled to join those already disillusioned about Chinese aid. China’s much-touted One-Belt One-Road project, which includes CPEC, is turning out to be a white elephant. Despite this, China will continue its policies of backing Pakistan militarily, economically and diplomatically on the Kashmir issue. India has no choice but to deal with these challenges.

A key element in India’s strategy to deal with Chinese assertiveness and territorial expansion is the formation of Quad, comprising Australia, Japan, the US and India. China is already showing signs of concern and nervousness at this development. Quad should associate Vietnam and Indonesia in its maritime security activities. It should also have a European dimension, through a close association with France. Strategic containment of China’s ambitions requires a significant measure of global cooperation.