Parties in power at state and Central levels, Opposition, judiciary, magistracy and police had abdicated their responsibilities and remained bystanders in Delhi. As to why there was this inaction at all levels is a serious question that needs to be probed and responsibility fixed 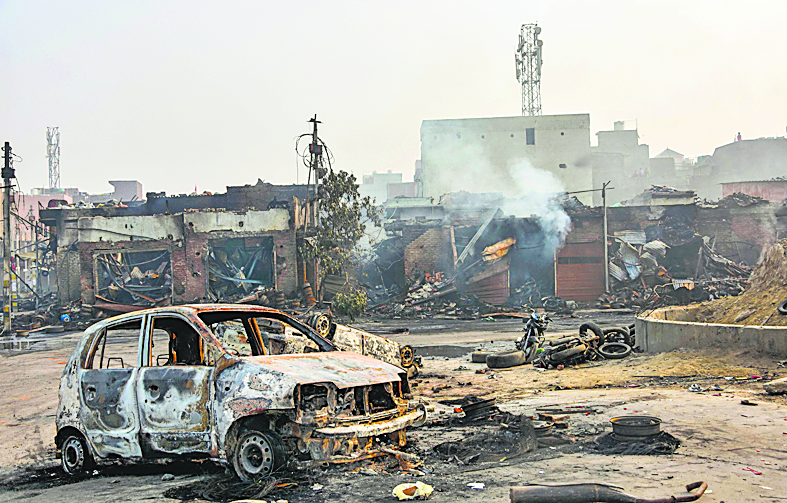 The recent breakdown of law and order in north-east Delhi has brought out some very poignant facts about our political and administrative culture. This situation did not develop overnight but had been building up gradually due to the protest at Shaheen Bagh and the impending Delhi Assembly elections. The run-up to the elections was full of such vitriolic rhetoric as had never been heard before. The atmosphere was, thus, already charged with developing tension among various communities. However, the Aam Aadmi Party won a landslide; and people were looking forward to another five years of development and good governance.

Things changed overnight and clashes broke out at various places in north-east Delhi where mixed communities have been living together for decades. It has been alleged by residents that those who indulged in most of the carnage were from outside their localities. Coming to the couple of points that I wish to make here — the first is the total absence of the political class during all those four days of arson and looting. There must have been Members of Parliament from these areas (all seven MPs are of the BJP) and there must have been MLAs (62 of 70 are of AAP). Apparently, no MP, no MLA and no office-bearers of any political party visited those areas and made any attempt to pacify the people and bring peace.

Even the Congress party, which has no MLA in Delhi but does have some infrastructure, did not make any attempt to send its leaders to the riot-affected areas. It was a tragi-farce to see the Delhi Chief Minister, Arvind Kejriwal, and his cohorts visiting Rajghat as if a solution to the problem lay at Mahatma Gandhi’s ‘samadhi’.

They should have known that, in the face of such violence, Mahatma Gandhi, had he been alive, would have gone and stayed in the riot-affected areas and peace would have been restored. One has only to remember Noakhali (now in Bangladesh) and what he did there. In short, the Central government, the Delhi government and Opposition parties at the national and state level failed to make any appearance in the violence-hit areas. Their representatives started visiting the riot-affected areas only after peace had been restored. This was a total betrayal of the people of Delhi and their faith in the ballot box.

Now, let’s come to the role of the civil and police administration. The residents of the affected areas have reportedly stated that the police presence on the ground was very thin on the first three days, but increased later on. They further alleged that even where the police personnel were present, they did not intervene and remained silent observers. The magistracy was also nowhere on the scene. It must be remembered that the Lt Governor of Delhi is the head of the administration — nowhere did I read any report of his presence on the ground in the first few days.

One of the first steps taken in such a situation is the setting up of peace committees and activating them. Actually, the district magistrates and police officers should have formed these committees in normal times and held regular meetings with them so that they could be briefed about what to do in such terrible situations. It has been reported that more than 13,000 phone calls were made to the police control rooms, but most remained unanswered and logs of these control rooms and police stations do not indicate any action taken on those calls.

The judiciary, too, at all levels failed to respond throughout this crisis and make any attempt to activate the executive to do its duty. There was no suo motu recognition of the situation which is done in many other cases.

To sum up, the parties in power at the state and Central levels, Opposition parties, the judiciary, the magistracy and the police had abdicated their responsibilities completely and remained silent bystanders. As to why there was this inaction at all levels is a serious question that needs to be probed and responsibility fixed by a judicial inquiry at the level of a sitting judge of the Supreme Court or by a commission of inquiry headed by eminent jurists and citizens of integrity.

The only silver lining in those dark days was the helping hand that the people extended to each other across the communal divide. The work of certain non-governmental organisations (NGOs) is also commendable.

Hundreds of people have moved out of their burnt homes and are being housed in temporary shelter homes set up by the NGOs. Certainly, these voluntary organisations are not in a position to replace the work of the government in such terrible situations. The government is required to make massive efforts to arrange accommodation, sanitary facilities, power, water and medical help.

Political parties in power or in Opposition should make collective efforts to bring peace to these areas. Peace committees should be established and officers of the civil administration should be an integral part of these committees. After all, it is a matter of restoring the confidence of citizens in the elected governments at the Central and state levels. If this confidence is not restored in the political and civil administrations, the future of democracy will be at stake.

Above all, a time-bound judicial inquiry at the level of an SC judge would go a long way in identifying as to what really led to this large-scale violence. The proposed judicial commission should also frame some guidelines to avoid the recurrence of such incidents in future.

— The writer is ex-chairman of UPSC & former Manipur Governor