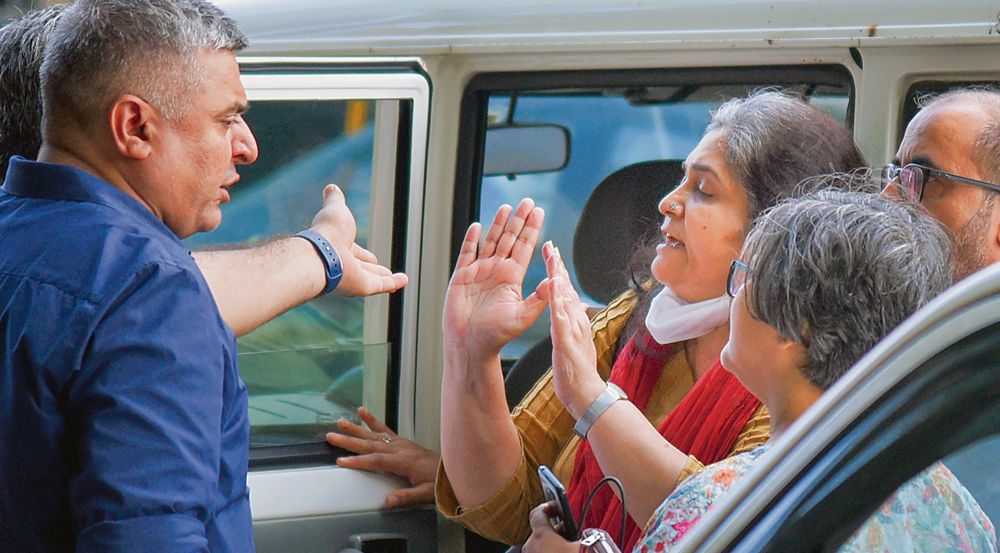 Crusader: Teesta has gone about her mission relentlessly and was responsible for the conviction of a BJP minister in fomenting riots in Ahmedabad in 2002. PTI

I had great faith in the judiciary. Alas, I have lost it. Like other institutions, the media in particular, it has caved in or is in the process of doing so. I did not expect the court to swim against the tide and hold our powerful PM complicit in the attack on Zakia Jafri’s husband, but no sensible Indian expected the topmost judicial authority to make extremely disparaging remarks against Teesta Setalvad and RB Sreekumar and accuse them of a pre-planned conspiracy to harm PM Modi!

The Gujarat Police’s swift action against their own one-time senior, RB Sreekumar, was surprising.

These remarks were immediately picked up by BJP stalwarts and a politicised Gujarat Police to register an FIR against these two for conspiracy to harm an innocent man, who incidentally had not received the clean chit from his own senior at that time — PM Atal Bihari Vajpayee, a man of principles.

I have known Teesta and Sreekumar for many years. Teesta was responsible for the conviction of a BJP minister in fomenting the riots in Ahmedabad in 2002. Another one jailed for leading the mobs was Babu Bajrangi, a notorious Muslim baiter from the Hindu far-Right. Teesta went about her mission relentlessly and succeeded. The courts, especially the Supreme Court, saw the justice in her pleadings and helped the process of delivering it.

Perhaps the steady support of the courts had made her believe that she would succeed again but this time the target was one that even the most intrepid of today’s judges would hesitate to touch. But to pass those unnecessary strictures that an eager leadership was bound to pounce on to extract revenge was not expected.

Teesta belongs to an eminent jurist clan known for its integrity and passion for justice. Her marriage to fellow journalist Javed Anand strengthened her desire to take up the cause of a minority under siege. Anti-Muslim sentiment has always been a feature of existence in our land. It was accentuated when Rajiv Gandhi overturned the Supreme Court’s sensible judgment in the Shah Bano case.

The allegation that the Congress was pampering the Muslim minority for electoral gain was now firmly embedded in the Hindu mind. The Congress only conceded the demands of the mullahs on religious matters. That was not the designated role of government, any government in power. It should keep religion out of its purview. The charge of pampering for electoral consideration could hold only in the party’s dealings with the Islamic clergy. The party could have helped a poor minority if it had diverted attention to education and health instead.

At a gathering of Muslim leaders, I voiced this opinion and I was promptly berated. Only Javed Anand supported me. He, too, was shouted down. That experience made me aware that a common meeting ground to ensure communal harmony was not going to be easy.

Just as I believe that Teesta’s campaign for justice for a beleaguered minority has its origin in compassion, the Gujarat Police’s swift action against their own one-time senior surprised me. Sreekumar, the son of a freedom fighter from Kerala, spent more than a decade in the Intelligence Bureau before reverting to the state. He was promptly made head of the state’s Intelligence apparatus, for which he was eminently suited.

When the Godhra train burning took place, Sreekumar was on leave. Otherwise, as a senior officer in charge of Intelligence gathering and analysis, he would have been present at the meeting called by Modi at the CM’s residence that night. His assistant, Sanjeev Bhat, was too junior to be given access and had to wait in another room till the instructions were handed down to him by the DGP. A contingent of the Army requisitioned in aid of civil power, led by a Lt General, was kept twiddling its thumb on the tarmac as no instructions for deployment were given to the General, despite his personal call on Modi at his residence.

I learnt that the instructions were to go slow for a day. This piece of information was enforced by the non-deployment of the Army contingent. Any expectation that riots will stop at a given signal is misplaced. Once the mob assumes an identity of its own, separate from that of the individuals that compose the mob, there is no way to control the insanity till, like the eye of a storm, it dissipates.

There are very few officers with spine, like Sreekumar, left in the service today. After this judgment and the action initiated by the Gujarat Police, there will be even less. Those who enter the IPS will have to be trained in a different form of jurisprudence that tells them to follow the master’s orders, ignoring truth, justice and the rule of law.

Another development that will follow Teesta into police custody is the reluctance of activists to cross swords with the powerful force that has taken over the governance of the country. I remember the words of NSA Doval in his address to IPS probationers at the last passing-out parade in Hyderabad. He told them that the next big enemy to be combated was ‘civil society’!

We now know what he meant. NGO activism should stop at the Laxmanrekha. It should not touch the PM, as Teesta tried unsuccessfully to do. India is not the same type of democracy like the US or the UK. Our PM is too sacred a figure! In a recent statement, he even mentioned that Indian democracy preceded that of the British! I had not heard that one before. Even the unemployed youth, too numerous to count, can do nothing to shake the public perception of him as a messiah sent to save the country from perdition.

Never try to bang your head against a wall. It is your head that will crack. Teesta should have been briefed by her advisers before embarking on this project. I know her as a person who bashes on regardless. Her venture against such a powerhouse was bound to end as it did.